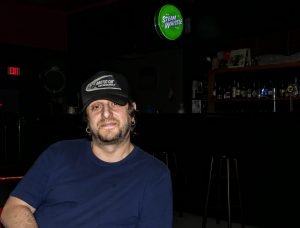 McCloskey’s manager Daniel Riitano, with sign in background highlighting one of the craft beers on tap, in this case made by Steam Whistle Brewing.

CHESTERVILLE — Toronto native Daniel Riitano has found himself a new canvas to engage his passions for both art and the bar business — at Chesterville’s historic McCloskey Hotel, or McCloskey’s as the locals generally know it.

An accomplished muralist with over two decades experience running bars in The Big Smoke, Riitano made the eastward trip down the 401 this past winter, to take up a new challenge as manager of the vintage venue that’s been an institution in this charming, rural village on the South Nation River for over 150 years.

Their younger manager hopes to fulfill the original vision of turning it into a happening place that combines an in-house community of artistic and creative pursuits with a popular bar capable of drawing compelling musical acts to the stage. Add to that regularly available food like pizza, tacos and quesadilla and excellent craft beer like that made by Beau’s All Natural Brewing Co. to boot. Riitano, 46, has also put Steam Whistle Pilsner on tap — he’s personally acquainted with the proprietors of the Toronto-based brewery — and will shortly offer the product of Hamilton’s Collective Arts Brewing.

“We really want to promote the music, the art and food and drink,” he says from McCloskey’s on a recent quiet afternoon. “I haven’t even come up with a full drink menu yet, but we’re introducing a few different things that people get a kick out of, just to give them a change of pace, something different from what they’re used to. And I think the food will do the same,” he says, emphasizing, “As a professional, I want to know that we’re prepared to do it right, every night.”

Riitano continues to experiment in the kitchen as he “gets his feet wet” in Chesterville: Guests have variously tucked into chicken, Caesar salad and specialty pastas, he says. “We want to introduce something a little different. Nothing fancy. They’re all simple, easy dishes but different enough from the typical bar and pub food. And not necessary high-end dining, either, just something in the middle.”

Describing himself as “first and foremost an artist and designer,” he spent four years at the Ontario College of Art and also studied in the Fine Arts department at York University. He made an impact painting 3-D wall murals for high-end urban clients. But being in the bar business allows him to “combine all of it,” he says, noting the fusion of fine food, alcohol, music and art.

In line with that thinking, he hopes to introduce a regular weekly paint night and drawing and painting classes at McCloskey’s, where he’s also establishing a personal studio in a corner room on the second floor. For those more at ease with a cue than a paint brush, he’s also setting up a weekly pool league. And there’s talk of adding a used book store off the hotel foyer.

On the musical side, he still has connections to the Toronto scene and plans to harness that to the benefit of his patrons. A childhood friend of Juno-nominated artist Jason Wilson — Riitano says they grew up together in the same tough Jane and Finch neighbourhood — he hopes to arrange an appearance by the reggae musician on the local stage, possibly later this month.

He also mentions another acquaintance of his, Chris Cadell, an accomplished musician who also happens to play in Colin James’s band, as a coveted potential visitor to McCloskey’s. And, he says, it’s through this connection that he’ll see if even James himself might stop by the venue this summer. 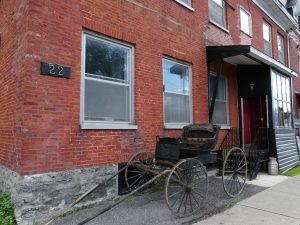 A vintage buggy adorns the front of McCloskey’s, a recent edition to the streetscape at 22 Victoria Street, Chesterville.

He was also delighted when respected jazz musician and percussionist Jason Nett recently dropped in and performed an impromptu set after his Ottawa show. “I wish I could have promoted it… The 20 people in the room got a kick out of it.”

It was the Breakses’ daughter who first persuaded Riittano to check out the goings-on at the Chesterville establishment about three or four years ago. He says it was the focus on the arts, similar to what he was doing at his own Toronto establishment, that ultimately got him to pull up stakes for a quieter life in eastern Ontario.

“I just think it’s a great town. I love being here,” he says.
Growing serious for a moment, Riitano explains his goal of running a bar where everyone is respected, safe, happy and enjoys themselves. “I want everyone to feel comfortable. It is a whole philosophy that I have with regards to this business.” He points out that people choose to go out for a reason, rather than stay in. “And as a manager, I want to give them that reason for coming, and respect that reason that they come. There is a little psychology behind it.”

Compelling music hits the stage at McCloskey’s through the remaining weekends of July, starting with a July 9 show featuring Ottawa alt-rockers Muelkik, War Fair, The Tenenbaums, The Borrowed Blues, and Saskatchewan’s Beer League. Friday, July 15, sees the Amanda Keeley Band play the venue, with more talent from the Nation’s Capital scheduled for the following evening on Saturday, July 16: Emmas Ringer, Tribe Royal, and The Dead Centuries. McCloskey’s then hosts The Bigmuffs on Saturday, July 23. The video below shows The Tenenbaums at McCloskey’s on July 9.