In dollars, the construction of the Port of Johnstown’s new marine terminal cost about $35-million. But that industrial project also exacted an environmental cost on fish habitat at the St. Lawrence River site just outside Prescott.

As a condition of project approval through the federal Fisheries Act, the developers built replacement habitat 40 km to the east, carved out of a reedy riverbank area opposite Riverside Heights in the Municipality of South Dundas. This “embayment” initiative was undergoing finishing touches — the planting of trees on levelled-out river mud placed on shore — when officials celebrated the occasion at the site July 22.

The mayor of Edwardsburgh/Cardinal, whose municipality owns the Port, enthusiastically acknowledged the event as a milestone conclusion for the broader terminal project, which began in 2007. “This will actually be  the last formal ceremony winding up the project,” said Pat Sayeau, adding the federal and provincial governments released their final $3-million contribution toward the completed terminal expansion just a day earlier.

Similarly funded by both senior governments in partnership with the Port, the embayment work cost $400,000 and was the last of three remediation projects intended to compensate for fish habitat sacrificed to accommodate the Port’s new wharf, according to Sayeau.

Located on lands owned by the St. Lawrence Parks Commission, the initiative was overseen by South Nation Conservation and also involved the Mohawk Council of Akwesasne as an environmental partner.

Between October and December 2014 — a time of lower water levels in Lake St. Lawrence — an excavator dug a series of channels — 10 meters wide and 1.2 meters deep — through a large area of cattails.

In the video above, Township of Edwardsburgh/Cardinal Mayor Pat Sayeau makes a foray July 22 into the neighbouring Municipality of South Dundas to celebrate a completed “embayment” project undertaken to re-mediate fish habitat losses at the Port of Johnstown, which is owned by Sayeau’s township. South Nation Conservation past president Bill Smirle also addresses the press conference. 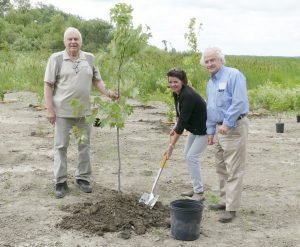 Planting a tree on the levelled-out area excavated from the river are, from left, Bill Smirle, Susan LeClair and Pat Sayeau. Newly planted trees have replaced about 200 others that were cut down to make way for the excavated river mud. (Note: More information has been added to this caption since it was first published.)  Below, part of a channel, as seen from shore last week.
Zandbergen photos, Nation Valley News 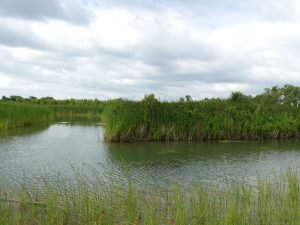 A portion of new channel, as seen from shore July 22. 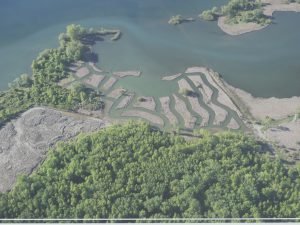 The channels as they appeared in the spring of 2015, following their excavation the previous fall and winter.  (Note: This caption was changed to correct the time that the aerial photo was taken.)