South Dundas firefighters in the municipality's rescue boat (foreground) and SD&G OPP officers in their rescue boat (background), view the ditched plane around 10:30 a.m. on Aug. 8. The pilot was uninjured after making his impromptu landing on the St. Lawrence river about 45 minutes earlier. Zandbergen photo, Nation Valley News

IROQUOIS — A small plane ditched in the St. Lawrence River at Iroquois on Monday morning, Aug. 8, but the pilot emerged unscathed from the incident.

Chris Paulino, assistant to the municipality’s incoming director of fire and emergency services, said the man swam to shore after engine trouble compelled the impromptu landing in the river instead of the nearby runway at  Iroquois Airport. The pilot was otherwise none the worse for wear, according to Paulino. “The pilot didn’t go away in an ambulance,” he clarified. “He had a scratch on his nose, and that was pretty much it.”

The plane was making a final pass in advance of touching down at the airport, owned by the Municipality of South Dundas, shortly before 9:45 a.m. “Something happened to his motor and he came down,” said Paulino, adding the pilot made an otherwise “good” landing on water under the circumstances.

A local boater quickly arrived on scene and helped tow the single-seat plane close to shore. Relatively undamaged except for some tears, the aircraft now sits at the airport since its retrieval from the St. Lawrence.

“I was there! Spoke with pilot. He’s ok,” Heather Robinson reported in a post on the Nation Valley News’ Facebook page, less than three hours after the incident.

Robinson indicated she saw the pilot with a boater and lifeguards from nearby Iroquois beach. “When I got there a boater had the pilot in his boat and the life guards were both with the boat. I wasn’t able to see if they helped the pilot out of the plane and into the boat or if the boater helped him alone.

The South Dundas Fire Department rescue boat and an SD&G OPP police boat were both dispatched to the scene after the pilot put out a mayday call. A Canadian Forces Hercules plane also made three flyovers as an apparent result of that protocol.

Note: This story has been updated with new information as it came available through the day.

SD&G OPP and South Dundas Fire Department officials were still on scene at the site as of 11:30 a.m. this morning, according to staff at the municipal office in Morrisburg, who had no further information on the late-breaking situation at that time. Zandbergen photo, Nation Valley News

Video below shows the South Dundas Fire Department rescue boat alongside the downed plane in the St. Lawrence . 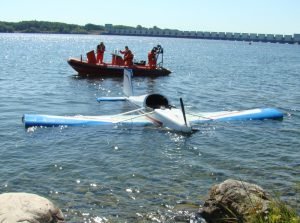 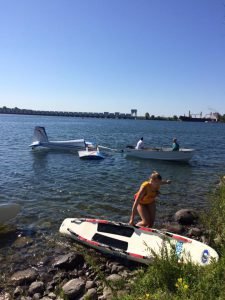 Heather Robinson provided this courtesy photo she took before emergency crews arrived on scene. It shows an Iroquois beach lifeguard with paddle board emerging from the water, near the scene, while a local boater assists with towing the little plane to shore — ostensibly with the pilot also riding along in the boat. Courtesy photo via Facebook