Lit by a full moon, the South Mountain fairgrounds buzzed with children, teens and families enjoying the return of the midway. Zandbergen photo, Nation Valley News

SOUTH MOUNTAIN — The 124th South Mountain Fair kicked off on a beautiful day leading into a bright, moonlight night.

Aug. 18 saw the fairgounds re-animated with the sights and sounds of the midway, the sizzle of tasty concessionaire food, the applause of annual opening ceremonies, and the roar and black-smoke belching of the truck pull.

Kerosene Creek takes the stage 8 p.m. in the refreshment tent tonight, an hour after the demolition derby (another highlight of the fair) hits the accelerator.

The fair offers plenty of traditional competitions and shows, including poultry, 4-H cattle, tractor pull, various horse shows as well as homecrafts filling up the exhibition hall. It’s also known for its baby show and the amusing spectacle of youngsters getting their best grip on wriggly swine during Saturday’s greasy pig contest. 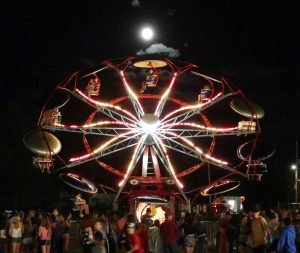 Above, a bit of action from Thursday night’s truck pull at South Mountain Fair. First segment shows “grandmother Gloria” in the pro-street diesel class; the next is a whisper-quiet truck competing in the work-stock class; and the last shows a local’s roaring launch, only to suffer a mechanical breakdown (rear drive-shaft).