Big guitar sound
Michael 'tic' Houston poses with a prop that debuted at the Barnstorm venue, his rural backyard, off Conc. 3-4 in North Stormont, in 2017. Zandbergen photo, Nation Valley News

FINCH — Michael ‘tic’ Houston has put his life on hold the last four months, toiling yet again to transform his old farm property into a very cool music concert venue.

“The fire pits are stocked, and the lawn is mowed,” says a tired-looking Houston, ticking off a couple of items crossed off his 15-day countdown list, which runs several pages long.

He’s added a handful of new attractions to the rural venue, where a hip-roofed barn serves as stage and central venue. Each year, the event features several hours of live entertainment amid lasers, eclectic decorations and lighting effects that are Houston’s forte. He’s particularly fond of repurposing old satellite dishes into light reflectors and has added several more for the 2016 edition.

“It’s a $2,000 loss every year,” says the organizer, who explains his motive is simply to “bring the city to the country” with each Barnstorm, not to turn a profit. The event also serves as a de facto fundraiser for his radio show, as he gives away tickets as prizes in return for donations to the community station, “a value of almost $2,000 to CKCU.

“It’s a party, but to me, it’s also an event. It’s a production,” he says, leading a tour of the new RV shelter — doubling as a theatre to watch a live broadcast of the last Tragically Hip concert — as well as the barn, the silo, the shipping container, and other quirky spots on the property.

As for next year, Houston suggests he will return to a date after Labour Day in 2017. He’s also looking for more help setting up the grounds, suggesting it would be a great opportunity for local high schoolers looking for community service credit.

Note, this article was edited to correct Houston’s former position with the Ottawa police. 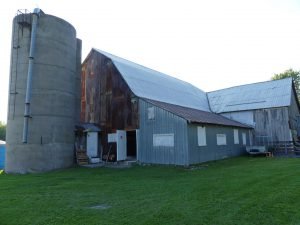 The concert venue is pastoral in the daytime, but a lit-up spectacle at night, inside and out. Even the interior of the silo serves as a unique, echo-filled hang-out spot, affording a view of the stars above from inside the concrete tube. Zandbergen photo, Nation Valley News