CHESTERVILLE — The show must go on, and for Canada’s AC/DC tribute band Great Scott, it certainly did at the Chesterville Fair.

The band performed Friday night (Aug. 26) despite the death of guitarist Ricky Trudeau a day earlier. The 51-year-old Trudeau was recently diagnosed with lung cancer.

Early in the show, lead singer Albert Bouchard raised a plastic cup on the Beer Tent stage and paid tribute to their late bandmate, before launching into another high-voltage AC/DC cover tune.

“There’s another empty seat at our head table tonight. For those of us left behind, all we can do is raise a glass, hold onto each other for dear life, and celebrate how truly blessed we all were for having had the honour of sharing the stage with one of the coolest cats we’ve ever met,” the band said in a statement released Aug. 25 on their Facebook page. “Our brother Ricky left us today. A fully fuelled orange Harley ascending into the sky has deafened the world he leaves behind. He will forever be tattooed on our stage….”

The band’s old friend and former guitarist Alan Brown has been standing in for Trudeau since March, according to lead guitarist Scott Mahar, the ‘Angus Young’ of the group. Mahar told Nation Valley News that Trudeau last  played with Great Scott during a Halloween 2015 show at the Brass Monkey in Ottawa, opening for the Killer Dwarfs.

“Yeah, it’s been an emotional few days for us…. It’s been a tough year for us actually,” Mahar said in an email.  “I won my battle with cancer in November, and another of our alumni, drummer Kevin Spero, passed away in March from a heart attack. I guess you can say we have some mighty angels on our shoulders.”

Great Scott is scheduled to play next at the Russell Fair Sept. 9.

This article was edited to reflect correspondence received from Mahar.

Some video footage of the Chesterville show appears below. 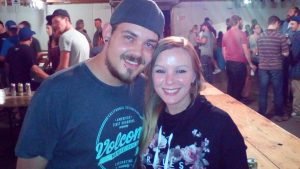 Friends Austin Jurgens, 20, and Josie Rennick, 31, enjoyed the Great Scott show and also took in the Riq Turner band the following evening, at the 2016 Chesterville Fair. They plan to return to the Fair next year. Zandbergen photo, Nation Valley News