CHESTERVILLE — The late Adam Wicks was remembered before Saturday night’s Demolition Derby at the Chesterville Fair — the second Dundas County derby to pause in memory of the young man.

Locals were shocked when the married father of three died Aug. 19 of heart failure at the age of 31, the same day he would have driven in the South Mountain Fair derby, likely to be followed by the Chesterville Fair version a week later. Wicks was a regular entrant in both derbies over the years.

“Demolition derby is a family. It doesn’t matter where you go, whether you’re in Chesterville, whether you’re at the CNE, down in Windsor, or anywhere across the country, you always know when you’re in demolition derby family territory,” began the Edge-Motorsports announcer. “Chesterville and South Mountain, you lost one of your demolition derby family rather recently … It’s people like that who make these events special,” he said, referring to Wicks and highlighting his status as the father of three little girls. “It’s what our future is, young families across the country,” he said, inviting the crowd to join him in a moment of silence, which officially ended with a siren blast from the Chesterville Fire Department and applause from the crowd.

A more elaborate ceremony in Wicks’s honour also took place on derby night at the South Mountain Fair, Aug. 19. A recently concluded gofundme campaign in support of his widow, Heather, and their three daughters — ages 1, 4 and 6 — raised over $18,500 in 10 days.

Video of the Chesterville pause for Wicks appears below.

The show went on, of course, with one of the highlights being a car entered into the competition by the Chesterville Fire station. Each year, local firefighters prepare a vehicle and raffle off the opportunity to drive it in the Chesterville derby. The winner this time was Pat Feeley, who allowed her daughter’s fiance, Alex Krumins of Chesterville, to take the wheel of the repurposed police cruiser in her place. 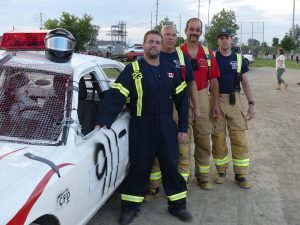 Alex Krumins (left) accepts the keys from firefighters Jimmy Henderson, Chief Mike Gruich, and Matt Thompson. The video below shows some of Krumins’s performance in his class, where the actual (former) police cruiser went up against another car painted like one. The latter car smacked one of the concrete blocks encircling the field in front of the grandstands.  Zandbergen photo, Nation Valley News

The video below shows the end of the first heat in the small car class, with Andrew Marsolais nudging out Morrisburg’s Tanesha Richardson.