INKERMAN — Not only did Grandpa Jack make his first eastern Ontario appearance, he took chivalrous action to save a young fan’s day. 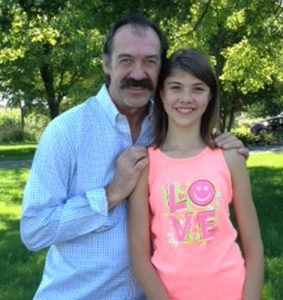 They never did make it to Liberty Lane Farm, though, where Johnston was the featured entertainment at a horsemanship symposium. Instead, Bell’s car broke down on County Rd. 43.

But guess who strode up the nearby Terrace Green Bed and Breakfast laneway to assist the mother-daughter duo? Grizzled Shaun Johnston, of course, accompanied by his musical sidekick, Steve McMullen. They hadn’t left for the farm yet.

“I told  them how much of a fan my step daughter was, so he asked if she wanted a picture with him,” recounted Madore in an online chat with Nation Valley News. “He was very nice and friendly but clearly knew nothing about cars. He proceeded to crack a joke that he just wanted to walk up and touch stuff and magically save the day.”

Her daughter was “absolutely thrilled,” she said.

Later that evening, Johnston and McMullen regaled an audience of instructors and symposium attendees. A guitar on his lap, the mustachioed actor interspersed musical numbers with reminiscences and revelations about Heartland and expressed his particular admiration for young co-star Amber Marshall, who joined the cast when she was only 17. Smiling and joking through the set, the affable Johnston also revealed that Grandpa Jack’s mane of grey hair is, in fact, a wig that gets replaced every season.