INKERMAN — The first-ever Weekend Horsemanship Symposium at Liberty Lane Farm concluded on a high and emotional note for organizer Lorie Duff and her guests, including featured Texas horsewoman and trainer Barbra Schulte, who received special recognition via the Royal Canadian Mounted Police.

“We award this in appreciation to Barbra Schulte, an iconic forewoman in the equine industry and a role model to all female equestrians, the great equestrian woman,” said Duff, while a pair of RCMP officers handed over a print depicting some Mounties on their trusty steeds. “Thank you, Barbra, for all that you have given us, and all that you still have to give us.”

“I feel very grateful … deeply grateful. This weekend has been one of the most special of my career,” said the American horse whisperer who is widely respected in the industry as a trainer, clinician and author. “Canada’s very special to me, and Lorie, I mean, she thinks of everything, and she makes everybody feel special.

“Isn’t that what we’re doing this weekend? We are empowering our horses, we are empowering each other. We’re learning to feel strong and confident in ourselves and how you do that,” added Schulte, expressing thanks at being so honoured. 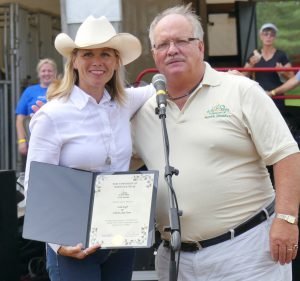 The Aug. 26-28 equine retreat and clinic drew about 40 riders and several coaches for a special clinic by the National Cowgirl Hall of Fame member, at the rural Township of North Dundas venue.

The closing ceremonies saw several coaches and trainers give emotional testimonials about the weekend, Duff’s hospitality, and the opportunity to learn from Schulte. “I’ve really struggled being in front of people, but I think I’m really confident now in my coaching, and I really appreciate it,” said Abigail Hansford of St. John’s, Newfoundland and Labrador. 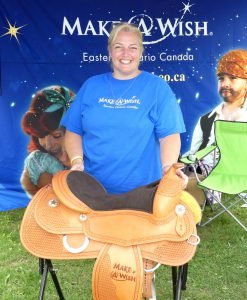 Janet-Lee Ferris, Manager of Fund Development for Make-A-Wish Eastern Ontario, poses with the $3,000 reining saddle that was raffled off at the weekend symposium. Proceeds of the draw for the donated Continental Saddlery piece went to Make-A-Wish Eastern Ontario. A painting by Theresa Reuter was also put up for raffle in support of the cause. Zandbergen photo, Nation Valley News

Duff “is a an angel … a gift to every one of us,” said Melanie Gray of Owen Sound, describing the weekend as “amazing.” Gray tearfully acknowledged what it meant to meet Schulte. “She has no idea of the impact she had on me, so many years ago….”

North Dundas Deputy Mayor Gerry Boyce delivered a municipal certificate of appreciation to Schulte. “Thank you, Barbra. It’s an honour to have you here,” said Boyce, who also surprised Duff with similar recognition. “I just want to acknowledge all the work that Lorie and her helpers have done here to put all of this together,” said the deputy mayor, also noting that Duff’s visiting mother was on site for three weeks to assist.

The video above shows some of the special ceremonies occurring on the final day of the symposium, including the presentation of a gift to featured guest Barbra Schulte and testimonials by the coaches who attended the event. Zandbergen video, Nation Valley News