CORNWALL — Three recently closed libraries will remain shut down despite public pleas for a resumption of service  — and even threats of South Stormont secession —  during a special meeting of the Stormont, Dundas and Glengarry Library Board this week. 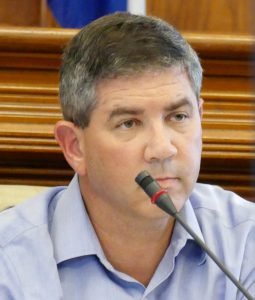 The majority of board members voted Sept. 6 against a motion to rescind the closure of the Morewood, St. Andrews West and Dalkeith branches, sticking with the board’s July 29 decision shuttering those locations effective Sept. 3. Frank Prevost and Jamie MacDonald — who called the special meeting — were the only dissenters that morning.

The SD&G Council Chambers echoed with disbelieving jeers from the audience of about 70 branch supporters after the vote went down. It was also met with a vow from the St. Andrews West delegation — led by resident Cal Martin — to push ahead with lobbying the Township of South Stormont to pull out of the SD&G Library system and set up an independent municipal library board. Martin envisions such a board operating a preserved St. Andrews West library as well as other South Stormont branches in Long Sault and Ingleside, while withdrawing about $500,000 that taxpayers of that township currently send to the United Counties for the SD&G library system. That figure might also include South Stormont’s share of a population-related provincial grant received by the system, although that was not immediately clear.

“We can easily run a fantastic three-branch library system on that money,” Martin told the board, after slamming the process leading up to the  board’s July 29 closure announcement.

He said that South Stormont Council need only pass two bylaws pulling out the system and establishing its own board to make it happen. “And let me tell you, I received an email from the mayor [Jim Bancroft], and he is in full support of the St. Andrews branch,” he added, also noting “majority support” for the branch at township council last time he presented to that body.

“The vote that you are about to have is not a vote on whether or not to reverse the decision to close these three branches. I want to say most seriously that this vote is about the very existence of the SD&G library system because if you continue the unjust process that you have put upon us … I will not stop in my cause to encourage South Stormont … to pull out of the United Counties system,” said Martin, triggering applause from the audience.

Speaking in support of the Dalkeith branch, Leo Lehtiniemi took aim at the statistics used to justify the closures. “It is not good enough to take stats of one month in one year and compare them to the same month the previous year, and then draw conclusions,” he said. “It just doesn’t wash.”

An emotional Brenda Noble urged the board “to not cling to a mistake simply because you spent a lot of time making it.”

“No one told us in May or June that we were still on the chopping block,” Noble complained, adding she learned of the July 29 decision from a reporter.

“Each of your names will be forever linked to this decision, at election time, too,” she said.

Debbie Courneyea brought along fellow resident Morewood Tina Gallo, who testified to the importance of the Morewood branch in her life.

“If the library closes down, I will become a shut-in again,” said Gallo. “I’m very, very emotional about this. There are many of us that are shut-ins, that are wheelchair bound … and the library has opened our world. On top of that, I’ve refound my love of the written page.”

Courneyea cast Morewood as a place on the upswing after recent renovations to the hamlet’s community centre, now.overseen by a recently reformed recreation association. “Our community feels very strongly about keeping the library open. In fact, so strongly, we are offering to provide a cleaning service, snow removal and volunteers to keep the library open.”

“Several members of the Morewood community are here with us today. Unfortunately, many couldn’t join us because it is the first day of school,” she pointed out.

The defeated motion also stipulated the development of library board policies for local council and public consultations and would have compelled the board to include an annual library plan with the its yearly budget submission to the United Counties.

After the vote, MacDonald, who also serves as United Counties warden and North Glengarry deputy mayor, said he was “stunned.”

“I thought there would be a change of heart, and I’m disappointed it didn’t go that way,” said MacDonald. He added that North Glengarry Council would now look at “alternative service delivery” for the Dalkeith branch.

Martin said he found the vote “incredible” in light of his coming push to pull South Stormont out of the SD&G Library system altogether.

But citizen board member Nolan Quinn, a resident of St. Andrews West, explained he supported the closures as a means of addressing the system’s “outdated collections,” a problem indicated in the library’s strategic plan. Quinn added the issue contributes to lower usage rates across the system, with only two to five percent of 6,800 card holders accounting for most traffic.

“Even our active users are using their cards less than comparable library systems,” he said. “The strat plan was the biggest piece of concrete evidence … I must have read it a dozen times. This is not something I took lightly.” He has begun using the Long Sault branch, he added.

Board Chair Bill McGimpsey said he looked forward to working with the three affected communities, suggesting that book dropboxes, programming resources and wifi could still be made available in those places.

“We are just spread too thin,” explained McGimpsey, who noted that comparable library systems have about 15,000 card holders.

“I see it as an opportunity. We only want to make the system better,” he said.

Acknowledging that his critics are “very impassioned,” the chair remarked, “There’s nothing I could say that would go over well with anybody.”

The closures represent the first time a group of SD&G libraries have been taken out of service together in one shot, at least in this century.

Video of the vote appears below.