HAWKESBURY — Embrun’s Jimmy Ivansky is not only a devoted volunteer firefighter at the beck and call of his emergency pager, he is also deeply involved in firefighter’s challenges.

“I’m participating in a dozen contests every year,” explains the 35-year-old Ivansky, adding those competitions are split between Eastern Ontario and those at the national level. 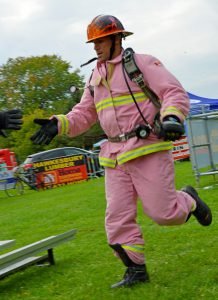 He racked up his most recent win yesterday (Saturday, Sept. 10) at the Eastern Ontario firefighter games finale in Hawkesbury, where the local fire department held its annual “Combat Challenge” — a timed series of physical tests related to the firefighting pursuit.

It is easy to spot Ivansky in a competition:  He always wears a pink bunker suit (firefighter’s protective gear). “All the money that I raise goes in a fund to help fighting breast cancer, a cause that I care for,” he explains of his fashion choice.

In Hawkesbury, he finished first overall with an individual time of 1.15 minutes, an 18-second lead on his closest rival.

He heads next to Calgary, Alta., to compete in next weekend’s “FireFit Championships.”