Teens and youngsters with the local after-school program helped plant the community garden in Mountain this past spring. And on Aug. 31, they and their coordinators and other volunteers took over The Gathering House kitchen in Chesterville, transforming 10 crates of tomatoes harvested from the garden into small jars of salsa and preserves — bound for the House of Lazarus food bank as a “Gardening for Groceries” effort. 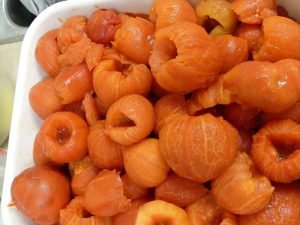 Loads of fresh selantra, peppers and string beans also went into the recipe that day.

Processing the garden’s bounty into product for food bank clients was just the latest milestone for the community garden, which got started with the help of a  $7,000 grant and employed two summer students this year, according to HOL’s Gardening for Groceries coordinator. The initiative also hosted six gardening and soil workshops to encourage and educate local residents to supplement their food requirements by growing healthy vegetables themselves.

Some of the harvest processed that day. Zandbergen photo, Nation Valley News

For the youth on hand, the day complemented what they learn during their GIAG Dundas after-school program.Coordinator Kaitlin Herfkens explained that making supper together is part of their routine during the school year. In Chesterville, participating children ages 9 to 17 meet on Thursdays at St. Mary’s school, starting at 3:30 p.m., moving to The Gathering House an hour later. The program resumes its Chesterville dates for the 2016-17 school year on Sept. 22, Herfkens said. GIAG also operates after-school Dundas Youth Group sites in Morrisburg and Winchester earlier in the week. See www.giag.ca.