SOUTH MOUNTAIN — They trundled over the fairways and greens of Sandy Row Golf Course, and in the end, the firefighters of Chesterville and their North Dundas friends raised several thousand dollars for prostate cancer.

Organized by the Chesterville station’s Brandon DeJong and Mike Gore as an internal replacement for the now-defunct Flash a ‘Stache prostate cancer campaign, the tourney drew over 50 players. Thirty-eight sponsors also contributed to the event, which included a silent auction and putting contest.

The tournament also saw the station’s special fire-prevention awareness cart put to use on an actual golf course for the first time since the station came into possession of the machine. Tom Henderson donated the golf cart to the Chesterville station last year. It has since been transformed into a fire-engine red unit complete with flashing red and white lights on top. 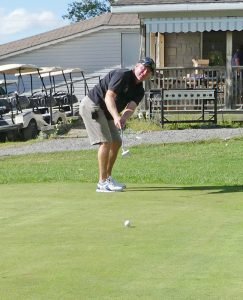