CHESTERVILLE — A flurry of fundraising success has ensured no fewer than 16 iron snowflakes will adorn Chesterville hydro poles in time for the Rotary Club’s regular early December Breakfast with Santa event.

Club member Betty Vanden Bosch recently reported that collection efforts to date have yielded $17,383 — including just over $3,000 contributed by the club itself. That amount will cover 16 of the large snowflakes,  four stars that will go by the village’s four churches in the village, plus  a planned “Merry Christmas”  display set to be attached to the Community Centre wall. 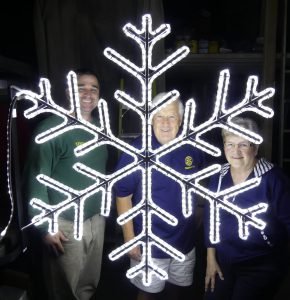 Industrial Stainless co-owner Kent Young (left) poses with the prototype snowflake — 10 of which are set to go up in Chesterville in time for this Christmas — along with Chesterville Rotary Club President Joe Cass and member Betty Vanden Bosch. Zandbergen photo, Nation Valley News

Kent Young of Industrial Stainless has been commissioned to produce the units in his Chesterville shop, while electrician John Thompson has also agreed to assist with installation of the new Christmas decorations on local hydro poles — fanning out from the village centre — recently mapped out by Vanden Bosch and her husband, Stan.

The new Christmas decorations and lights are set to replace old worn-out pieces dating back to the late 1970’s. The township will accommodate the new snowflakes by ensuring power outlets are installed on the poles as needed. A code issue caused the original outlets to be cut off when the village was upgraded to LED street lamps a couple of years ago. As a result, the previous threadbare decorations not only looked bad but were also left dark for one recent Christmas season. 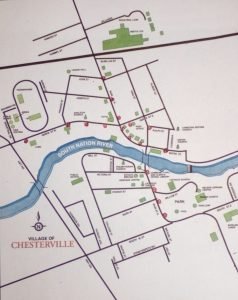 This map shows many of the proposed new decorative snowflake hydro pole locations in Chesterville, along with four stars that will go by the village’s churches.