Verifying the core idea put forward in great detail Sept. 28 by Cal Martin of St. Andrews West, Bancroft explained that if local council voted to quash the bylaw underpinning the township’s participation in the SD&G Library system, the United Counties government would be compelled to exempt South Stormont properties from a small percentage of the upper-tier tax levy now earmarked for that system. 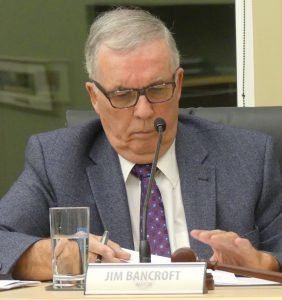 In a revenue swap, South Stormont could then conceivably raise its own tax rate to collect that money itself and — with those resources — take over operations of the library branches in Ingleside and  Long Sault, and revive the St. Andrews West branch closed by the SD&G Library board last month.

There is precedent in having a local municipality operate its own independent library system this way, as the Village of Iroquois did so prior to its amalgamation into South Dundas in 1998.

In his PowerPoint presentation earlier that evening, Martin methodically made the case that South Stormont residents have been poorly served for the sum they contribute to the SD&G Library system. “The amount of service we’re getting back is unacceptable,” said Martin, who has led the charge in St. Andrews West against the closure of that branch. “Our three branches cost less than $150,000 to operate,” he asserted. “Clearly, we’re not getting our money’s worth.”

No entity was better placed to provide library service to South Stormont residents than the township itself, he argued, also pointing out that an independent township library system would have access to SD&G’s book collection through the established inter-library loan program.

He also suggested the SD&G Library Board may impose cuts in the hours of operation at Long Sault — although Deputy Mayor Tammy Hart contested that allegation.

The SD&G Library Board’s treatment of South Stormont is “very much like an abusive relationship,” Martin alleged. “Nothing in their pattern of behaviour indicates that anything will change.”

Leaving the relationship “is not really that scary,” he added.

Bancroft said that township staff have been tasked with examining Martin’s idea further. Those officials are due to report at the next council meeting.

In a controversial move, the SD&G Library Board closed the St. Andrews West, Morewood and Dalkeith branches on Sept. 3.