After the ceremony unveiling the British Home Child Lane sign in South Dundas, those in attendance posed with the new marker off County Rd. 2. Zandbergen photo, Nation Valley News 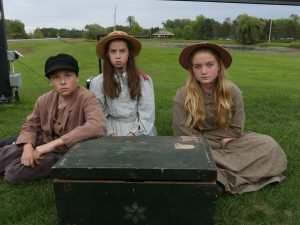 From left, William O’Shea, 12, Eleanor O’Shea, 10 and Mia Grant, 12, all of Cornwall, are the great grandchildren of the late Edwin Matthew Baker, a British Home Child who arrived in Canada in the early 1900s. Dressed as home children from the period, the trio pose with the original trunk that accompanied Baker on his trans-Atlantic journey at the age of 14. Zandbergen photo, Nation Valley News

But now Brownell’s federal counterpart, MP Guy Lauzon, is pushing to have the day recognized nationally. During ceremonies marking the new name of the laneway leading into Crysler Park Marina, Lauzon revealed the effort to enshrine the day for all of Canada, through the federal parliament. Brownell’s sister, Judy Neville of Finch, acknowledged that she’s recently begun working with the MP on the national initiative that is already drawing supporters from other parts of the country.

The installation of the sign at the County Rd. 2 entrance to the St. Lawrence Parks Commission facility came about as an alternative to the renaming of County Rd. 12 — an idea brought forward by another British Home Child descendant, Carol Goddard, which was rejected by SD&G Counties Council earlier this year. Counties engineer Ben de Haan’s department instead supplied the new sign for the laneway that leads into the marina and nearby Aultsville train station. The old station has served as a British Home Child museum for a number of years.

Also on hand for the occasion were local MPP Jim McDonell and his Brockville-area counterpart MPP Steve Clark — a co-sponsor of Brownell’s bill at Queen’s Park — along with representatives from the Commission, the Ontario East British Home Child Family, and the mayors of both South Stormont and South Dundas.

It’s believed to be the only road or lane in Canada named in honour of the British Home Child phenomenon — “which I’m very, very proud of,” said Ontario East British Home Child Family President Gord Reoch. British Home Children were impoverished or orphaned children from England, Ireland, Wales and Scotland sent to this country, often to serve as indentured farm and house labour.  Ranging from three to 18 years of age, an estimated 130,000 or more children arrived here between 1869 and the 1940s. Some of these young immigrants never spoke of their origins later in life, not even to family members and descendants, because of the ostracism they suffered.

See the sign-unveiling ceremony in the video below, emceed by Judy Neville.