CHESTERVILLE — A crew working for Trans-Northern Pipelines completed their upgrade of a fuel pipeline valve off Forward Rd. this week — an installation that’s much more obvious than the previous box-type valve that was largely buried and otherwise invisible once the surrounding corn crop reached mature height.

The understated old unit is now gone and replaced by a much larger, industrial-looking emplacement enclosed by a chainlink fence topped with barbed wire. The reel-type valve sits well above the ground, connected at either end to the pipeline now dramatically emerging from the ground.

A worker on site said the pipeline carries “distilled product” — fuels ranging from gasoline to kerosene. Not to be confused with TransCanada and its controversial Energy East proposal, this particular pipeline is owned by Trans-Northern Pipelines. According to the Canadian Energy Pipeline Association’s  interactive About Pipelines Map, the line carries refined petroleum products between Montreal and Ottawa. An image from the online map appears below. The lower information balloon (intentionally selected near the Chesterville work site) describes basic information about the pipeline. The upper information balloon accompanies a dot denoting a previous “liquid release” site — in this case the release of gasoline at a location north of Winchester in 2009. 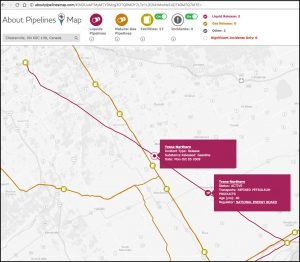 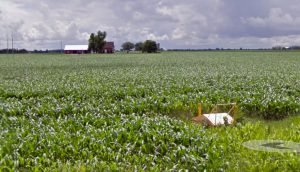 The old valve on Trans-Northern’s pipeline off Forward Rd., as photographed by Google Maps in 2009. 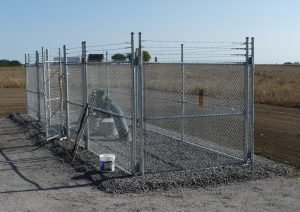 The new valve, photographed from the same angle by Nation Valley News this week.