As a result of the move, approximately half of the entire South Nation River watershed now appears to fall into Level 3 status, based on mapping supplied by SNC earlier in the summer.

The Castor River subwatershed in the western part of SNC’s jurisdiction is the third area to be identified at Level 3,  joining  the Bearbrook and Spencerville-area subwatersheds in a state of “severe drought.”

Despite recent rainfalls, streamflows in these areas remain below 30 percent of normal, says the local watershed authority.

The remainder of the jurisdiction continues to be in a moderate (Level 2) drought condition as originally issued on July 8, with less than 50 percent of normal summer monthly flows.

SNC says a significant amount of rainfall across the watershed is needed to return conditions to normal. Environment Canada forecasts above-normal temperatures and normal precipitation for Eastern Ontario from October to December

Residents, businesses and other industries throughout the jurisdiction are encouraged to limit non-essential water uses like lawn-watering and car-washing, with the aim of reducing consumption by 50 percent.

SNC asks that any unusual water-related problems or dry wells be reported to them at 1-877-984-2948 or waterwatch@nation.on.ca. They also welcome photos via Facebook and Twitter. 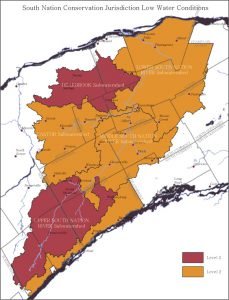 South Nation Conservation issued this map in July showing Level 3 drought conditions applying in two areas. As of this week, the Castor sub-watershed (still shown in orange on this map, between the Upper South Nation and Bearbrook subwatersheds) is now at a Level 3.