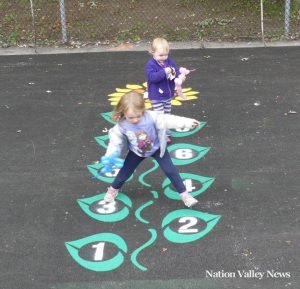 BRINSTON — The winds of recreational revival are blowing at Matilda Memorial Park and the area beyond.

The hamlet’s old ball park was falling apart in recent years. South Dundas even cannibalized the place for its field lights, furthering the decline of the place named after the former Township of Matilda (which in turn drew its name from a lesser known member of the royal family).

Credit the South Branch wind project for spooling up renewed public interest in the facility. Developer EDP Renewables provides funding for recreational improvements limited to the Brinston, Dixons Corners and Dundela area each year. But the Brinston site had become so neglected and underused, there was nobody to apply on the park’s behalf. “It was sad,” says Cindy Peters during a recent community barbecue that drew hundreds of people and helped generate additional funds.

A member of the public committee that considers applications to the EDP fund, Peters had been active on the defunct Matilda Recreation Assocation that spearheaded an overhaul of the park two decades ago.

So in April, the Brinston resident kick-started the creation of a new Recreation Association group to advocate for the park and annually apply to the South Branch Community Fund Committee. Township council and the committee approved the group’s 2016 application for $34,000. The newly constituted Association proudly showed off the newly asphalted tennis courts — complete with specially painted hopscotch designs — at the Oct. 1 pig roast event. New rink boards will also go up to surround the surface this winter. Township employees carried out some of the improvements, so it’s not clear yet how much of the $34,000 has been drawn down, according to Peters.

Volunteers also contributed a lot of labour this summer, she says, from clearing weeds out of the overgrown interlocking walkways, to fixing the ball diamond and cleaning the canteen. She envisions further windmill funding applications for kitchen supplies, rink hoses, new and accessible play equipment, soccer goalposts, basket nets, masonry barbecues, benches, a gazebo, and trees. Also on the agenda is outdoor exercise equipment.

The new Association plans to be active beyond Matilda Memorial Park: They’re going to resurrect the the Matilda Winter Carnival at the Matilda Hall again this winter. That event hasn’t been held in years.

See the photo gallery from the Oct. 1 event at Matilda Memorial Park below.