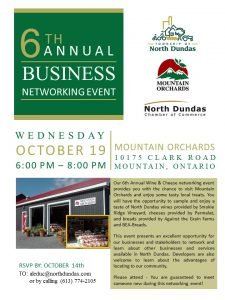 Co-sponsored by the North Dundas Chamber of Commerce, the upcoming schmoozer runs 6 to 8 p.m. at Mountain Orchards on Wednesday, Oct. 19.

Changing locations each year, the wine-and-cheese is a tradition spearheaded by the township’s first economic development officer, Rob Hunter — now with South Dundas — and carried forward by the second person to have the position in North Dundas, Anne Leduc.

Located at 10175 Clark Rd., Mountain Orchards is owned by Shelley and Phil Lyall, who bought the place in the early 1970s as back-to-the-lander baby boomers.

The place teemed with visitors during a visit to the operation by Nation Valley News on a Saturday earlier this month — although staff members and Shelley Lyall herself said that turnout was light compared to the previous weekend: An estimated 16,000 people descended on the place Sept. 24-25. When asked if the agri-tourism business was on track to serve 50,000 to 60,000 people this season, Lyall reluctantly indicated that might be a good guess.

She said the going was tough for their first 35 years of ownership. It got so tough in the mid-1980s, when they experienced a total crop failure, her husband and a friend went to work in construction that year. They spotted an opportunity to supply quality wood trim to the local marketplace, which spawned the creation of another successful business, Mountain Moulding Ltd.

As for the orchard, the Lyalls got out of standard commercial production several years ago, Shelley says, choosing to focus entirely on pick-your-own. Visitors had picked clean their popular Honeycrisp and McIntosh trees by Oct. 1, but there was still a good crop of Honeygold and Empire apples to choose from at that time. Pre-picked apples remain available in their store for the next couple of weeks with only windfalls still out in the orchard, according to the company Facebook page.

Check out the gallery below of orchard activities photographed Oct. 1.