A South Nation Conservation crew member drives a boat back toward the Chesterville waterfront before towing out another part of the floating dock system for the season. The annual dock removal happened on the same day that South Nation Conservation's Water Response Team decided to maintain the Level 1 drought status in half of the watershed. Lascelle photo, Nation Valley News 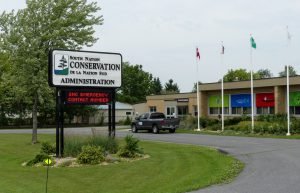 The team concluded Oct. 12 that the western part of its jurisdiction remains in a “Level 3”  drought — specifically affecting the Bearbrook, Upper South Nation River (Spencerville) and Castor River subwatersheds. As of last week, streamflows in those areas remained at less than 30 per cent of normal flows.

While the watershed has experienced similar droughts in the past, 2016 is the first year South Nation Conservation possessed sole authority to declare a severe or Level 3 drought, thanks to a change in provincial law last year, says SNC Water Resources Analyst Golam Sharif. Consequently, SNC has chosen to exercise that power at the current threshold. “It’s the first time [for a Level 3] because now we have the authority,” said Sharif.

In previous droughts, a Level 3 declaration could have only come from Ontario’s Ministry of Natural Resources, he explained. The local decision to escalate to Level 3 makes SNC “unique in Eastern Ontario,” he said.

And what if things get worse? There is no available Level 4 drought status. The only available next step is a declaration of a state of emergency by affected municipalities, according to Sharif.

The eastern half of the watershed remains in a moderate (Level 2) drought condition as originally issued on July 8 with less than 50 per cent of normal summer flows.

So how dry is that? Water has not flowed over the stop logs at the Chesterville Dam since July, an SNC employee reported in Chesterville last week, while taking out the village’s waterfront docks for the season.

Those docks must be retrieved before crews gradually lower water levels in the Chesterville headpond to winter levels — a two-week process that always begins after Thanksgiving weekend.

Residents, businesses and other industries throughout the jurisdiction are encouraged to reduce their water consumption by 50 per cent by limiting non-essential uses like lawn watering and car washing.