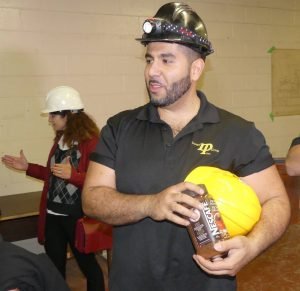 Hamed Asl, co-owner of the former Nestlé plant in Chesterville, cradles a bottle of Nescafe — part of a small stash of old product discovered at the property. Nestlé made instant coffee at the plant for decades until the Swiss multi-national shut it down in 2006. Zandbergen photo, Nation Valley News

Assembly of the massive truss system and ceiling was carried out by Structurecraft Builders and subcontractor PCL Construction who temporarily occupied the factory rail-siding area for much of the summer.

IDP Group co-owner Hamed Asl revealed the NAC connection during an Oct. 21 event at the 171 Main Street address celebrating the firm’s official relocation from Ottawa and receipt of a $70,000 grant through the Eastern Ontario Development Program.

IDP bought the then-moribund 373,000-square-foot factory building and surrounding 40-acre site for $750,000 last November. While in the middle of bringing the shuttered factory up to condition, the firm landed the NAC contractors currently involved in the rejuvenation of the downtown Ottawa Centre in advance of Canada’s 150th anniversary next year. 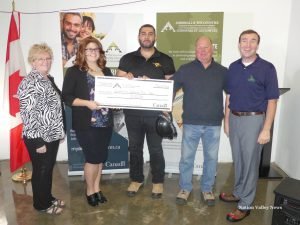 For Asl, it was early proof of momentum and market demand for competitively priced warehouse space in the region, which IDP plans to lease out at one third of the going price in Ottawa, located only 40 minutes away.

“They brought all their trades down here from National Arts Centre, made the entire roof down here in modular sections,” reported Asl. “They changed a lot of the project to make it happen, but it worked for them, and it worked for us,” added the entrepreneur.

Landing the NAC contractor was a challenge — necessitating the installation of a giant door — while IDP was in the middle of its own ongoing $650,000 overhaul of the Chesterville plant. “We had to change from doing our space to getting their space up and running, and that just shows you the interest is there.”

Getting other parties to sign on the dotted line “is just a matter of time, and a matter of making it happen,” said Asl, who confidently predicted the firm will find takers for 150,000 square feet of available warehouse space once “first phase” renovations at the plant wrap up in about two months. He estimated that 50 to 60 companies have toured the facility to look at leasing opportunities so far.

“It’s going to take a while before they make a commitment to move there. But that’s going to happen,” he said, emphasizing he sees IDP, the township, and the people of Chesterville as being in a partnership of sorts, to show potential lessees that they and their potential jobs are desired here. “Show a company that’s going to hire 100 people that we’re positive and we want it. It’s not just us [at IDP],” he said.

The businessman also highlighted his own commitment to the project by pointing out that he moved to Chesterville for six months while the site was restored “from the brink of disaster to ‘normal.’”

Recent improvements have included the restoration of electrical service and a sophisticated security system — the owner raved repeatedly about the assistance of electrician John Thompson — replacement of about 900 feet of interior roof drain pipes, testing of the fire suppression system, and thousands of hours of pressure washing the interior of the cavernous structure.

IDP’s own office and common area are located in what was the old lab and office area for the coffee tower — now renovated into a gleaming place of polished concrete, glass doors, and painted industrial ceilings high overhead. Long gone are dowdy suspended ceilings and plastic floor tiles that began to lift as the building was left unheated for several winters following Nestlé’s 2006 pullout and subsequent sale to another property-holding entity.

Heat has been restored with propane salamanders, and the firm still plans to install a series of small boilers to make use of existing radiators, according to Asl.

Alluding to an agreement between IDP and the township for long-term repayment of a property tax bill left behind by the previous owner, North Dundas Mayor Eric Duncan said the township was struck by IDP’s pragmatic approach and plan to revive the space. “That built confidence for us, and it’s working so far, and it’s going in the right direction, so I mean, that speaks for itself and the credibility of IDP,” said Duncan.

Lynn Ferron, Vice President|Practice Leader at the Ottawa office of international architectural firm HOK, spoke up to vouch for IDP as a business. She praised the furnishing job Asl and company did on a recent HOK project in Ottawa — the 34-story Canada Revenue Agency building. “So I completely trust IDP, and I think you should be very comfortable with Hamed and company,” said Ferron, directing her comments to locals on scene. Because when they go in, they go all in,” said Ferron, whose firm conducted a necessary architectural study of the factory.

“They showed up here when it was in pretty bad shape, provided a lot of support, a lot of insight, a lot of confidence in what they do,” said Asl of HOK, repaying the compliment. IDP was stuck reassembling plans and specs for the factory building from scratch because the previous owner had left the place “like a bad marriage.”

Chesterville residents Sara and John Meharg are five per cent partners in the factory endeavour. They have leased the plant’s old cafeteria area with plans on turning it into a co-working space, Dr. Sara Meharg, an adjunct professor at the Royal Military College, confirmed for Nation Valley News at the Oct. 21 event.

IDP’s $70,000 grant cheque came via the Counties and Cornwall Community Futures Development Corporation. The funds will help with the firm’s relocation and retrofitting activities in Chesterville.

In addition to warehousing activities, the factory has hosted a number of movie and commercial film shoots, thanks Mike Doiron of Chesterville, operator of Ottawa Industrial Film Locations. Doiron works for IDP at the factory site when not arranging for the cameras to work their magic.

See the gallery below for photos at the event.

See the video below of the ceremonies and a bit of the plant tour.