The annual 'Art in the Dark' event with be hosted once again at Russell High School. Zandbergen photo, Nation Valley News

STORMONT-DUNDAS — Disillusionment is settling in for some parents who have volunteered to serve as representatives on this area’s so-called pupil ‘Accommodation Review Committee’ (ARC) — following an Oct. 20 orientation session with Upper Canada District School Board officials.

‘ARC 2’ is the Kafkaesque term for the committee that will conduct upcoming public meetings to gather input on the board’s controversial plan to consolidate and close several schools within the Stormont, Dundas and Glengarry region. (Three additional numbered ARCs are conducting a similar exercise in surrounding regions as the board looks at closing up to 16 Eastern Ontario schools at the end of this school year — plus 13 beyond that.)

Not surprisingly, the local ARC — chaired by Superintendent Tim Mills — has drawn the involvement of parents staunchly opposed to the closure of their respective schools. That includes Kirsten Gardner, a representative for Morrisburg Public School, whose students are slated to end up in Iroquois, under the UCDSB’s current proposal.

Gardner described the evening session at Tagwi Secondary School — attended by about 100 people, including principals and other board observers —  as “a total set-up.”

She said that board staff appeared unprepared for the detailed questions posed by the parent reps and seemed “shocked” by the situation. “It’s like they expected a bunch of local yokels,” she said.

Repeating what she posted on the Save our Seaway Facebook group, Gardner said the director of education couldn’t tell her the relative value or weight each of the considered criteria would receive in the board’s final decision — the report the ARC must produce this winter, the board’s recently initiated public survey, or alternative options. “For me this is a strong indicator that there is intent to manipulate the submissions towards the UCDSB’s favoured outcome,” she alleged on Facebook.

Gardner told Nation Valley News she was “absolutely disillusioned and utterly disgusted. I think it was extremely disrespectful that they were not prepared to answer questions that night.”

“It just feels like they’re going through the motions,” she added.

Neither was Gardner impressed, she said, when the meeting began with the presentation of mileage collection forms to the participants. “I don’t know how they can justify paying mileage.”

In another Facebook post on the Seaway page, ‎Sandra Lukawitski-Cummins‎ similarly expressed her chagrin at the Oct. 20 meeting, which she reported attending as one of the ARC’s alternate members.  “The ARC’s job is to produce a report by Feb 6/17 which will be presented to UCDSB on Feb. 25/17. At the very end of the meeting when fellow ARC members expressed frustration that they still didn’t understand their role, I asked what the report was supposed to contain, ‘Are there guidelines for content of the report we are to submit?’ The answer was, ‘No’.”

Lukawtiski-Cummins also said they were denied access to an earlier budgetary study that played a role in the development of the Sept. 28 report that called for school closures. “The UCDSB hired a company to do a study and submit the budgetary figures used in the Pupil Accommodation Review (PAR) report,” she wrote. “When asked if we could have access to that companies report the answer was, ‘No’.”

The Oct. 20 let-down followed a build-up of earnest activity in advance of the ARC orientation session. 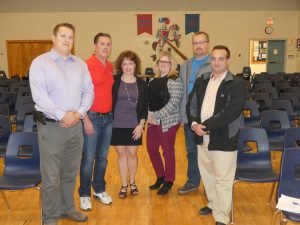 From left, presiding over an Oct. 17 Ingleside meeting to strategize on the future of R-O and Longue Sault Public School, from left, Dale Rudderham, Paul MacIsaac, Jennifer MacIsaac, Teri-Lynn Beckstead, Troy Froats and Kent McDougall. Rudderham is the parent representative for Long Sault Public School to the Accommodation Review Committee, while McDougall is the alternate. The rest are among the handful of ARC representatives allocated to R-O. Zandbergen photo, Nation Valley News

At R-O on Oct. 17, advocates for that school highlighted several mistakes in the Sept. 28 staff report that kicked off the review process.

In front of an audience of 150 people, Dale Rudderham, one of the representatives for Longue Sault Public School, delivered an extensive overview of the board plan and critique of identified errors in the report, during the R-O powwow.

But Gardner reported that those errors were dismissed when brought to the attention of officials at the Tagwi orientation session later in the week. “They told us point blank that the report is the report.”

According to information presented by the R-O group, the UCDSB is in pursuit of money from the province to build new and expanded schools — especially a new Cornwall high school to replace aging CCVS.  But the board won’t get cash for new construction unless it eliminates excess school space resulting from declining enrolment across the board.

Meanwhile, parents lobbying to save Seaway District High School have a rally planned on Friday, Nov. 4, at the school track, starting at 5:30 p.m. Organizers encourage participants to make and carry signs, and to email joytulip@hotmail.com with letters explaining how Seaway’s closure will affect their community. 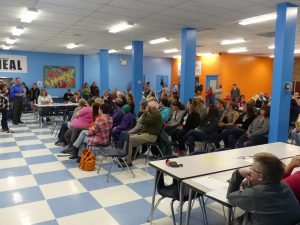