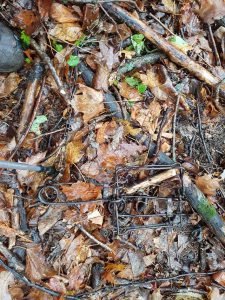 Buddy’s owner, Bruce Kennedy, squeezed the mechanisms on this conibear trap for 25 minutes to prevent the full force of the device from choking his dog to death. Courtesy photo 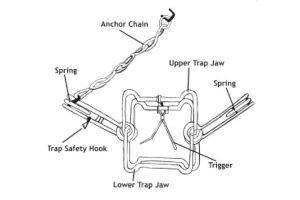 SOUTH GLENGARRY — A family dog just about met its demise in the jaws of a powerful conibear trap left on a public trail just outside the boundary of the City of Cornwall.

In a harrowing Oct. 23 Facebook post, Bruce Kennedy describes the rescue of his “shrieking” Australian Shepherd, Buddy, after the spring-loaded trap snapped down on the canine’s head while out on the Peanut Line Recreation Trail.

“He ran up the embankment about 10 feet off the main trail, but still on the recreation trail property. We heard the most nightmarish shrieking possible from him, and when we reached him, saw that he had a Conibear trap closed over his head, choking him to death,” Kennedy reported in the post that has reached over 2,600 people so far.

“The trap has two arms to release the incredible pressure of the spring mechanism. I could get one of the arms released after about three minutes of Buddy being choked, but did not have the strength to get the second one released. After help arrived … a neighbour was able to help me release and lock open the second arm. We then could get the trap off Buddy’s head. This took about 25 minutes from the time Buddy was trapped to the help arriving, when I was alone with him and squeezing the opening arm as hard as I could. I was terrified that I would lose my grip or strength and have to watch him choke to death.”

The animal survived, was checked out by a vet and “will make a full recovery,” the owner reported.

The Peanut Line Recreation Trail runs on Township of South Glengarry property, traversing the municipality from the outskirts of Cornwall to near the Quebec border.

Kennedy’s report on social media prompted the Township of South Glengarry to issue its own website warning about the trap’s discovery on the trail, confirmed Ewen MacGeneral, the township’s Manager of Infrastructure Services. MacDonald says that trapping is not permitted on the popular multi-purpose trail.

He says he did speak with Kennedy, who informed him that Ontario’s Ministry of Natural Resources has been out to investigate the site just beyond the Cornwall boundary, north of Highway 401.

MacDonald says this type of trap is sometimes used to catch and kill fishers.

Kennedy told Nation Valley News today (Oct. 26)  that the palms of his hands still hurt after squeezing the trap’s two mechanisms for 25 minutes to prevent the full force of the device from completely choking Buddy while they waited for help.

“I thought I lost him twice when his eyes began to flutter. I then found more strength to squeeze harder and longer,” he said via Facebook messenger. “I kept talking to him to help ensure he breathed.”

His partner, Rosalind, had run half a kilometre to fetch a neighbour and teenaged son who returned to assist the couple release buddy. They also called 911. Officers arrived and took a report after the animal was loose.

Kennedy says that Buddy wasn’t cut in the incident, but now has a sensitive throat area, so they’ve switched to a $30 harness instead of a collar for the time being. He says they also incurred a $350 vet bill. Though “stunned,” the dog bounced back to his normal self and was eating treats about 20 minutes after he was freed.

He says the investigating MNR officer told him he’s investigated two similar incidents in the past, with the entrapped dogs dying in both of those cases. Kennedy also says that about eight dog owners have since contacted him to tell of how their pets perished in conibear traps. That includes Valerie Strain, whose dog ‘George’ died in front of her children on a Peterborough trail last year. Strain has launched a campaign petitioning the province to establish setback limits for traps from public trails and roads.

South Glengarry Township has since scouted the Peanut Line for additional traps, according to Kennedy, who pointed out that it’s akin to finding a needle in a haystack.

Noting that he’s no stranger to rural life or the area, the independent healthcare consultant lives on the ancestral Williamstown-area farm where he grew up. The trail in question bisects the farm that has been in his family for 195 years. “I have been roaming the Peanut Line … since I was a kid. I have been walking dogs on that trail for the past 13 years.”

And while he does have a photo of Buddy ensnared in the trap, he won’t share the image “because it would upset people.”

See the instructional video below on how to free a dog from a conibear trap, a process described as “almost impossible” with bare hands: