FINCH — Developers behind the proposed Nation Rise Wind Farm in North Stormont are hosting a public meeting this evening (Oct. 25), 4 to 8 p.m. at the Finch Arena.

The session follows the September release of the draft project description report, one of the paperwork milestones on the way to an anticipated 2019 project groundbreaking by EDP Renewables Canada Ltd.

Nation Rise Wind Farm will generate 100 megawatts of power, when operating at full capacity, from 30 to 50 proposed turbines erected over a 22,000-acre spread in North Stormont.

The project has not been stymied by the Ontario government’s late-September reversal of plans to sign another $3.8-billion in renewable energy projects. 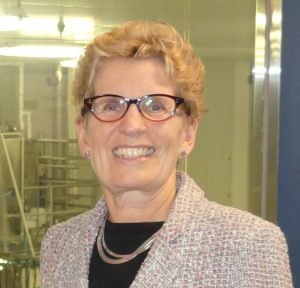 “There are contracts that are still part of the first round of sitings,” the premier explained during an Oct. 13 visit to St-Albert. “Some of those go forward, and some of them don’t, depending on all of the approvals and so on. I can’t interrupt that process. Those are processes underway.”

“But … we’ve actually suspended the next large renewable procurement because we’re looking at the long-term energy plan and we’re determining whether we need more capacity,” she said. “But interestingly,” the premier added, companies like St-Albert Cheese “are actually looking for more power.”

“There are businesses in this province that need more power, and we need to keep investing in capacity. So that’s why our long-term energy plan is important and we’ll continue to work with businesses and municipalities.”

Asked if, in the end, cheap power is what the people of Ontario actually desire, Wynne replied: “They want reliable power. And of course, we know there are costs associated with that infrastructure.”

She asserted, “So that’s why we’re taking costs out of the system” and noted, among other things, the recent removal of the provincial portion of HST from hydro bills.