BERWICK — North Stormont Township has a new fire chief, promoting a volunteer firefighter from within to take up the post vacated by Joe Bakker, who retired three months ago.

The new chief, Dan Gauvin, also happens to be a professional firefighter of 13 years with the City of Ottawa — when not adding to his 16 years of service with North Stormont’s Avonmore station.

Gauvin was announced as the new North Stormont chief at the Oct. 25 council meeting.

The ‘double-hatter’ said he brings professional experience to the paid part-time North Stormont position, but acknowledges “whether you’re a volunteer or a professional, it’s the same job.”

At the Ottawa department, he’s based out of a Montreal Rd. firehouse, holding certifications as both a ladder truck technician and water rescue technician.

He previously served as district chief for the Avonmore station and was station captain before that.

For 2017, he looks forward to the North Stormont department’s upcoming tanker shuttle accreditation process, completing the move of dispatch service from Hawkesbury to Cornwall, and ongoing promotion of fire prevention awareness. 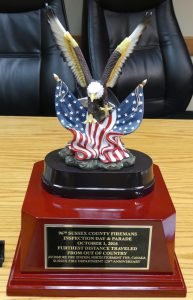 In one of his first official duties as township fire chief, Gauvin and several North Stormont firefighters presented council with a special trophy awarded to the Avonmore station by the Sussex, New Jersey, fire department. A contingent from the township station participated in their American comrade’s recent annual march, winning the furthest distance travelled out-of-country award in the process. Sussex Chief Jake Little presented the trophy to his Canadian visitors on Oct. 1 .

“Firefighters broke their salute to come out and shake our hand,” recounted Garnett Last, one of those who made the trip to the 96th annual Sussex County Firemen’s Inspection Day and Parade in the Garden State.

Gauvin explained that Avonmore forged a connection with the New Jersey firefighters when the North Stormont station bought a truck from the Sussex department nine years ago. The local members have also attended the Sussex department’s annual March shave-a-thon fundraiser for the St. Baldrick’s Foundation, an organization dedicated to fighting childhood cancers.