EDP Renewables proposes to break ground in 2019 on a multi-million-dollar 100-megawatt wind project involving as many as 40 turbine towers in North Stormont. The precise location of each turbine was not revealed at the Oct. 25 session that featured display panels arranged around the room. Friendly company officials discussed the project with individuals and small groups browsing the information contained in the September “draft project description report” produced by consultant DNV-GL. It was the same informal meet-and-greet-over-easels format employed by the developer in its previous Finch appearance, last August. There was no town-hall-style presentation or fielding of questions posed by an audience.

Nation Rise Wind Farm survived the Wynne government’s recent halt on the awarding of new Green Energy Act contracts; the project predates the new round kiboshed by the governing Liberals.

“I feel like tonight was a waste of time. It was a just a checkmark on the government application,” offered John Irven, member of the Concerned Citizens of North Stormont group that opposes the project.

Working in conjunction with Wind Concerns Ontario (WCO), the group says the Independent Electricity System Operator will pay the developer just shy of 9 cents per kW/h for power produced by Nation Rise Wind Farm. In a recent letter to the editor, WCO President Jane Wilson calculated the amount at $430 million over a 20-year term. She contrasted that figure with the $600,000 she said the firm would collect if the government pulled the plug now, under the contract’s cancellation clause. 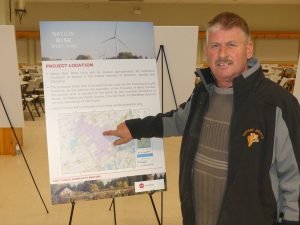 Not me! Theo Elshof points to the location of his dairy farm inside the Nation Rise Wind Farm’s study area. While his property falls inside the coloured area, he wants it known that he has not signed a contract with the project developer. Zandbergen photo, Nation Valley News

(North Stormont Council turned down annual payment of $330,000 to the township when it voted to deny the brownie points sought by the developer, confirmed Chief Administrative Officer Marc Chenier last week.)

Angelique Magee of Crysler said she was disappointed at the information received that evening, explaining she had hoped to see acknowledgement of the concerns she brought forward at the 2015 session.  “We came last year, and none of my questions were documented, and so the process doesn’t seem very transparent.”

A Geological Survey of Canada scientist, Magee — who was careful to note that she spoke exclusively for herself, not her employer — reported how she and her husband bought their place outside Crysler last year without knowing of the proposed wind project. “A week later, we received notice of a public meeting.” They worry about a decline in property values and ending up saddled with a mortgage exceeding the worth of their home.

“I know how the process should work,” added Magee, gazing at the display panels across the room. “And I don’t see a difference in the information from last year.”

Peering at the vast North Stormont study area indicated on one of the displayed maps, dairy farmer Theo Elshof voiced his displeasure. His family farm fell inside the coloured area, yet he had specifically declined to sign a lease with the developer. Elshof suggested the map gave the incorrect impression that he was involved. “I’d like to see a map of who signed up,” he said, adding he had refused to do so despite being approached multiple times. “They must have been over 15 or 20 times to see us,” he reported, adding he had even refused permission to bury power lines across his property.

“My neighbour signed up because he thought I signed up,” said Elshof, suggesting he had also been told he might as well sign because turbines were going up in his neighbourhood anyway. “After he found out I didn’t sign, he tried to get out of it.”

Elshof reported the developer was offering to “option” land for about $10 per acre, and about $20,000 per year for each installed turbine. “I don’t want to do it for the money,” he said, explaining his opposition was based on the rising cost of electricity in Ontario. “The hydro rates get more and more expensive.”

Farmers had been wooed with a banquet in Winchester and a cruise excursion to Bolt Island in the Thousand Islands, he also said.

EDPR previously built the 30-megawatt South Branch Wind Farm in South Dundas, in the Brinston area. The involved municipalities received $2.7-million as compensation for road “damage” incurred during construction. South Dundas also receives $30,000 annually for community recreation in the Brinston area, as a result of that project.

Preliminary studies and attempts to sign up farmers for the Nation Rise effort have been underway since 2012.

The planned turbines in North Stormont will stand 140 metres tall to the centre hub — 40 meters higher than those in Brinston.

This article was updated to reflect the correct date of the Finch info session — Oct. 25. 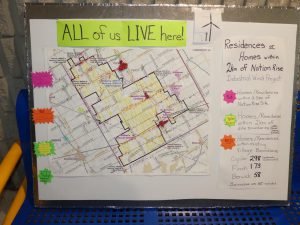 Nation Rise Wind Farm critic Margaret Benke assembled this map showing all the residents within the “study area” of the 100-megawatt project that will involve the installation of up to 40 turbines, starting in 2019. Zandbergen photo, Nation Valley News 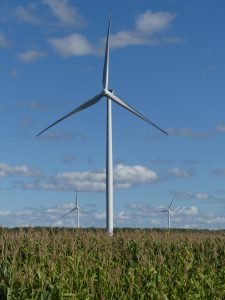 One of 10 turbines — standing 100 meters tall at the hub — built by EDPR in the Brinston area. The North Stormont turbines would be 40 metres higher. See video of the units in action below. Zandbergen photo, Nation Valley News