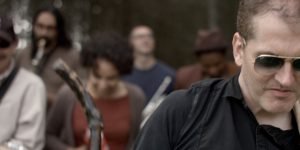 The respected Canadian recording artist and his band, The Perennials, will perform songs from his latest album, at the Nov. 18 show.

The keyboardist and vocalist is a friend of the Chesterville establishment’s manager, Dan Riitano, who’s proven to be a local groundbreaker in the calibre of talent brought to McCloskey’s. In his latest catch, Riitano has landed not only an entertaining, top-tier musician, but an erudite academic and five-time author with a PhD in history. An adjunct professor at the University of Guelph, Dr. Jason Wilson should also appeal to hockey fans as one of two co-authors commissioned to write the upcoming Toronto Maple Leafs’ Official Centennial Book. He has also served on the advisory committee for a project that’s set to become Canada’s national music museum.

Q. When did you release your latest album, Perennials, and how does the name of the album relate to ‘The Perennials’ who are scheduled to accompany you to McCloskey’s later this month?

A. We released Perennials earlier this year in, perhaps not surprisingly, the spring. The beauty of this new album is that, for the first time for me at least, the live show is very much what you hear on the album in terms of instrumentation and the actual musicians involved!

Q. You were immersed in Jamaican culture and music in the Toronto neighbourhood where you grew up as the son of Scottish immigrants. What was it about Reggae music that drew you to it, what is it about Reggae that still transfixes you, and what do you think Reggae offers an audience in a live context?

A. That’s a tough question. I’ve been at it – reggae that is – for 35 years now, I can’t even remember how it all came about. It wasn’t a conscious thing, I can’t remember waking up one morning and saying “oh, I’ll play reggae music”, it was just a natural destination for me. I suppose reggae offers such a beautiful canvass to create on; it’s transformative and hypnotic to some degree and it has this undeniable connection that links the rhythmic “one-drop” to the heartbeat of the listener.

Q. The CBC did a nice piece on you about 10 years ago, which played up the angle of “white boy emerges from urban neighbourhood to master musical genre not really associated with white people.” I don’t think that documentary drew the parallel, but humour me here: Is Jason Wilson to Canada and Reggae what Eminem is to America and rap music?

A. HAHA! Wow! Um, no. First, Canadian “ghettoes” – such as they are – don’t approximate the intensity of those urban centres in, well, just about everywhere else in the world. I suppose, however, there are some parallels in audience reaction to “whitey” performing that what is, at least traditionally, perceived to be a black musical art-form. Eminem and me surprise some people I guess! But I’m also guessing that 8 Mile is a bit different from Keele and Finch!!!

Q. Tell me a little bit about the new album and the reception it’s been getting. Does the album mark any kind of a departure for you, Jason?

A. It took 18-months to write (which I did in NYC when my wife was down working at the UN for a spell), and it certainly is a bit of a sonic departure for us. We’re effectively drumless this time around. We have the awesome Zaynab Wilson on cajon and percussion providing our backbeat, which leaves a lot of space to explore, but also allows for different colours to emerge. This makes us more nimble and dynamic than we’ve ever been. And we’ve been playing some awesome soft-seaters and theatres that probably could not have taken the standard Jason Wilson fare.

The response for the album and the show has been amazing. We’ve really been historically lucky with good critical reviews, etc… (the album was bandied about by the Polaris folks apparently), but I feel that it’s the best “show” we’ve ever staged. There’s a dynamism and unpredictability that really reels in the audience. It’s also a bit nerve-racking for us, but being on the edge like that is probably a good thing for the performance. Though pre-gig yoga is now required for me.

Q. Tell me a little bit about your fan base. Your music is a fusion of Reggae and Jazz, so is it fair to say you have pretty broad appeal?

A. Yes. I love our mashing up of genres and influences and seeing how this process is reflected back to us by our fans and friends. I never wanted to make a fusion of reggae and jazz by following a particular recipe or formula. Just when you think we’ve gone way outside on some jazz odyssey, the reggae groove comes back to warm us all up.

Q. I understand you have post-secondary degrees in history and have recently co-authored a book about the Toronto Maple Leafs. What is your particular historical specialty or interest and will you be weaving a bit of historical discussion into your upcoming appearance at McCloskey’s — even between sets? (The Nation Valley area does have its share of both history buffs and hockey aficionados!)

A. History is in everything I do. It has informed every project and almost every song I’ve written in the past 15-20 years! Officially, as far as my position as an Adjunct-Prof at the University of Guelph is concerned, I’m a “Canadianist”, specializing in a few fields, namely: the First World War, the cultural history of hockey, and Jamaican migration to Canada of the 1960s and 1970s and the subsequent effects on the host community. But my tastes and interests are all over the map and I’m always game for trivia! (I’m such a history nerd really).

Q. Regarding those Scottish roots of yours, have you ever attended the Mecca of all things Scottish in Ontario — the Glengarry Highland Games in Maxville? And are you looking forward to your Chesterville show?

A. I know it well, but nope, never been though. I’ve written a little about the early Scots who settled in this part of the country, and I know there’s a real depth to the Scottishness out here. I look forward to meeting both Scots and non-Scots at what will be our first ever show in Chesterville!

Q. How do you know Daniel Riitano, manager at McCloskey’s (aka The McCloskey Hotel)?

A. Daniel and I go WAY back. I believe we attended the same high-school in North Toronto for at least one year together. But we also share a very close mutual friend; shout out to Alan Davidson!

See Jason Wilson and The Perennials in their new video for the track Rummlegumption:

CBC’s The National also profiled Wilson several years ago. Both parts of that video appear below.

This month’s great lineup at McCloskey’s will also see performances by the Amanda Keeley Band, who are schedule to play the venue on Saturday, Nov. 19 — the evening after Wilson’s appearance.