“It’s obvious that the provincial government has given a mandate to the Upper Canada District School Board, and the mandate is to balance their [provincial] budget … they want to close the school,” declared St. Pierre, a South Dundas municipal councillor, at the Nov. 4 event. Sign-toting students and parents booed boisterously in response from the gymnasium bleachers.

Saying the board’s recent report on the issue favours “super schools” over community schools, St. Pierre exclaimed: “And we say what?”

“No!” bellowed the crowd.

Faced with a surplus of 10,000 student spaces across its jurisdiction, the board proposes to shut down 16 schools this spring. That includes Seaway District High School, whose grades 7 to 12 students would be divided between Chesterville and Prescott.

“Splitting our community,” said St. Pierre of that plan, “is not the answer.”

The councillor and other speakers repeatedly highlighted the impact a closure would have on the surrounding community and economy. 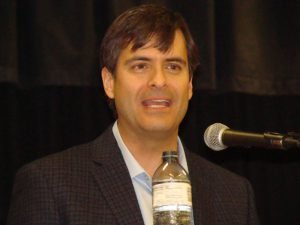 “I really, really love this place, and when I found out they were shutting it down, it broke my heart,” said Ross Video CEO David Ross, who grew up in Iroquois and graduated from Seaway. The multi-million-dollar tech firm’s main manufacturing facility has been an Iroquois fixture for decades. “There are some good business reasons for me to care about this,” added Ross. “If you kill this school, then you’re going to hurt the shopping plaza. If you hurt the shopping plaza, then all of a sudden there’s not much of a reason for young families to move to this area. If there’s no young families, I can’t get employees here; I can’t invest in this town the way I have … this is just wrong from a business point of view to shut down the anchor of a town.”

Ross also pointed to the irony of a provincial government spending money on economic development while its Education ministry imposes policies to “shut down the economic engine of this area.”

“Rural Ontario needs to have schools, and they need to have jobs,” declared Ross, who was slated join South Dundas Mayor Evonne Delegarde for a meeting with officials from the Ministry of Agriculture, Food and Rural Affairs on Monday of this week.

“One of the reasons I asked to have a meeting with politicians and the people in charge of economic development for Ontario … it feels like one side of the government is not talking to the other side,” the entrepreneur observed. “On one side, they’re is trying to pinch pennies, they’re really trying to save a little bit of money, consolidating schools— even though they’re investing in them — and shutting them down. None of this makes any sense; they’re adding to busing, destroying the education, for not very much extra money [saved]; they’re following a formula.”

“On the other hand, though … they want to invest in rural Ontario. They want to have incentives for business to come here. They want to pay Ross Video to grow and expand and invest. There’s money out there in the government. This doesn’t make any sense because they’re not balanced. And they really need a balanced approach.”

He said his own children had attended Ottawa mega-schools, describing the experience as “terrible.”

Moreover, he argued that rural schools can’t be treated like their urban counterparts. When his children’s Ottawa schools closed, it meant two to three extra minutes of travel. “It doesn’t work that way in rural Ontario. It should not be one size fits all. They need to understand there needs to be different systems in the way we measure this and the way we fund this. Because moving one school in Ottawa is not the same thing as shutting down a school in a 30- or 40-minute radius. It makes no sense.”

Seaway’s student population is about the same as when Ross attended 35 years ago, he also pointed out. “Here we are all these years later, and there’s [still] about 400-and-some people in the school. What’s the problem?”

The school is not in crisis and is simply the target of a “short-term money grab,” he alleged. To applause, Ottawa’s incoming CEO of the year concluded: I think we deserve to keep the school just the way it is. Seaway’s a great school in a perfect location. Let’s save it.”

Mayor Evonne Delegarde said that “even the idea” of losing Seaway was “devastating and unacceptable.”

The mayor outlined efforts by council and other local municipalities in SD&G to oppose the ongoing pupil accommodation review process. That included exploring the option of appealing any closure, the recent drafting of a joint document calling on the province to suspend the review process, and hiring consulting firm Doyletech to study the economic impact of closing both Seaway and Morrisburg Public School. She also highlighted South Dundas Council’s calling (unsuccessfully) on local trustee Jeremey Armer to help rescind the report that triggered the process.

Armer attended the rally but did not speak.

“In one fell swoop, the draft pupil accommodation review has devastated all the efforts the current and previous municipal councils, staff, businesses and residents have strived to achieve in bringing four municipalities … together as [amalgamated] South Dundas,” said Delegarde. “This bomb will divide our municipality, north to south and east to west, taking into consideration the county boundaries. We simply cannot allow this to happen. We must stand united to save our schools.”

“This was a fantastic school to go to … and it still is, you’re right,” he added.

His three sons wouldn’t be able to play sports if sent off to a more distant school, he said. “Because I can’t go to Cornwall every day for that kind of thing, so that’s a major factor for me. My kids have enjoyed sports because I’m close by and I can get them.”

Iroquois pharmacist Tracey Stewart emphasized the economic consequences to both Iroquois merchants and the students themselves. She estimated teens would lose at least $6,000 of work time at after-school jobs during their high school careers — enough to pay for their first year of post-secondary education.

Closing the school, observed university professor Duncan Edmonds, “sends a message to the whole outside community … that this is a not a growth area, this is a stagnant area. There’s no future here, go somewhere else. That is a message we cannot allow; it’s not true and we cannot allow it be sent. Imagine the impact of this terrible, stupid message on a young doctor and his or her family thinking about settling in this area, where they’re needed. Think of the business community … think of the impact on a real estate agent trying to bring people into this community. We cannot let this happen.”

The professor invited the school board to “look at the large picture, get off this stupid position you’re in now, work with us to build and grow this community, not to destroy it.”

He concluded on a fiery note: “And finally, once you’ve done your job property and rescinded this stupid recommendation, keep the hell out of our way.”

The proposed shutdown of Seaway would come into effect days before the Municipality of South Dundas’s only high school celebrates its 50th anniversary.

“Respect your past, appreciate your present, and protect your future,” Adair reminded the audience. “Before we celebrate Canada’s 150th birthday … let us put that Dundas County work ethic to good use so that we will be able to celebrate Seaway’s 171st birthday on June 10, and not its demise. Go Spartans!

In the video above, emcee Marc St. Pierre’s opening comments are interspersed with video of Seaway supporters marching around the school track at the Nov. 4 rally.