IROQUOIS — The local tech executive whose powers of persuasion have been compared to those of the late Steve Jobs will again take the podium in defence of Seaway District High School.

Both Seaway and Morrisburg Public School have been threatened with closure by the Upper Canada District School Board, which is working to finalize a sweeping plan that proposes — at this stage — to shut up to 29 schools across its jurisdiction. Seaway and M.P.S. are among a first group of 16 that would get the axe at the end of this school year, under the “Building for the Future” proposal. 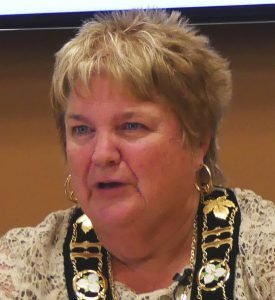 At the Nov. 15 council meeting in Morrisburg, South Dundas Mayor Evonne Delegarde reported on Ross’s upcoming ARC presentation. The mayor herself and Councillor Marc St. Pierre are also slated to present to the committee, she said, as is a delegation from the United Counties of SD&G. Long-time Iroquois resident, teacher and swimming lesson instructor Bonnie Adair will also make her pitch to save Seaway “and several other people from the area,” the mayor said.

The meeting, which begins at 6:30 p.m., will see presenters direct their remarks to the committee — largely composed of parents opposed the closure of the schools to begin with.

An ARC meeting involving Stormont and Glengarry counties — looking at the board’s proposed closures of schools in South Stormont, South Glengarry and North Glengarry — took place on Monday of this week in Cornwall. That session saw multiple speakers denounce the idea of closing rural schools, while ARC members applauded with the crowd.

Driven by a provincial funding change penalizing school boards with surplus student space, the proposed closures have also proven unpopular in the municipal council chambers of SD&G. All municipalities have now passed a circulated resolution calling for a one-year moratorium on the process. South Dundas Council officially approved it Nov. 15, preceded by North Dundas Council a week earlier.