In this screen capture from the Nov. 14 'ARC 2B' meeting, former MPP Jim Brownell addresses the Cornwall audience about saving South Stormont schools.

CORNWALL — Former Liberal MPP Jim Brownell has roundly condemned the provincial Ministry of Education for a “direct assault on rural Ontario schools” with up to 29 area schools contemplated for closure — including two schools in his home township of South Stormont.

Brownell, a one-time caucus colleague of Premier Kathleen Wynne’s, took dead aim at the Upper Canada District School Board’s “Building for the Future” report in the first Accommodation Review Committee (ARC) meeting held as a precursor to the proposed shutting of several schools in Stormont and Glengarry counties at the end of this school year.

“I’m sick and tired of our children and grandchildren being used as pawns so as to satisfy the dreams of the Ministry of Education and the Upper Canada District School Board,” declared Brownell to the panel assembled at the General Vanier High School gymnasium Nov. 14.

The retired teacher denounced the proposed closure of Longue Sault Public School (LSPS) — attended by his two grandchildren — and the corresponding shift of those students over to Ingleside’s Rothwell-Osnabruck school (R-O), whose high school population (Grades 7-12) would be displaced and shipped to Cornwall Collegiate Vocational School.

A long-time junior-kindergarten through Grade 12 school, R-O is “a model for the province,” he said, lauding its high graduation rate and extracurricular activities. “So why would they tear that apart?”

“This is not what we want in our community, the fastest growing municipality in all of SD&G,” said Brownell, also a former reeve of South Stormont.

He highlighted LSPS’s 96 percent occupancy rate, its better than average condition, and its  “much cheaper” operating costs.  “Why rip it out of my community?” he asked, angrily, about LSPS. “Keep it at 96 percent.”

Brownell also presented an alternative plan to boost R-O’s student population from the current 61 to 97 percent of the school’s capacity — by adding French Immersion across all grades and reimposing firm boundaries to pick up 213 additional students. “Rather than bleeding to schools outside our boundaries.”

Recognizing the board’s surplus of pupil spaces and the end of provincial top-up funding as “a problem,” Brownell exploded on the ministry’s push for larger, consolidated schools. “The Ministry of Education has provided a direct assault on rural Ontario schools, and that has to stop,” he loudly asserted, after pointedly thanking his Tory successor for attending that night’s event. “And I throw out those words to MPP Jim McDonell,” he remarked, adding he was “not afraid” to say the same to Ontario’s education minister. “I’ve already written her. What did I get back? I got back a form letter,” he said, adding to McDonell, “The same form letter that you received, which is wrong.”

The UCDSB is a “board of small but vibrant schools with welcoming environments that support learning,” he said, reading from the board’s own literature. “Well, if that’s so, we all agree on that.” Brownell backed up the point with data from the board’s May 2016 Program Review Report survey showing 60 percent of respondents agree that smaller schools offer “optimal learning opportunities for students.”

But the boundary strategy presented by Brownell on behalf of the Save South Stormont Schools group conflicted to some degree with a desire by the parent council at Tagwi Secondary School to avoid losing students.

While Tagwi isn’t on the closure list, a presenter from that school’s parent council, Joanne Haley, reported the Avonmore-based high school’s population would drop by 189 if boundary changes and school closures envisioned in “Building for the Future” are approved by the UCDSB on March 25. That includes some current — and unhappy — Tagwi students who would be uprooted from their school to go to Cornwall, starting next September.

But for the most part, the live-streamed event showed a very united front among all the presenters, with repeated hearty applause from audience and ARC panel members alike.

Mayor Ian McLeod of South Glengarry condemned the plan that would close Williamstown’s Char-Lan District High School in his township: “Releasing a study that clearly took months for several full-time staff to investigate and draft and then turn it to the public, and tell the people — who are also occupied with their full-time jobs — that they have 100 days to review and research other options is simply unreasonable.”

“We need more time, everyone needs more time, the board included, to properly and responsibly determine the truly best method of moving forward on this matter,” McLeod said, repeating the call for a one-year moratorium on the process — a demand recently passed at every council table in the United Counties of Stormont, Dundas and Glengarry.

South Stormont Director of Planning and Economic Development planner Peter Young advised that the UCDSB must comply with Ontario’s Provincial Policy Statement, under the Planning Act. The statement acknowledges that in rural Ontario, “settlement areas shall be the focus of growth and development and their vitality and regeneration shall be promoted.” However, South Stormont maintains that “removing schools from the hearts of our communities” fails to comply with that, Young said.

The affected municipalities are “looking at a legal review” of the Planning Act, he also reported. “I don’t think anyone’s looking to sue anybody … it [the Act] is something the board and municipalities has to abide by in all their decisions.”

The Dundas County family of schools also saw its ARC meeting on Thursday (Nov. 17) of this week — last in the series until January when final meetings will occur. 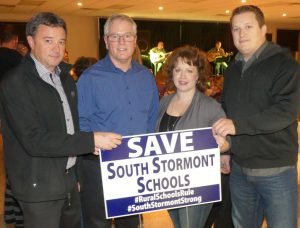 Get into the Holiday Spirit at Winchester Country Treasures, where owners Ken and Trish Boje
invite you to the popular gift shop’s 12th Annual Customer Appreciation Weekend, November 19 & 20.
All regular priced Country Treasures items are 20% off. This includes candles, calendars, furniture
and so much more! Located inside Winchester BMR.