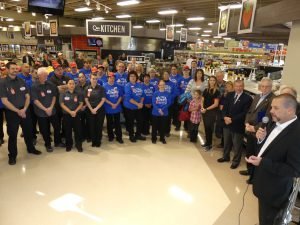 Store owner Dan Pettigrew, his wife Stephanie and their daughter Gracie, 7, were assisted by Sobeys Inc. directors and local dignitaries as they cut the ribbon inside the store entrance at 9 a.m. to let in a lineup of patrons eager to see the light-and-airy 32,000-square-foot facility.

“The floor-cleaning crew was still here at 5 a.m. this morning,” said Pettigrew, recounting the all-night push to get the store ready and completely moved over from the old location — at 512 Main Street — in time for the official opening.

In addition to having much more available space, the store features the look and amenities of an urban-style grocery store, with loads of heaped up fresh produce immediately catching the eye near the entrance, with an expansive wraparound food preparation area beyond that.

“We did a lot of demographic studies to get things right,” said Pettigrew, who took over the Winchester Foodland dealership earlier this year. Configured as a Foodland “new concept” store, the operation features expanded home-meal replacement (cooked and prepared food) offerings. “This is where our 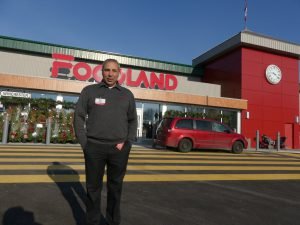 business is trending,” he said. The operation has also added the Natural Solutions product line and a new bulk foods program to its myriad of shelves.

They’re also expanding their grocery delivery service to three days a week, he said, to help those clients who possibly can’t move beyond the store’s old address in downtown Winchester, which closed down permanently at 6 p.m. the previous evening.

Jeff Johnstone, Director of Merchandising at Foodland, commended the Pettigrews, the store’s staff of 132 and the various trades on the transformation achieved at the establishment, describing the project as “one of the best” he’s experienced to date. “They’ve done a phenomenal job. The staff here are excellent.”

For his part, Pettigrew said the Sobeys team was among the many people “I owe gratitude towards.”

The Dean family had earlier sold their Vankleek Hill store to the grocery giant, which similarly rebranded that location as a Foodland outlet.

In Winchester, Sobeys’ renovations included sectioning off the western half of the structure, effectively turning Pettigrew’s Foodland operation into the anchor tenant on the east half of a completely refashioned, two-store mini-mall. Pettigrew, owner of the grocery store’s inventory as dealer but not the building itself, could offer no insight on what business Sobeys might have in mind for the west half, which features its own entrance.

The opening also brought a symbolic close to a reordering of the retail grocery landscape in North Dundas, which saw Winchester settle in to the idea of having a single grocery store again while Mike Dean Super Food Stores consolidated operations in Chesterville, Bourget and Sharbot Lake.

Certificates of congratulation were awarded to the new operators in Winchester from the federal, provincial and municipal levels of government: MP Guy Lauzon, MPP Jim McDonell and Councillor Tony Fraser (accompanied by Deputy Mayor Gerry Boyce) respectively delivered that recognition. Reflecting the happiness of the occasion, the proprietor donated $1,000 worth of Foodland gift cards to the Dundas County Food Bank.