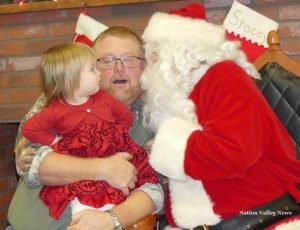 Evelynn Merkley-Barton, 2, was not impressed by her grandfather Glen Merkley accepting a peck on the cheek by Old St. Nick, during the Chesterville Breakfast with Santa, Dec. 3. Zandbergen photo, Nation Valley News

DUNDAS AND STORMONT — More milestone community celebrations have now come and gone in the lead-up to Christmas 2016, putting celebratory crowds on the streets of Dundas and Stormont counties on the weekend.

The 20th annual North Dundas Parade of Lights rolled through Winchester in mercifully mild conditions, Dec. 3. This year’s spectacle of more than 35 floats benefited from the ongoing LED lighting revolution that even saw several horses and a few people festooned with the cool, little illuminators. Moose Creek also lit up with its annual parade of lights that evening.

Among other events, the nighttime fun in those communities was preceded by Chesterville’s annual Breakfast with Santa event, Avonmore’s Christmas House Tour and a variety of events in Winchester leading up to the North Dundas Parade of Lights in that community.  Morrisburg also staged its Santa parade during the day on Saturday.

A photo gallery of the North Dundas Parade of Lights in Winchester appears below.

The crew from Badger Excavating used a drone to capture this year’s Parade of Lights from the air (below).

Here’s a snippet of the North Dundas Parade of Lights from the ground.

Below, this choir of firefighters from North Dundas Station 3 (Winchester) was thrown together Nov. 28 and performed Dec. 2 at the North Dundas Mayor’s All Stars Christmas Benefit Show, inside Winchester’s Old Town Hall. They did an admirable job. 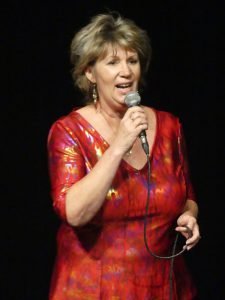 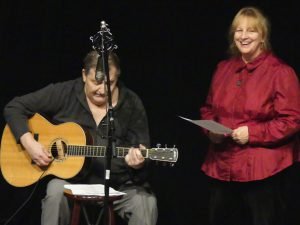 Below, a few photos from the 11th annual Touch of Christmas Country House Tour in Stormont County, Dec. 3.

Below, more photos of the activities Saturday morning, Dec. 3, at the annual Breakfast with Santa in Chesterville. Update: The event drew over 200 people.