WINCHESTER — It’s good to be neighbours with Canada’s vibrant capital city as the country approaches its 150th birthday.

That was the tenor of Ottawa Mayor Jim Watson’s keynote address at the fifth annual North Dundas Mayor’s Breakfast, Dec. 1 at the Joel Steele Community Centre.

“I’ve always been very impressed with Eric, who ran against a long-time incumbent, ran a great campaign, was elected, and was so popular in his last election, he got 100 percent of the vote,” quipped Watson, paying homage to host Mayor Eric Duncan, who was acclaimed in the last election. “I only got 78 percent of the vote; I had five people running against me,” added Watson to applause from the gathering of 200 people.

Acknowledging his recovery from a serious snowmobiling accident two years ago, the Ottawa mayor also joked he’s “now figured out the difference between the gas and the brake.”

Watson, who eventually got into a full-throttle performance as promoter-in-chief for his city in advance of the nation’s sesquicentennial, also highlighted the geographic size, diversity and rural nature of much of Ottawa — “the largest rural city in Canada.”

“Eighty-two percent of Ottawa is rural, agricultural and forestry land,” he pointed out, implicitly setting a tone of common ground with his rural North Dundas audience.

Toronto, Vancouver, Calgary, Edmonton and Montreal would all fit comfortably inside the boundaries of Ottawa, at the same time, he said. To illustrate the point, a map flashed on-screen superimposing those cities on Ottawa. “When you look at Calgary, that’s basically West Carleton,” he said. In contrast with Calgary, “there are actually more cows in West Carleton than people,” he joked.

Watson said he’s been working to change Ottawa’s reputation as “a sleepy town, grey flannel, button-down town,” a place where Swiss Chalet was the “closest thing we had to European cuisine” when he arrived to attend Carleton University in 1980. “We just didn’t have the kind of multicultural restaurants and communities we’re now known for.”

Ottawa continues to grow toward a projected population of one million people in 2019, he said, and 1.2 million by 2036.

Growth comes with costs for the city, he acknowledged, before proudly reporting Ottawa’s selection as the best place to live in Canada city by Moneysense Magazine. The same survey ranked the city as the best place for new Canadians, he added.

“Ottawa was also the top of the list for sustainable city, cycling-friendly city, and we’re ranked the most-business friendly large city in either North or South America, with the most stable employment rate in the country.”

Highlighting the “fun” of life in Ottawa, Watson showed an image of himself hoisting the Grey Cup when the Redblacks returned for their victory parade last week. He commended the team’s current leadership group and players, contrasting it with recent history. “We had a bit of drought, as you know,” he joked, recounting some of the travails of Ottawa’s previous CFL teams in the 40 years since the previous Grey Cup win. “Do you remember the Gliebermans and Horn Chen? Boy, it was like an episode of a Jerry Springer episode when they were in town.”

With only a month until Canada’s 150th birthday year, “Ottawa is right in the heart of the celebrations,” he said, outlining a new promotional campaign to draw Canadians from all over the country to the capital for “2017 Ottawa.”

The city expects a 20 percent increase in tourism visitors next year — tourism already being the third-largest industry in the city, he said.

“We do July 1st really, really well. Lots of people come to Ottawa for Canada Day, which is great. But we have to take that spread it over 12 months in order to ensure that we have hotels filled, restaurants doing well and so on.”

The plan to extend the party over the whole year starts with Dec. 31 fireworks on Parliament Hill. Contrary to popular belief, the Hill doesn’t normally host fireworks to ring in the New Year, Watson said. But on this upcoming New Year’s Eve, they will have two shows — complete with live at music — one at 8:17 to mark the change of year on the International calendar and again at midnight.

Watson delivered a sampling other attractions to look forward to in 2017, including:

“This is just five percent of the events coming to Ottawa,” the Ottawa mayor emphasized.

Mayor Eric Duncan reflected on his recent 10th anniversary of first being elected to North Dundas Council at the age of 19. But Duncan reported that his visiting Ottawa counterpart was marking 25 years — to the day — of being sworn in for the first time, as the audience applauded those milestones.

Duncan admitted to changing his thinking on Ottawa, explaining he used to view the city as “competition.”

“We’re not competition, the more you get thinking about it,” he said, noting the “thousands and thousands of people that reside in North Dundas that rely on a good Ottawa economy, rely on jobs [in Ottawa] — my mother being one …”

“The line is: higher water raises all ships,” he remarked. When the Ottawa mayor cuts the ribbon on a new enterprise with 200 employees, “I say that’s great. I know there’s going to be people from North Dundas that are working there.”

Duncan also used the occasion to promote the latest “report card” document for his township. The 28-year-old mayor spearheaded the annual release of the brochure as well as the breakfast event that has featured a number of local celebrities as keynote speakers over the years. The format has since been copied by other townships from time to time. 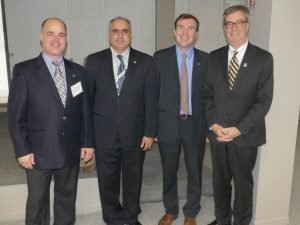 See Mayor Eric Duncan’s speech in the video below.