From left, South Dundas councillors Marc St. Pierre and Archie Mellan, and Economic Development Officer Rob Hunter look on as consultant Rick Clayton of Doyletech offers an assessment of the economic damage the municipality will sustain if two schools are closed by the Upper Canada District School Board. Zandbergen photo, Nation Valley News

MORRISBURG — The economy of South Dundas will take a $15.5-million to $17.5-million whipping at the hands of the Upper Canada District School Board if Seaway District High School and Morrisburg Public School are shut down, an economist advised municipal council during a special meeting Jan. 5.

Doyletech Corporation’s Rick Clayton delivered the number as part of a withering assessment of the board’s ‘Building for the Future’ plan to close both schools at the end of this school year. The whopping figure includes a direct $5.5-million impact in the “Iroquois-Morrisburg corridor” plus broader effects — various negative spin-offs — the school closures would trigger in South Dundas as a region.

“That takes into account the loss of spending that was done by the teachers and staff, losses at the local stores, the losses that come about from lack of maintenance [work at the schools],” he said, also estimating full-time job losses at 18. “Does $5.5-million sound like a lot of money? Well, actually, in this community, yes, it is,” he added, contrasting the figure with the municipality’s annual budget of $16.9-million.

“How would you like to have to pay one third more for all of the same services you’re getting right now? Because if the economy goes down that much, that’s the kind of burden that’s going to get placed, one or the other, on all of the community.”

The Doyletech report warns of a South Dundas “hollowed out” by the closures.

Direct impacts include approximately $600,000 in lost annual sales at the Iroquois Shopping Plaza — with almost $500,000 of that attributed to the 50 percent of high schoolers who spend an average of $10 per day at the mall. “You don’t think students would spend $10 a day, but every other one of them does. So certain businesses are going to take a royal hit.”

Teachers will also take their personal spending with them as they gradually move elsewhere after finding positions at other schools. “We reckon about half are going to leave South Dundas over a period of about five years,” he solemnly intoned. 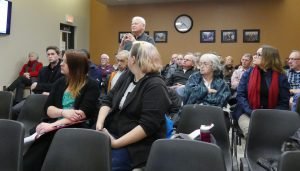 Dr. Gerry Rosenquist poses a question to the consultant after the presentation. The public gallery was almost full — but not packed, either. Zandbergen photo, Nation Valley News

Clayton also noted respective HST losses of $330,000 and over $200,000 for the provincial and federal governments.

“How much money is it [the province] going to save by closing these schools?” he rhetorically asked. “It’s not in anybody’s interest to have the economy of South Dundas constrained or restricted.”

But the municipality’s economy faces a squeeze of up to $17.5-million when other likely consequences are considered, according to the report.

That includes $2.5-million lost when an estimated 30 student families leave the municipality as a result of the closures. “Gradually, they will drift away. Why should they stay? If you have to commute all the way to Prescott, or Ottawa or Winchester, why don’t you sell your house and move to those places?”

Though he didn’t mention Ross Video or its CEO by name, the speaker also drew attention to David Ross’s vow of no further expansion in Iroquois if the local high school pulls out. A $6-million payroll “is going to be lost to this community and not expand,” Clayton said.

Similarly, “there’s no reason that local builders should put up more houses,” he said. A developer’s recent plans for a 200-home subdivision in South Dundas, if slowed by half, would represent a loss of $2-million annually, he reported. “The houses that would have been built, and now they aren’t going to be built. And it could be worse. It could be he [the developer] gives up on building houses in this part of the world altogether because he doesn’t see how he’s going to be able to sell them. The families that would have lived there, they won’t. That’s another forestalled expenditure that you won’t have.”

Existing property owners can look forward to bad news as well. “By the way, I’ve saved the best for last, all your houses are going down in value,” he declared, without revealing the precise drop.

Beyond dollars and cents, special-needs and at-risk students will absorb “one of the biggest hits,” he said, predicting more drop-outs and a higher number of those students kept from reaching post-secondary education, dooming them to dependency on the state. “Which sort of educational institution stands the best chance of nurturing these students? Getting him or her to be a productive full member of society. Is it going to be a small school, or is going to be the mega-school … Which one of those is the better proposition?”

“In fact, as near as we can tell, educational systems are subject to diseconomies of scale. You make it bigger, it gets worse,” — Rick Clayton, Doyletech Corporation

The boundaries of Children’s Aid Societies are crossed when shipping students from Dundas into Grenville county, he also pointed out. “So if a student is abused at home — physically, emotionally, sexually — if it’s the local high school, small institution, that child probably — not necessarily — will have the confidence to talk to one of his or her teachers. The Children’s Aid Society for that region can act immediately. That isn’t what happens if you cross CAS boundaries … It’s a much more complicated process.”

Noting the economic impacts in combination with this risk to “challenged” students, Clayton declared: “I cannot see any justification for closing these schools.”

Further, the research shows no economy-of-scale benefits to consolidating schools, he asserted. “Meaning, when you make something bigger, it gets better and cheaper. In fact, as near as we can tell, educational systems are subject to diseconomies of scale. You make it bigger, it gets worse,” he exclaimed.

To illustrate the point, he reported how one former principal of a mega-high school told him he knew the week would be bad by “counting the police cars lined up at the front gate.”

The supposed increase in ‘programming’ available at larger schools only benefits a small minority of students, he asserted during a question-and-answer session after his presentation.

“Personally, I think these school closures, especially the closing of the Seaway District High School, is most unwise” and “doesn’t make sense,”  the economist warned in conclusion.

He had earlier prefaced his remarks by insisting that Doyletech doesn’t produce “propaganda” for clients and sticks to the facts.

Mayor Evonne Delegarde thanked Clayton for his presentation. “As you can see, he’s presented a picture that’s very bleak and dismal, and we’ll have many years of ripple effects and the aftershocks will be for many, many years … should we lose Seaway District High School.”

Five of six townships in SD&G hired Doyletech to assess the damage to their respective communities if the Upper Canada District School Board (UCDSB) proceeds with its controversial proposal to close multiple schools. The board will vote on final recommendations March 23.

Also listen (above) as Clayton asserts that sexually or physically abused students will be at greater risk of not finding help if they are bused to school outside the jurisdiction of their local Children’s Aid Society of SD&G. The economist also refutes the notion that school consolidations create savings and “economies of scale.”