STORMONT COUNTY — Proposed school closures and pupil pullouts would pulverize the Stormont County economy to the tune of almost $17-million annually, according to the consultant reporting to township councils in North Stormont and South Stormont this week.

The yearly hit would range from $1.6-million to $9.1-million in North Stormont alone, with one-time job losses of up 27 full-time positions if both North Stormont Public School and Tagwi Secondary School are shut down, Clayton reported in Berwick Jan. 10.

Meanwhile, South Stormont’s economy will absorb a $7.5-million annual impact, with the loss of 28 jobs, if high schoolers at Ingleside’s Rothwell-Osnabruck School are shipped out and Longue Sault Public School shut down.

While the Tagwi isn’t on the official closure list, Doyletech concurs with local fears that the board’s proposed shift of 167 students out of the Avommore-based high school may doom it to closure in the near future.

“Shuffling off” those high school students amounted to “lunacy,” Clayton told North Stormont Council. The resulting closure of Tagwi “under certain scenarios, certain conditions, is a possibility,” he added.  “Because if the boundaries as currently defined were changed so we only had a North Stormont mandate, and the students in South Stormont currently coming to Tagwi were shuffled off to Cornwall … it [Tagwi] becomes vulnerable,” said Clayton, noting the school’s student population would only be about 330 at that point  — or less than 50 per cent of capacity. 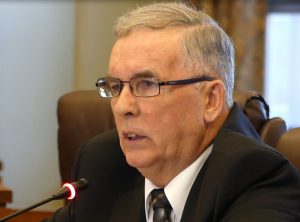 In Long Sault Jan. 11, Clayton laid out the negative numbers the report says are based on “extremely assumptions and multipliers for the model runs. A loss of $7.5 million is a huge hit in a local economy where the entire municipal budget is only approximately $15.2 million.”

“When people move into our community, it’s one of the first questions they ask: Where’s the school?” South Stormont Mayor Jim Bancroft told Nation Valley News. Bancroft described the proposal to close LSPS and consolidate those elementary students at the R-O campus, while shipping the R-O high schoolers out to Cornwall, as “very short sighted” and an “economic disaster.”

Said Bancroft in a subsequent press release: “South Stormont, over the last several years, has provided 30 percent of new growth in all of SD&G. South Stormont continues to work with our ARC committee and school board representatives. South Stormont and our fellow SD&G neighbours are hopeful the board officials will recognize the severe impact these decisions will have on our local economy,and they be willing to find alternative solutions to closing rural schools.”

The five reports prepared by Doyletech in Stormont, Dundas and Glengarry, will form part of each affected township’s submission to the Upper Canada District School Board, which proposes to close 29 schools across Eastern Ontario. UCDSB trustees will vote March 23 on the closure, many of which would take effect in the coming school year.

Above, in North Stormont, consultant Rick Clayton declares as “lunacy” the proposed shifting of some Tagwi students to Cornwall.

In the video above, North Stormont Councillor Randy Douglas (right) vouches for the quality of education at North Stormont Public School, observing that its proposed closure follows a previous decision by “outsiders” to withhold French Immersion from the Berwick-based school.