WINCHESTER — Going head-to-head Friday 13th against a Demon squad proved too much (and too unlucky) for the leading West Division Atom B Rep team during a contest in Winchester last week.

Smiths Falls fell to the local North Dundas Demons, who notched a huge 2-1 win against the visitors. The ‘Bears’ had previously lost only one other game earlier this season — to East Division-leading Char-Lan.

The Demons’ Drew Sleeth opened up scoring in the first period with 1:25 left on the clock. Mason Hummel picked up the assist as the North Dundas team — a crew that also includes seven players from South Dundas this year — took the early lead.

The Bears clawed back with a goal in the third, tying the game at one apiece at 9:13 remaining. But the Demons snatched the 2-1 win on a go-ahead goal by Carter Williams, who received a helper from Kade VanBeilen on the 4:27 play.

North Dundas stood at fifth out of sixth in the East Division, with 13 points in 14 games played, following the win over Smiths Falls. 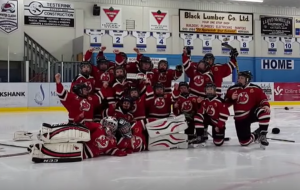 The Jan. 13 victors, from a video still captured earlier this season. Courtesy image