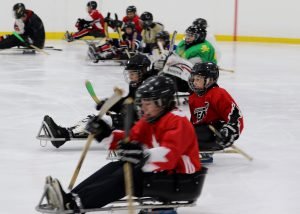 WINCHESTER —  A local minor hockey team learned about a different version of the sport in Winchester on Sunday, Jan. 15.

Lisa Berry got the idea of introducing her son and other players on the South Dundas Peewee Rep team to sledge hockey after talking with local enthusiast Matt McLean of Winchester. “I thought it would be great to get the minor hockey kids out on the sledges, expose them to a different type of hockey and give them an appreciation for the complexity of the game,” she said in an email.

She says McLean put her in touch with the Eastern Ontario Sledge Hockey Association, where Andrew Henry helped organize an event for the squad of youngsters at the Joel Steele Community Centre.

A group of volunteers came out to Winchester with the equipment and expertise needed to run an instructional and fun session for the team. Among the volunteers were both national Ontario team members as well as local players, including McLean.

“It was a wonderful experience and I am so glad we were able to give the kids this opportunity to learn something new,” she says.

Among those volunteering for the session was Team Ontario player Sam Safford, a high schooler from Stittsville. “He’s been playing only since November 2012, and his progress has been simply amazing. He went from a very shy kid to a nicely confident young man who doesn’t shy away from … the biggest opponents,” says Berry, noting that sledge hockey is a hitting game.

Team Canada defenceman Tyrone Henry also participated in the Winchester event. “He’s one of the newest on the team, having joined last year. His goal, of course, is to play next year in Korea at the Paralympics,” Berry reports. Henry “was a defenceman in regular hockey and sometimes played goalie until he was paralyzed in a car accident in September 2010.”

After learning how badly his spinal cord was damaged, he set a new goal of playing for Canada’s sledge hockey team, having Paralympics after having watched it on TV during the Vancouver Paralympics — an account relayed to the participating Peewee players in Winchester. “He was unable to play any sports for a year but has since done wheelchair racing, hand-cycling, waterskiing, alpine skiing, golf, rowing and, of course, sledge hockey,” Berry reported. 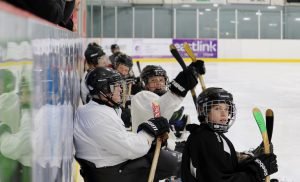 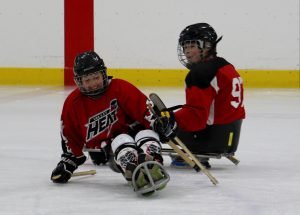 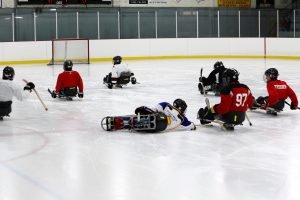 Images of the action as the sledge hockey guests scrimmaged with their Peewee ‘students.’ Courtesy photos