Make that a 10-pin bowling alley.

It’s been at least 35 years since the Main Street location included bowling lanes — a traditional five-pin operation at the time. Bowling hasn’t been part of the Winchester scene since a previous owner of Sutton’s ended that aspect of the business in the early 1980s.

Hassan and Suliman, residents of Ottawa, bought the café in August 2015. Hassan said they conducted “a small survey” of patrons and residents before deciding to take the plunge back into bowling. The project, which included total renovations to the main dining room and a new building facade, got underway last June. The diner has been closed since then, only re-opening this past Saturday, Jan. 14.

“It took a little longer than expected,” conceded Hassan. “It was a big investment, but we felt it’s going to give a return.”

They’ve had a good response so far, the co-owner said, with the establishment now open seven days a week to accommodate the expected extra traffic. They also plan some more menu changes, he said, in addition to the wraps, sandwiches and pizza introduced when the new owners took over.

The new bowling lanes have gone back into area where the original ones once were, although nothing remains of the originals. Everything, right down to the flooring, is new — installed by a Montreal company specializing in the segment. Modern lighting and tablet-like scoring equipment — complete with large overhead screens — complement colourful, large bowling balls with traditional finger holes found in the 10-pin variety. Players photos are quickly taken by the equipment and flashed up as avatars on the overhead screens, accompanying the scoring stats. Users can even opt to link it all into Facebook.

“I really hope they do well. Winchester really needs this,” said Diana Sutton-McKendry, whose father bought the original bowling alley operation 50 years ago. The establishment stayed in the family until 1990.

“It’s nice for us to come back and see dad’s name is still being used,” said Sutton-McKendry, who recalled that when her father bought the place in 1967, pins were still being set manually by pin boys. “Dad put in automatic pin setters in the early 1970s.”

The part of the building housing the lanes was known as the Beaver Block, she said, remembering how the family discovered a large metal sign in the basement with that designation. For years, it hung prominently outside the bowling lanes, in the part of the structure that was also occupied by a barber and beauty shop. The bowling lanes saw active use by a number of leagues, she added. “They catered a lot to older leagues.”

Above, Vince Zandbelt (and Mayor Eric Duncan) try some early shots at the pins at Winchester Bowling. Nation Valley News 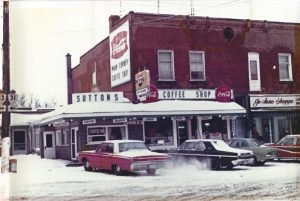 Sutton’s as it appeared many years ago. Courtesy photo 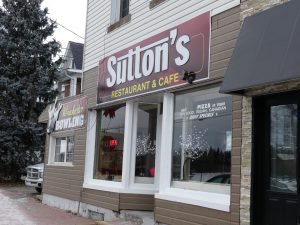