FINCH — A weekend of broomball swept through the Finch Arena where organizers again put on their annual Finch Youth Tournament, Jan. 13-15, hosting more than 300 people.

The event drew 19 teams from around the region to North Stormont — longtime hotbed for the heritage Canadian sport. In addition to the hosting community, Participants ranged from three to 15 years of age and came from Russell, Carleton Place, Akwesasne, North Stormont as well as Maniwaki, Que.

“We’re the only youth broomball tournament in Eastern Ontario, outside of the provincials,” noted Cynthia Daoust, head convenor for the local Finch program. “We have quite a few teams going down to the provincials in Barrie in February,” she added.

Last year, the Finch contingent sent 11 teams to the provincials “and came home with nine medals,” Daoust pointed out.

Also prominently displayed in the Finch Arena foyer on the weekend were display boards and memorabilia from last November’s World Broomball Championships in Regina, Sask. Eastern Ontario was well represented with co-ed, women’s and men’s teams at the competition. The men’s team — the Ottawa Nationals — returned with the gold medal.

Daoust noted that residents of North Stormont routinely play on teams that go to the World Championships — and it all begins with their activities in Finch. “The kids can start out here, and they can end up on a world-calibre team, and not have to travel that far. The men’s team came out of Ottawa.”

With a season that begins in September, broomball is an attractive sport not only for the increased potential to compete at the very highest level, but its lower cost as well, according to Daoust. The annual fee charged per child in Finch ranges from just $190 to $195 in Peewee and Bantam/Midget — and $160 at the youngest Sprout age category. Mandated equipment includes a hockey helmet, knee and shin pads and padded gloves. Sprouts play with less padding.

However, jerseys are supplied by the program, Daoust explained, and the annual fee also covers play in 20 regular season plus the annual tournament. Ice times are the same place, same time every week, and there are no games on Halloween, Thanksgiving or between Christmas and New Year’s, she said.

Fees are pro-rated downward for participants joining part-way through the season. Prospective new players are always welcome to try out the sport, using available borrowed equipment.

“We had a girl join Bantam/Midget just last week,” Daoust pointed out. “And we had two new ones join just before Christmas. The one young lad got ‘hustler of the game’ last night.”

Recent converts find broomball “a nice change from hockey,” she said. “They enjoy the atmosphere and playing for the fun of the game.”

Approximately 100 youth are registered in the Finch-based program. Organizers have worked to rebuild numbers after losing a season, a few years ago, when the Finch Arena underwent renovations that turned into a more extensive rebuilding project than first envisioned.

Organizers introduced separate medals for A, B and C divisions for the first time this year. 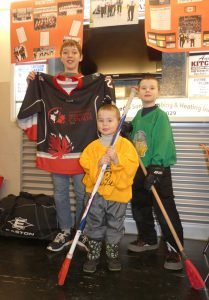 From left, Etienne Bray, 13, Spencer Casselman, 3 and Brady Casselman, 8, pose at the Finch Youth Broomball tournament, in front of a display featuring last November’s World Broomball Championships in Saskatchewan — where the men’s team won gold with a squad of Eastern Ontarians. Etienne clutches a jersey from the gold-medal-winning team. The boys in the photo play the sport in Finch at the Bantam/Midget, Sprout and PeeWee level, respectively. Zandbergen photo, Nation Valley News

Above, a clip of the Finch Green Machine versus a combined Carleton Place/Akwesasne team, competing in the PeeWee level at the Finch Youth Broomball tournament, followed by some Sprouts action with Finch (in yellow) against Russell. Nation Valley News