But first, the Vancouver resident had to attend to the business of judging the Matilda Winter Carnival talent show in Dixons Corners. Revived this year, the Carnival runs through Jan. 22 this weekend.

South Dundas Optimist Club President and plumber Ben Luimes landed the accomplished vocalist as judge for the Friday night show after running into him during a job at a Morrisburg residence a couple of months ago.  The address happens to be the home of the tenor’s aunt and uncle, where the Hawaiian-Canadian artist likes to stay from time to time. “My aunt is like my mother,” explained the 27-year-old.

Luimes asked the question and Hiles agreed. And that’s how a performer whose pipes have impressed everyone from Queen Elizabeth to the Emperor of Japan, to Justin Trudeau (and many of his predecessors) presided with South Dundas Mayor Evonne Delegarde and Colleen Leslie at the Matilda Hall judges’ table Jan. 20. He assumed the role of scrutinizing judge, asking a couple of the performers to sing a few lines without prerecorded music — just as TV’s Simon Cowell might. That included the show’s overall winner, Mackenzie Pretty, 15. She masterfully sang one show tune, only to be gently quizzed by Hiles who suggested she try another one, Wait a Bit, without a backing track. Pretty knew the number by heart and nailed it, a capella.

The judge himself later performed Irish ballad Danny Boy from the Matilda Hall stage for the audience — saying it was a favourite he had sung numerous times with the late Canadian finance minister, Jim Flaherty. Brian Mulroney, he told Nation Valley News, has also joined him on the Irish ballad. Hiles admitted he’s become known as the Conservative Party’s go-to tenor, though Justin Trudeau — a personal friend — has deemed him his “favourite Liberal tenor.”

See the video above for clips of every performer in the Matilda Winter Carnival talent show.

Dustin Hiles, an accomplished opera singer from Vancouver, sings Danny Boy. Hiles served as one of the show judges. 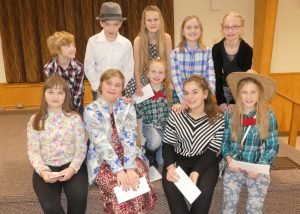 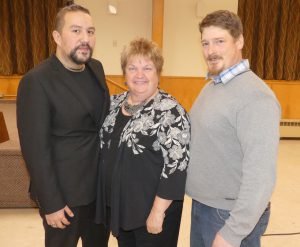