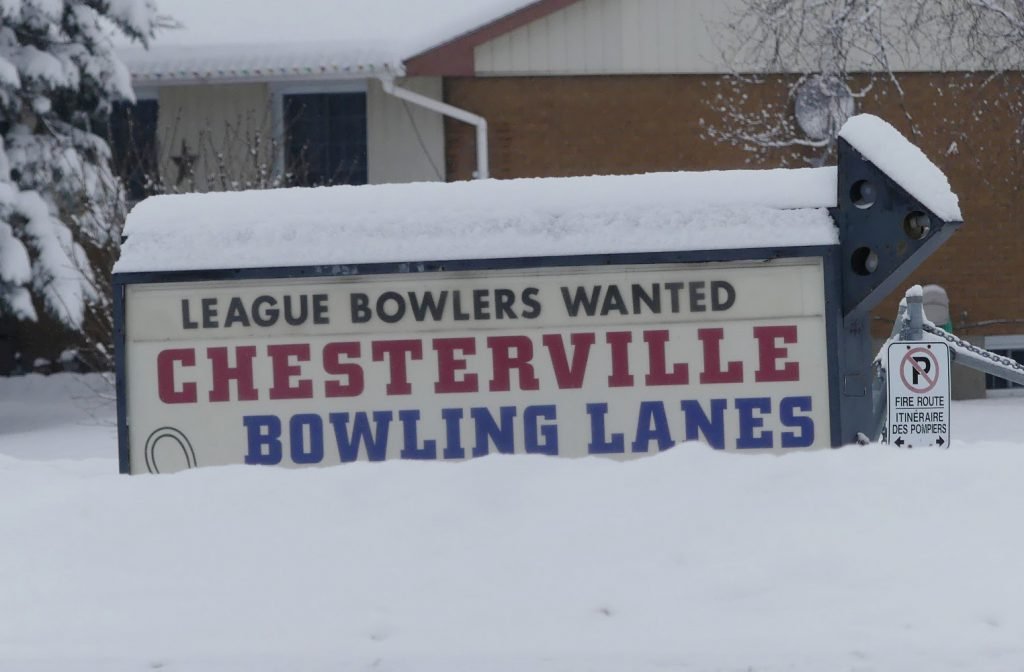 The sign at Chesterville Bowling Lanes, earlier this winter.  Shari Boyd has been a fixture at the operation for many years. Zandbergen photo, Nation Valley News

Boyd did have insurance, partner says, but money required up front for hospital care

CHESTERVILLE — The community is rallying behind a Chesterville woman who has suffered a brain aneurysm while on vacation in Cancun.

Shari Boyd remains in the intensive care unit of a hospital in the Mexican city, “with friends and family by her side awaiting surgery,” according to the gofundme.com campaign page set up yesterday by Danielle Nash.

Organizers are also arranging to transport Boyd’s partner, Ron Robinson, from here to Mexico. The Chesterville couple are well known in the area as the owner-operators of Chesterville Bowling Lanes.

Her “skyrocketing” medical bills are already in excess of $11,000, according to the campaign, which has to date raised over $15,000 and garnered over 450 Facebook shares.

Local resident Daren Nurse is among those who have shared the campaign from the crowd-funding page.

“Sending all our positive vibes to you Sherry, and our prayers are with you and your family. Get better soon and home again,” wrote Susan McIntosh, a contributor listed on the gofundme.com campaign that aims to raise $30,000.

Avid bowler Betty Wheeler of Finch was surprised to hear of Boyd’s plight when contacted by Nation Valley News this morning. “That is terrible that Shari’s in hospital like that,” she exclaimed.

Wheeler pointed out that Robinson and Boyd are great supporters of the community, annually hosting the local Bowl for Kids’ Sake fundraiser tournament in support of the local Big Brothers, Big Sisters chapter. This winter’s event in Chesterville raised $5,000, more than half of that generated by Wheeler’s team once again.

The couple are also known for hosting an annual awards ceremony and luncheon handing out numerous trophies to many youth bowlers each spring. They have owned Chesterville Bowling Lanes for the last 12 years.

Contacted by Nation Valley News before 10 a.m. this morning, Ron Robinson said his spouse has come out of the operating room, and that he’s now awaiting word on her condition. “She’s had the surgery, and that’s great, but I don’t know what condition she’s supposed to be in,” said Robinson, who expected to receive a phone call from the hospital at 11 a.m.

He said that Shari went on vacation for a week with three friends, Mike Desormeaux and his girlfriend, Shannon, and another woman, Tracy. The trip of a lifetime represented the first time the couple have been apart for more than one night in 23 years. “Of all the times to happen, it has to happen during the only week we’re not together,” said Robinson, who doesn’t have a passport but hopes to get one quickly and travel to Mexico if Shari must stay there for more than the next three or four days. He has not heard from any Canadian officials on the possibility of getting travel documents in a hurry.

“Her sister’s going out there today,” he added.

Shari got sick and was found passed out in the washroom at 3 a.m. yesterday, 12 hours before the group was due to fly back to Canada, he said. While she did have insurance, the Mexican medical system requires payment up front, he said. “They want money up front to put you in the ambulance and they wanted $7,500 just to start the operation.”

This article was edited to correctly reflect the couple’s address in Chesterville.