Guests — including a Syrian refugee couple — at the March 4 North Stormont Refugee Support Coalition fundraiser dinner in Finch. Scroll down for another photo with their identities. Zandbergen photo, Nation Valley News 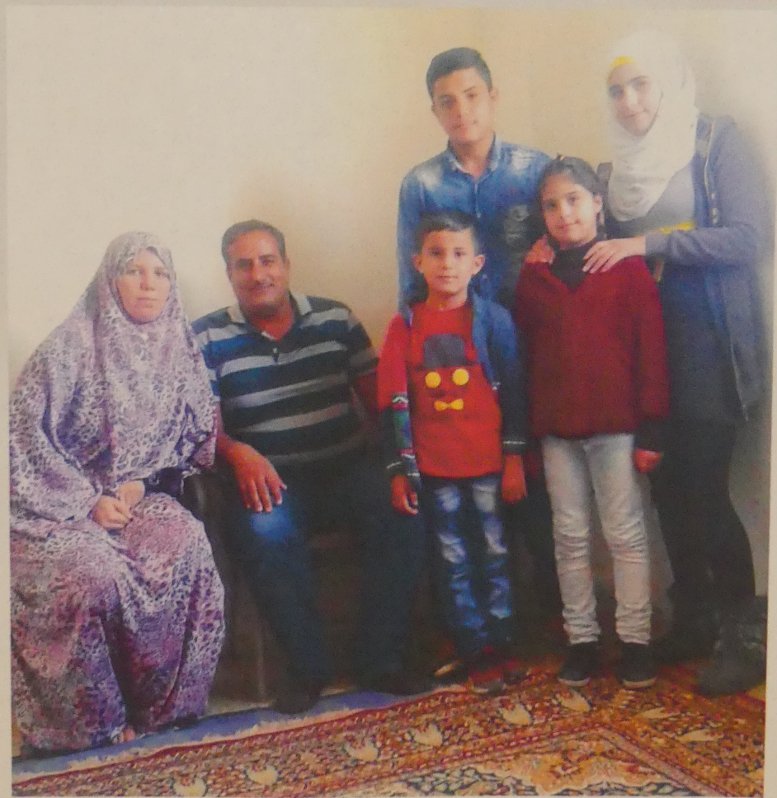 Salame Hussein Al Mounif, his wife Bouthaina Badaoui Moudawar and their four children — sons Hamza and Haidara and daughters Sara and Soulat — are coming to North Stormont with the support of the community.

FINCH — The local effort to sponsor a Syrian refugee family to North Stormont was nourished by a 10-course Lebanese banquet at the Finch Arena last Saturday night.

Two-hundred and sixty guests enjoyed the event that raised $16,552 for the North Stormont Refugee Support Committee. The initiative has already chosen a young Syrian family of six who have taken refuge in Lebanon after fleeing their war-torn homeland four years ago.

Daad Elsaadi, matriarch of the local family that operates Finch Pizzeria, scouted the Al Mounif family while staying at her second home in Lebanon last year. Salame Hussein Al Mounif came to Elsaadi’s attention while toiling as a janitor at the college where she was taking a course.

He and his wife, Bouthaina Badaoul Moudawar, and their four children — sons Hamza and Haidara and daughters Sara and Soulat — are expected to arrive here in about eight months, said Janice Wright, chair of the coalition involving a number of area people, shortly before the dinner got underway.

“They’re living in a garage right now,” Wright said, adding that Al Mounif has also been working as a cook in a UNHCR refugee camp. Before fleeing Syria, he was a real estate agent.

“He’s on the phone waiting for me to call him,” added Daad Elsaadi, briefly stopping to talk while orchestrating the bustling activities in the kitchen that evening.

Comprising a collection of individuals from around Avonmore and beyond, the Coalition has applied to privately sponsor the family.

Money raised that evening “puts us pretty close” to the financial goal established by the group, according to Wright.

Next comes the continued wait after submitting their application to Canadian authorities in January. “The paperwork we have to send to the government is a very complex process,” she explained. “It’s obvious the government is being very careful, and they want to vet the people properly.” 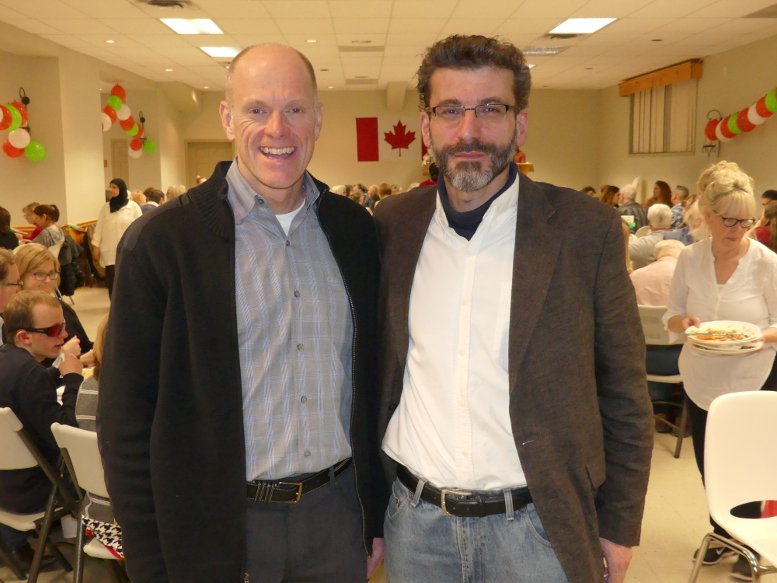 The group is responsible for raising all funds themselves, and although non-denominational in focus, the arrangement does fall under the auspices of the United Church of Canada as sponsorship agreement holder. They’re also partnering with the House of Lazarus in Mountain to handle incoming charitable donations.

Wright said she was heartened by the amount of support shown by the broader community. “That’s what surprised me the most,” she candidly remarked.

“The group is really solid, and for something like this, you need that,” said Coalition member Randy Douglas, also a councillor for the Township of North Stormont. To have reached the point of identifying a family and fundraising to support them for a year was “very gratifying after our start 15 months ago,” he said.

Al Mounif is prepared to live in rural North Stormont, according to members of the Coalition, who point out that he grew up on his father’s rural sheep farm. Wright said the former real estate agent hopes to pursue a career in the food services industry.

Syrian Safa Almalki of Ottawa, a Syrian immigrant on hand for the Finch fundraiser, vouched for the superiority of 100 percent private sponsorship over those refugees brought in with some level of government funding support. “The private-sponsored refugees are better off than the government-sponsored refugees,” said Almalki. He explained that privately supported refugees are more likely to find some kind of work, more quickly — vital for their mental wellbeing — and better integrate into Canadian society by ending up in places like rural North Stormont, where connections are fostered between refugees and the Canadians directly supporting them.

The alternative sees less of a connection and a pull toward enclaves, Almalki suggested.

“There’s a lot of clustering that happens with refugees, and that’s a problem,” said the product line manager who quips about having a “side job” assisting Ottawa Valley groups that sponsor Syrian refugees.

To date, he’s lent assistance by looking in on 11 such families, with three more due to arrive this month.

Recently arrived refugees also enjoyed the meal in Finch, including a young couple — Feras Al Zamal and Huda Al Sabbagh — at the table of their Ottawa-area sponsors, including Mostafe Zommo, originally of Palestine.

“It’s very good, but cold,” said a smiling Al Zamal, who fled Syria to Jordan with his wife and their three children. They arrived in Canada last summer. 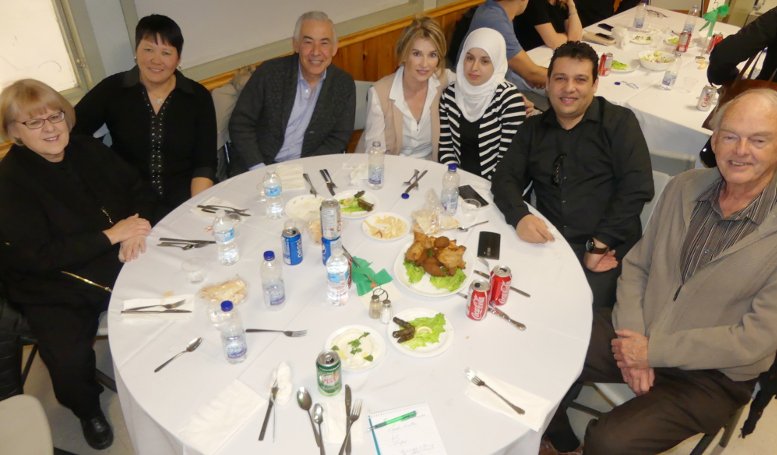 “Jordan was really, really difficult for them,” said Diane Fulford, member of their sponsoring group.

“The trauma follows them. They still have family back home. Their sister’s home was just bombed,” she said.

Referring to the couple’s red-headed sons — six, eight and 10 years old — she remarked, “It’s been nice to the see the boys blossoming, enjoying school, and wonderful to see them snowshoeing and tobogganing.”

“It’s pretty awesome watching the resilience of the family. They’ve been inspirational to the whole group.”

“It’s been the most rewarding experience you could imagine,” added Richard Fulford.

Members of the neighbouring Dundas Coalition for Refugee — working to assist a Syrian refugee family of five currently stuck in Egypt — were inspired by the success of the Finch event, where they also had a table.

Moira Law, chair of the Dundas group, said their targeted family faces “a very difficult situation” in Egypt, where their application has been awaiting review since last July.

“The kids are not allowed to go to public school. They’re not really welcome,” said Law.

The Finch banquet included the spectacle of traditional Lebanese dance. (See video below by Birket Foster of Chesterville.) The multi-cultural event also saw Stormont County 4-Hers carrying out dish after dish to the tables in the packed hall.

Daad Elsaadi later took the stage to offer heartfelt thanks at the conclusion of the event, to all the volunteers and her assisting family members — and a higher power.

From Lebanon with love …
Daad Elsaadi of Finch Pizzeria offers heartfelt thanks to those who worked on the fundraiser banquet in benefit of the North Stormont Refugee Support Coalition — including her husband, daughter-in-law, brother, sisters and other friends — Saturday night at the Township of North Stormont Arena. The event drew around 260 people for what turned out to be a 10-course traditional Lebanese dinner. Elsaadi has personally visited the Syrian refugee family that local Coalition organizers are sponsoring to bring to North Stormont from Lebanon. 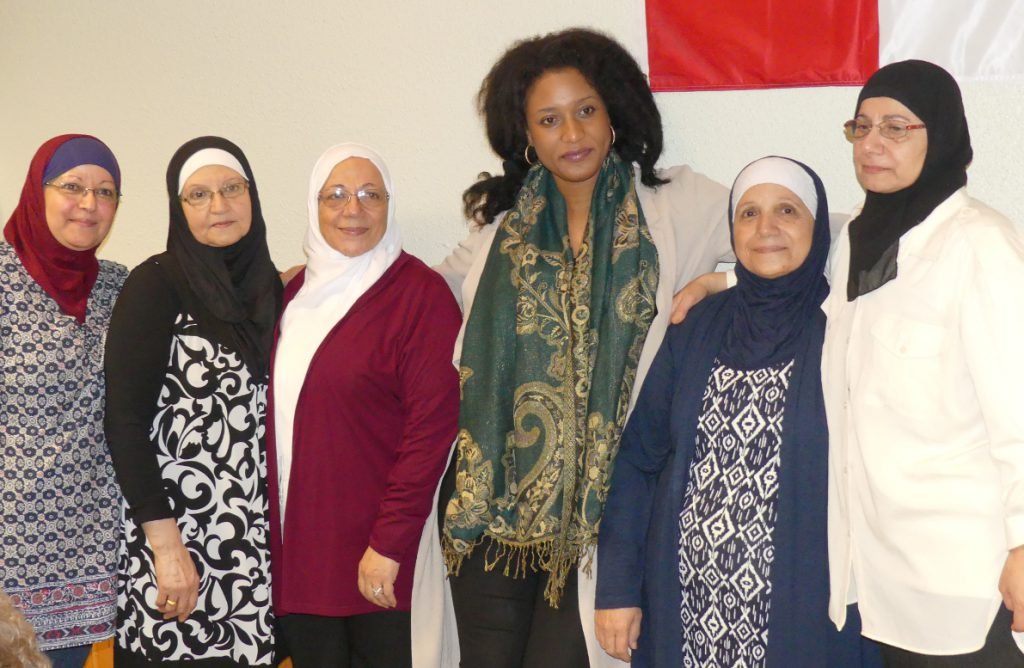 Harmony Koiter, member of the North Stormont Coalition for Refugee Support, delivers a slew of thank-you’s at the conclusion of the successful fundraiser Lebanese dinner that drew about 260 people to the upstairs hall at the North Stormont Arena, Saturday night, March 4, in Finch. The initiative aims to bring a Syrian refugee family — already identified and visited in person in Lebanon — to the area several months from now.

Below, a clip of the preparations before the dinner began.