Features of the day range from a highly anticipated appearance of the CFL Grey Cup, to a cookie contest by show insiders, to the debut of a new “souvenir barn” OVFS merchandise kiosk.

“It’s going to be an action-packed day…. It’ll be equally action-packed on the two following days (Wednesday and Thursday),” said OVFS General Manager Tom Van Dusen, ensconced at the EY Centre site at the outset of the milestone show.

Doors open at 9 a.m., but the pomp-and-circumstance kick-off goes ahead noon at the Ottawa Valley Seed Growers Association’s flagship booth. A dozen past presidents will be piped in to raise the flag over the Seed Show Court of Honour.
Catch the Grey Cup at Kubota Canada Booth 615 — scheduled 10 a.m. to noon today (Tuesday, March 14).
The oatmeal cookie contest is judged at 1 p.m. in the lobby outside Hall A, just as the Ottawa Valley Old Time Fiddling show begins inside that room.
Hall A also serves as the venue for this evening’s exhibitors-only reception, which begins after the show doors close at 5 p.m.
The frugal and the tech savvy should also appreciate the return of free parking at the 2017 OVFS, and free wifi inside the EY Centre.

And be sure to check out the special 90th anniversary OVFS quilt produced by volunteers with material from Flair with Fabrics in Chesterville, sometime during the course of the show. “We have a quilt that was put together by a lot of Eastern Ontario quilters, under the direction of Nancy Grundy who is on our board. And that’s got a special … 90th theme. That quilt is on display here during the show, and it’ll be auctioned off on Thursday during the annual Pedigreed Seed Sale, with all the proceeds going to the Children’s Hospital of Eastern Ontario,” said Van Dusen.

In the clip below, Van Dusen speaks with Nation Valley News in the lobby of the show venue, the EY Centre. 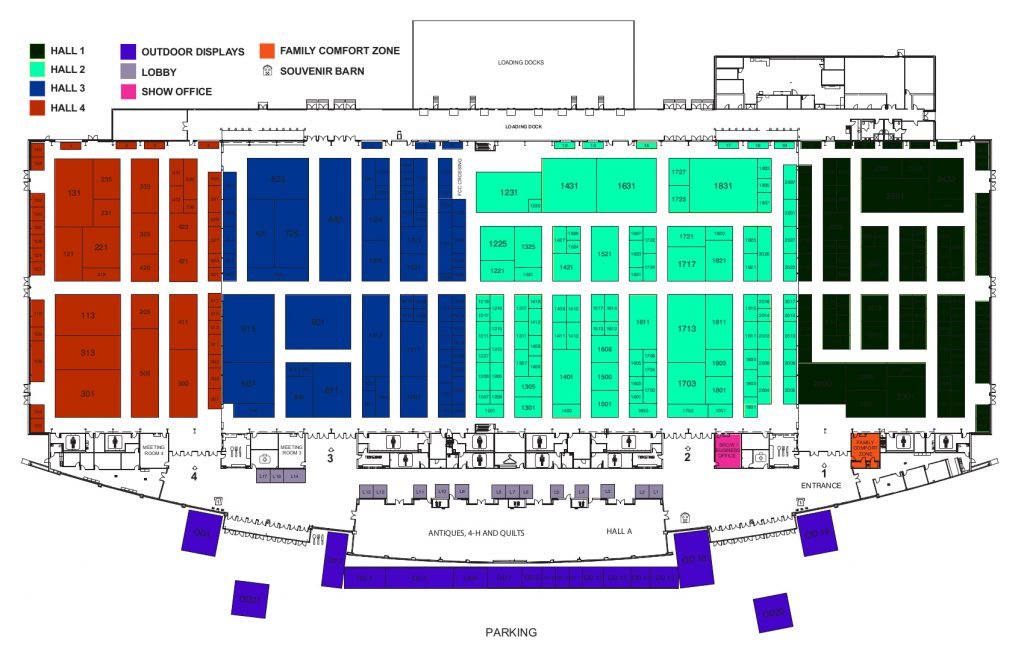 The floor plan for the 2017 Ottawa Valley Farm Show.