When the gavel came down to conclude a dramatic auction for the featured quilt commemorating the 90th anniversary of the Ottawa Valley Farm Show, Rose Stewart (second from left) and Dave Stewart (behind) emerged as owners of the handiwork with a bid of $7,600. From right are Brandy McCarey (sales and marketing manager for Speare Seeds, sponsor of the quilt), along with quilters Kathy Hardy, Donna Saddler, Pauline Clarke, quilter and organizer Nancy Grundy and quilter and supplier of material Ruth Liscumb. At far left is another quilter, Lana Dean. Zandbergen photo, Nation Valley News 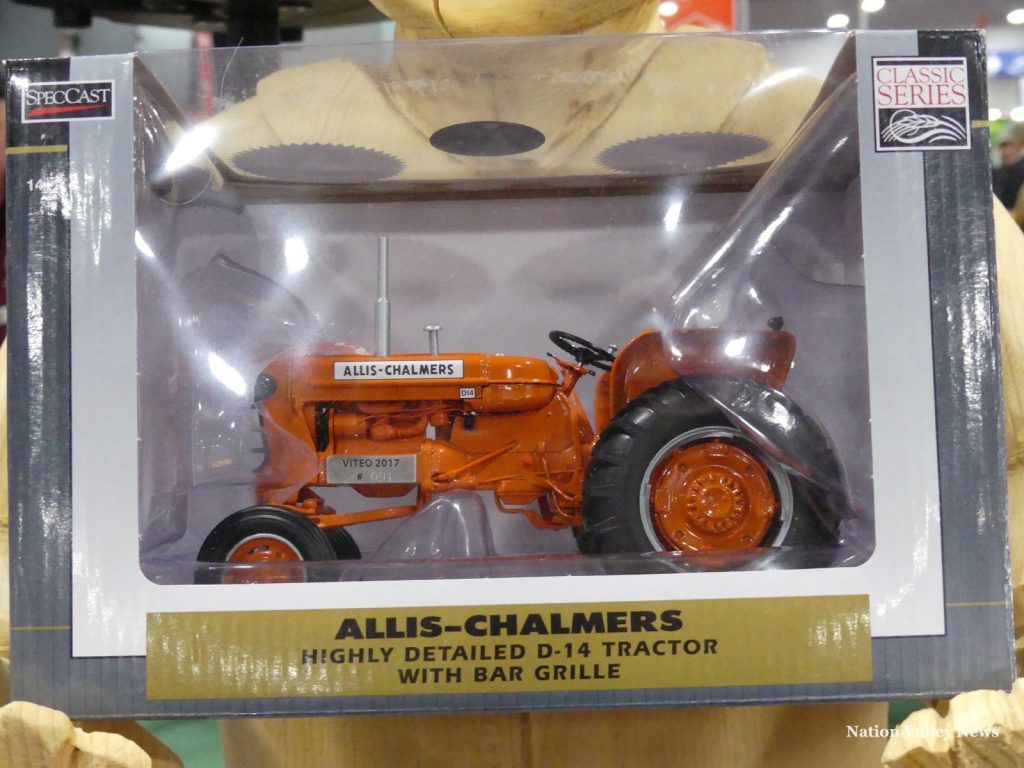 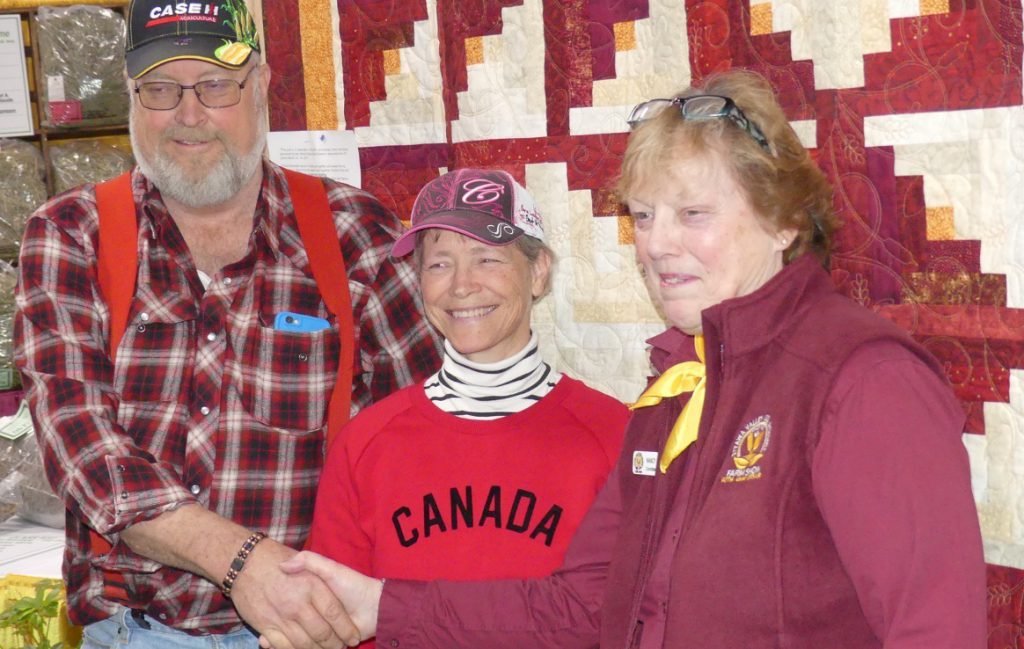 Rose (centre) and Dave Stewart are congratulated by Nancy Grundy, who organized the quilt’s production on behalf of the Ottawa Valley Seed Growers’ Association. Zandbergen photo

Rose and Dave Stewart prevailed in a good-natured bidding war with Ottawa Valley Seed Growers’ Assocation Secretary Arlene Ross, as the Morewood couple captured the anniversary-edition quilt with a whopping offer of $7,600 when auctioneer John Joynt’s gavel came down.

The contest between Rose Stewart and Ross was so close and exciting, the volunteer quilters behind the original agreed to make a similar piece for the losing bidder in return for her price — thus netting an additional $7,500 for the charitable cause.

Vintage iron enthusiast George Nesbitt was the last bidder standing when he ponied up $1,500 for the limited edition model tractor, number one in the production series, which he had himself donated. Later, one of the OSVGA’s directors, Barry Dean, announced to the crowd that Nesbitt was upping his actual price to $4,500 for the replica — a full-size version of which also stood in the lobby of the EY Center. 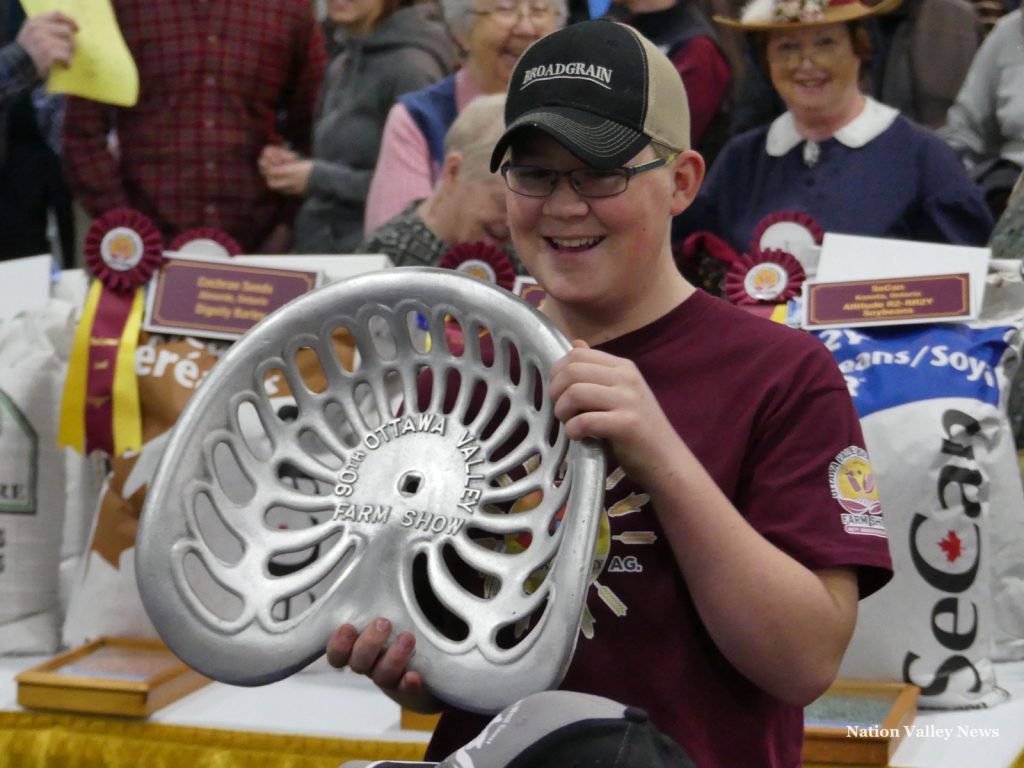 A student assistant with the auction shows off the cast aluminum tractor seat on the auction block. Zandbergen photo, Nation Valley News

When all was said and done, the 19 donated items auctioned off at the March 16 sale — mostly seed — raked in over $18,000, putting the event’s lifetime tally at approximately $150,000 raised to date for the Children’s Hospital of Eastern Ontario.

At 10,711 people, attendance was down from last year’s 11,329, “a decrease almost entirely attributable to the weather,” observed OVFS general manager Tom Van Dusen, but still within the 10,000 to 12,000 range organizers anticipate each year.

“We had the best third day ever during my 17 years as manager,” added Van Dusen, “with a huge surge of people who didn’t make in Day 1 or 2, putting heavy pressure on parking at one point. As we always do, we got most of our people who seldom miss the show. All you have to do is tell them the date.” 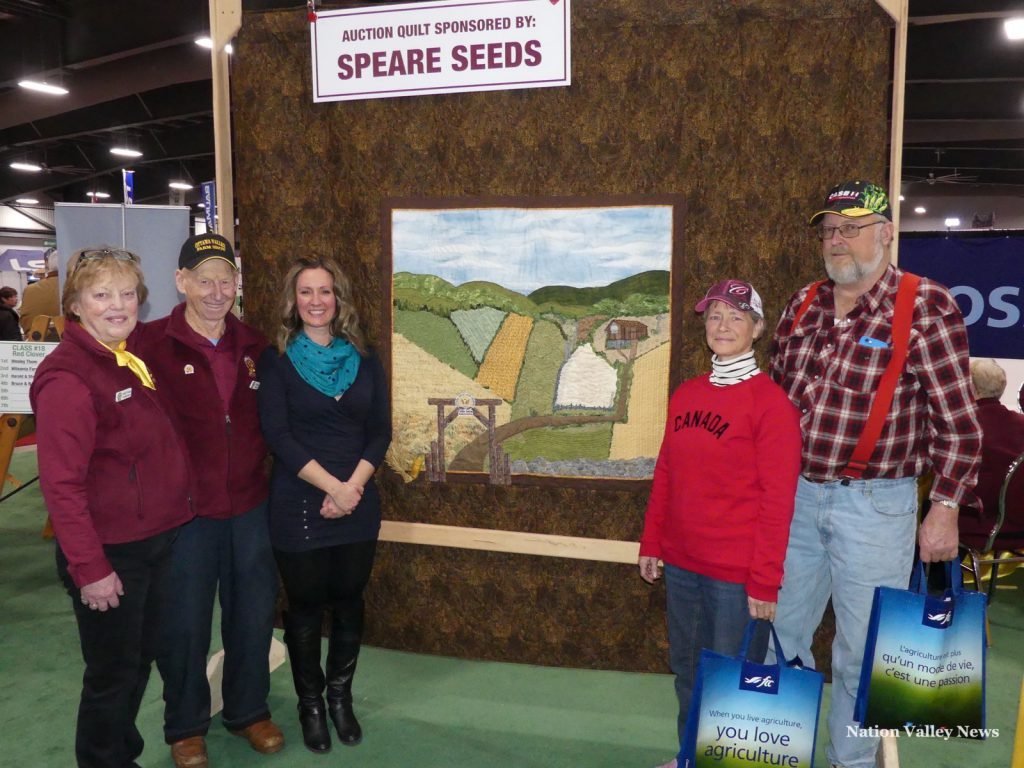 Below, some scenes of the 2017 Ottawa Valley Farm Show.