The Dundas Federation of Agriculture honoured its first five inductees into the new Dundas County Agricultural Hall of Fame on Saturday: Gordon Johnson and his late wife Marilyn Johnson, as well as Martin Schneckenburger (second from left), Norm Tinkler and the late Alvin Runnalls. In addition to his own recognition, Gordon Johnson (left) also picked up his wife's award on her behalf; Dawn Runnalls (right) received the award on behalf of her late husband; and Brian Tinkler (third from left) collected the crystal plaque on behalf of his father, Norm, who was unable to attend that evening. Nation Valley News 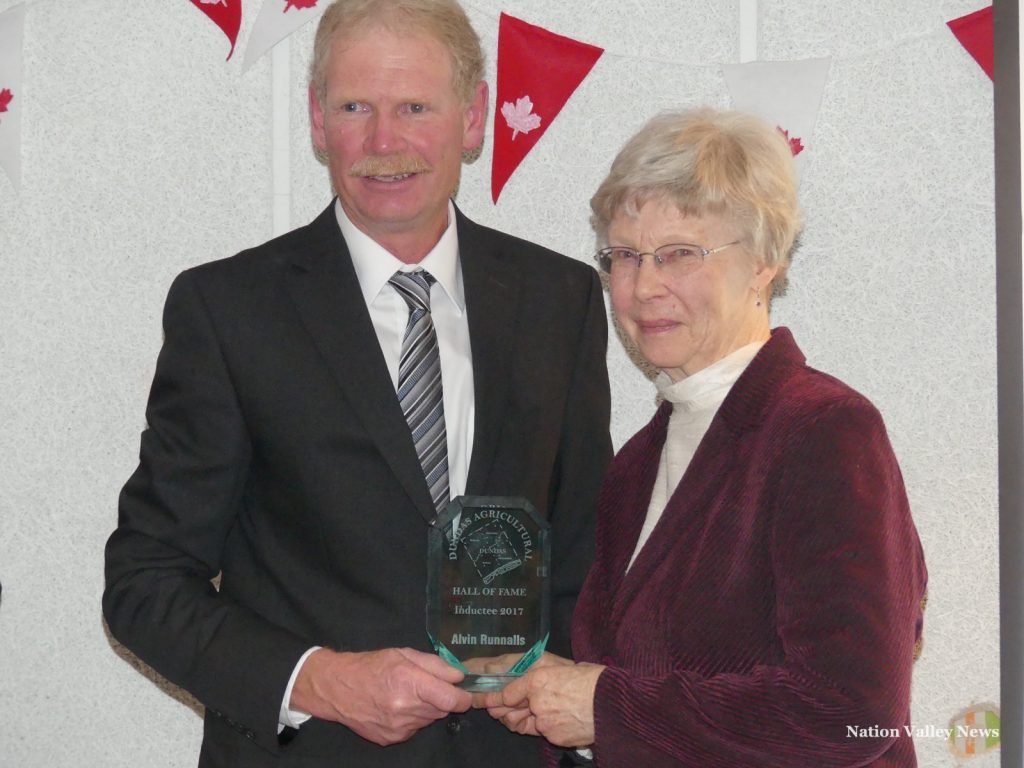 WINCHESTER — Dundas County’s farming community honoured its bright lights as the first inductions to a new agricultural hall of fame took place at the Joel Steele Centere on Saturday night.

Five individuals — two deceased — were recognized for their contributions to the sector at the highlight ceremony coinciding with the biennial Dundas Farmers’ Gala.

The late Alvin Runnalls and the late Marilyn Johnson, along with three of their contemporaries — Gordon Johnson, Martin Schneckenburger and Norm Tinkler — received the honour in front of a banquet crowd of more than 250. They or their surrogates also collected provincial and federal scrolls respectively delivered by MPP Jim McDonell and MP Guy Lauzon. 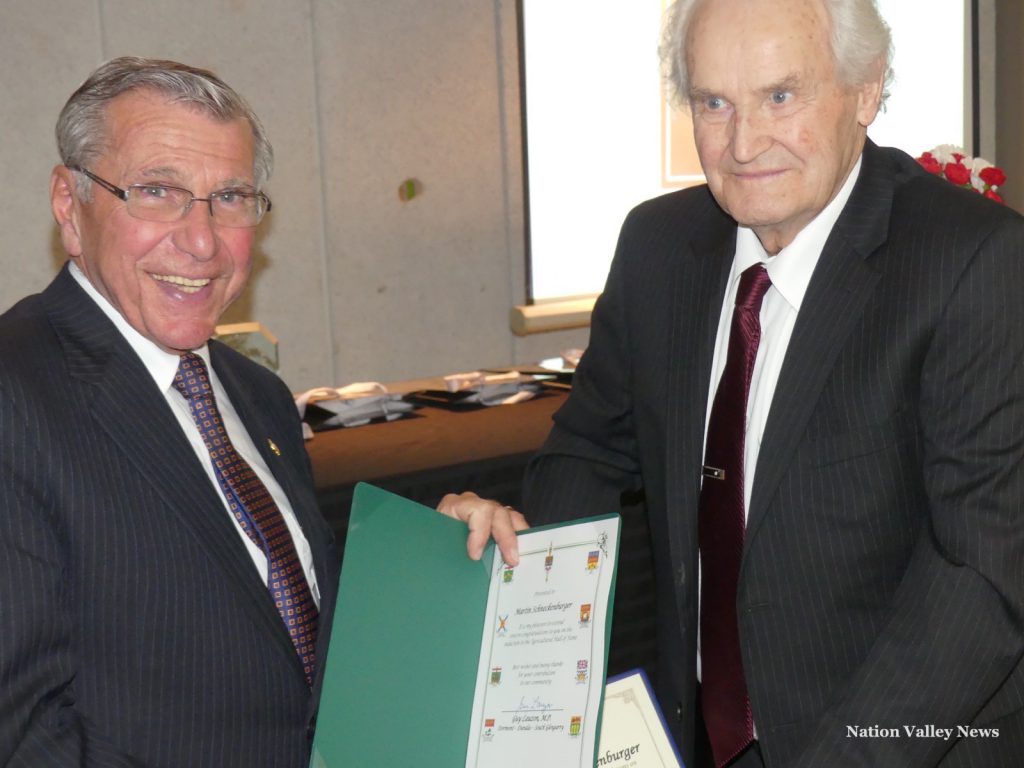 Establishing a Dundas County Agricultural Hall of Fame “waited a long time to become reality,” said Jackie Kelly-Pemberton, recent longtime president (now past president) of the Dundas Federation of Agriculture and head of the Gala organizing committee. A topic of discussion predating and extending through her 13-year presidency, the respective 2015 and 2016 deaths of Johnson and Runnalls “jolted us into getting it done,” she acknowledged. “As the saying goes, ‘Better late than never.’”

Runnalls, a former longtime municipal politician and North Dundas mayor who held a number of DFA leadership positions, discussed the subject “with regularity,” Kelly-Pemberton recalled. “It is fitting that he is one of the five inductees into the Dundas Agricultural Hall of Fame.”

His wife accepted the crystal plaque that accompanies the new honour on his behalf. “If Alvin were here, I’m sure he would be … thrilled,” said Dawn Runnalls. “He felt for many years that we should have it [a Hall of Fame] in Dundas County. Just because we were a small county didn’t mean to say we couldn’t do some of the things that some of the larger counties did. And for him to be a recipient, I’m not sure you can believe it, but we’re very proud of him, and we thank you very much.”

Gordon Johnson thanked the Chesterville Fair Board and the Dundas Milk Committee for respectively nominating his late wife, Marilyn, and himself. “And to the selection committee for choosing both Marilyn and myself for this nomination.”

“I’m at a loss for words, truly humbled and very, very grateful. So thank you very, very, very much,” he said, while collecting his own plaque.

Johnson betrayed somewhat more emotion when receiving the specific award for his wife. “I know if Marilyn was here tonight, she’d be tickled to death,” he said, momentarily going silent before chronicling her broad involvement in the community “from the day we moved into this county in 1973.”

“I could go on and on. But thank you, thank you very, very much for recognizing Marilyn tonight.”

Martin Schneckenburger of Morrisburg expressed thanks to his nominators, adding it was “a great honour” to be inducted. “I would also like to thank my family very much, with me being away so often; I had to go away from the farm,” explained Schneckenburger, a founder of the Ontario Corn Producers’ Association among other high-level leadership positions within Ontario’s agricultural community. “Especially my wife … maybe she should be up here and not me,” he quipped.

Brian and Patty Tinkler picked up the award on behalf of Norm Tinkler. The honoree wanted to receive it in person but was unable to attend that evening, Kelly-Pemberton reported.

“I’m pretty sure he’d be glad to get this,” said Brian Tinkler, speaking at the podium on his father’s behalf. “I feel that, personally, he has earned that…. I thank everybody.”

The group honoured March 25 arose out of seven nominations for the new Hall. But organizers hope to see re-nominations of those that didn’t make this year’s list, Kelly-Pemberton said, to “continue a tradition of recognizing our past and our present and our future leaders.”

MP Guy Lauzon and MPP Jim McDonell also attended to hand over respective federal and provincial scrolls to the recipients.

New DFA President Steven Byvelds of South Dundas — elected to the position March 8 after his predecessor opted not to run — thanked Kelly-Pemberton “for all that she has done.”

A local crop farmer with roots in a number of organizations — as well as a former South Dundas mayor — Byvelds conceded the amount of correspondence received in his new role “is probably more work than I thought, but that’s OK. She set the pattern and now I have to step up and do that as your new DFA president.”

Kelly-Pemberton read aloud the accomplishments of the recipients: 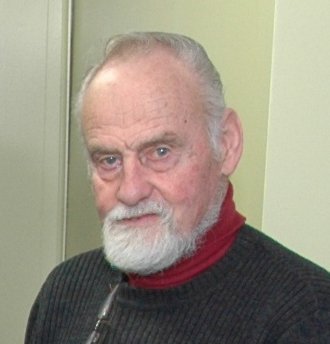 Cited for his “vast” contribution to the local agricultural community, the recipient and his wife and their two children moved to Dundas in 1973. “And we immediately we saw the benefit of his leadership,” Kelly-Pemberton said of Runnalls, whose 40-plus years of DFA involvement placed him in the roles of VP, President and OFA director (11 years), DSCIA member, Member of The Environmental Plan review committee, Recipient of the Eric Casselman Award, 4H leader, and Dundas Cattleman’s member.

She added that Runnalls was “always willing in to pitch in to meet with our politicians, or whatever that needed to be done. That included organizing rallies as that was one of the first events we worked together on at Queens park.

“He was a strong supporter of grassroots involvement and voice when OFA was going through restructuring. Alvin’s background and his business was in Agriculture his list of Credits for contributing to the  broader community is also phenomenal with more than a dozen major organizations from Hospital to food Municipal government to the theatre, Conservation authority, the church Heart & Stroke, library  and many, many more.” 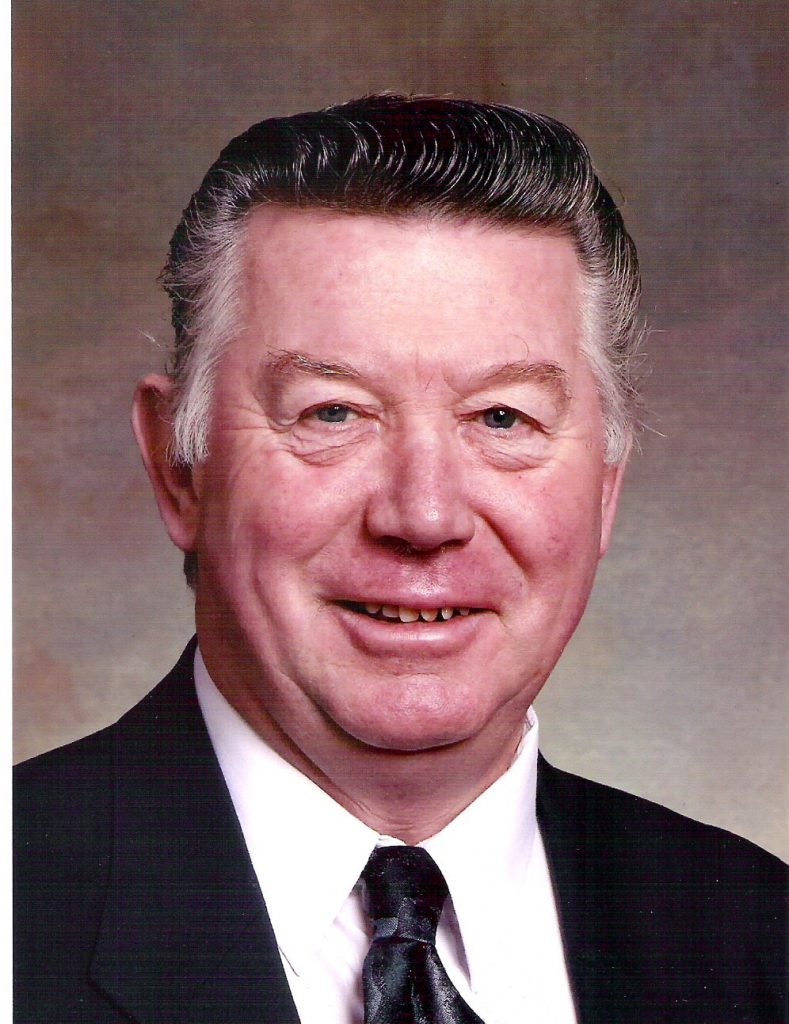 “From 1965-1973 Gord and Marilyn owned a hobby farm near Ashton, Ontario, where they raised beef cattle until they purchased their current dairy farm.

“Gord, along with his wife Marilyn and two small children, purchased their farm in Chesterville in 1973. The farm was originally set up for 30 cows so in 1975 they decided to build a barn to grow the operation to a 60-cow herd. The farm is now run by Chris, his wife Leslie, their youngest daughter Ashley, as well as one hired man. Gord still feeds the calves and fixes the equipment

“Contributions to the agricultural community outside of Dundas County include: Dairy Farmers of Ontario Board of Directors for Region 2 (Stormont, Dundas, Ottawa/Carleton) from 1994-2006.

“Chair of the Eastern Ontario Milk Producers Committee (responsible for the Promotional Activities for 10 Eastern Counties).

“Through his position on the DFO Board, Gord also in 2002 became a Board Member of the Agricultural Adaptation Council where he also sat on the executive  — and was on the Council until 2007. He also was the DFO Board member representative at the provincial level of the Farm Safety Council as well as sat on the Human Resources Committee. He received the Eastern Ontario Soil and Crop Award of Merit 1989.” 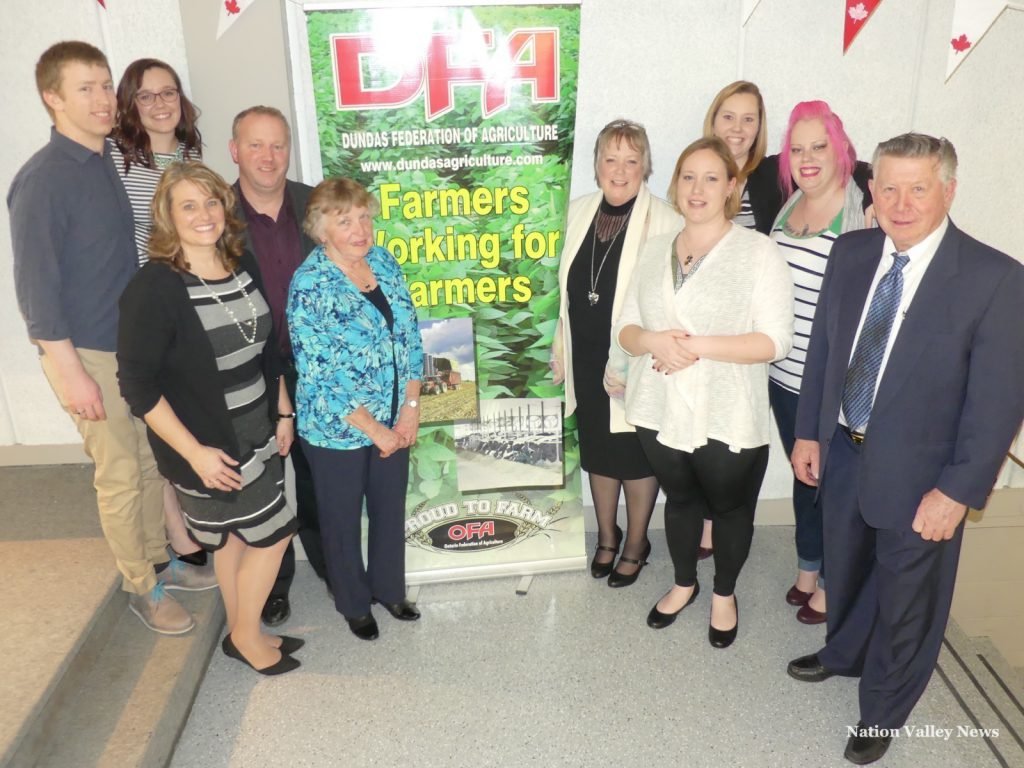 Members of the Johnson family watched as their father, grandfather (and brother) Gord (right) was inducted, along with late wife Marilyn. Zandbergen photo, Nation Valley News 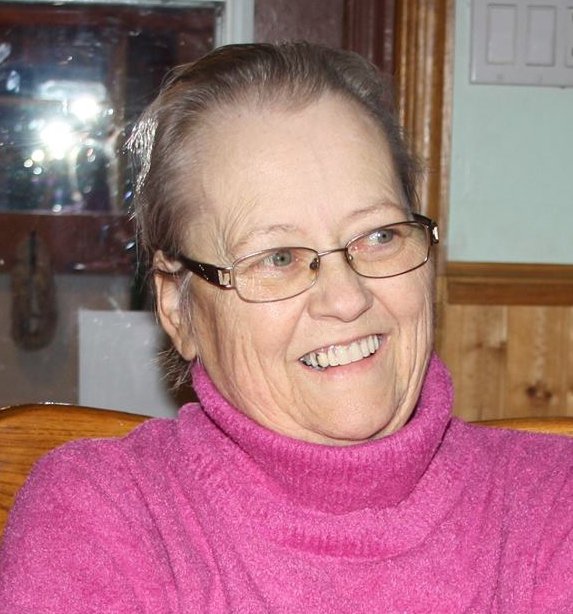 Kelly-Pemberton listed the recipient’s numerous contributions to the agricultural community in Dundas County, including membership in the Chesterville & District Agricultural Society “from at least” 1975 through 2009. With the Society, she served as President of the Ladies’ Division in 1988 and was a longtime director, homecraft secretary and secretary of the society itself.

Johnson was a grassroots member of the WSA – Women for the Survival of Agriculture — since the group’s 1975 inception, designed their logo, served as the WSA newsletter editor, along with “too many activities to mention.” First begun in Dundas County,  the organization grew beyond the county “and was instrumental in having women recognized by the law as equal partners in the farm business.

With the Dundas Federation of Agriculture, she was “one of the first DFA delegates to attend the OFA Convention” and “served as secretary/treasurer for 15 years.”

She also brought agriculture to the classroom, Kelly-Pemberton said, as “an organizer of .. interactive educational events in the schools, and then as an out-of-school event when it became an issue of ‘fitting in with the curriculum.’”

Marilyn Johnson was also involved with the OFWN — Ontario Farm Women Network — a group dedicated to motivating farm women to take an active role in the decision-making process, and with WRED – Women and Rural Economic Development.

In other contributions, the recipient “served as secretary/treasurer of Ye Olde Bargain Shoppe in Chesterville for approximately 20 years, and got involved with Girl Guides of Canada in 1971, starting in the Ashton area and continuing in Chesterville for many, many years. She was a member of the 2nd Prescott Trefoil Guild, where she said adults get to act like kids again.” 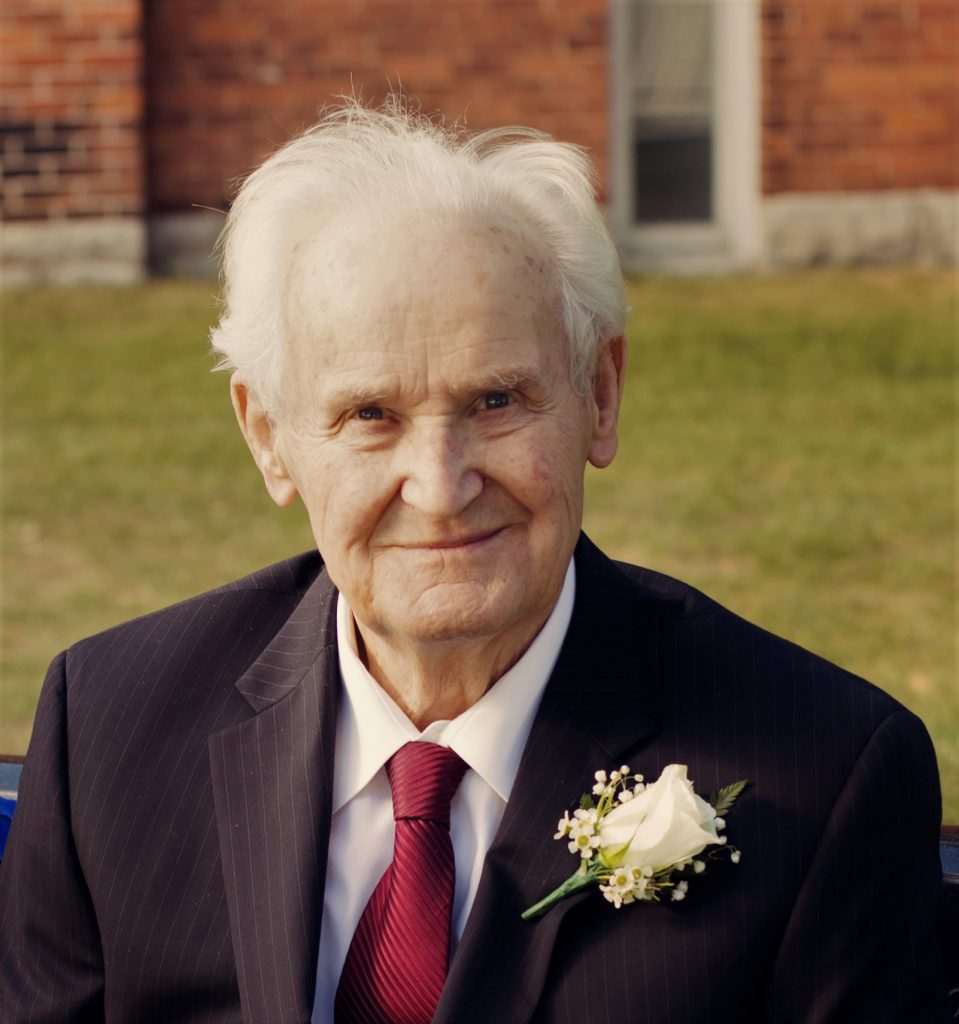 “An agricultural pioneer with a lifetime of agricultural achievements, in 1956 Martin and his wife Evelyn purchased the farm in South Dundas —160 acres and a Jersey herd in which he was recognized for improving the breed through production testing type classification disease eradication and co-operation with other breeders and received The Canadian Jersey club certification of recognition every year from 1962-1969.”

“In 1972 –liquidated the Jersey herd and went into beef feedlot finishing 40 head annually at this time succession was in process and the original farm is home base for the Schneckenburger Farming Enterprise; 1960 – Award of merit from Hogg & Lyte –Dundas Pasture competition; 1967– DSCIA farmer of the year; involved with the DFA and served President and director for 10 years; 1977 member of the Cattleman’s association recognized for promoting improvement in the production of beef cattle in Dundas; 1970-Farm financial Crisis martin served as Chair of the Ontario Family Farm Interest reduction Review Appeal Board-to set up programs to reduce interest rates for farmers to remain viable; late 70’s served as vice chair of the Ontario crop insurance board; 1979 Award of Merit  Eastern OSCIA for his outstanding contributions to general welfare if Agriculture within his community; 1983 Martin Represented our area during the setup of the Ontario Corn Producers; 1984-5 served as vice-president, following which he served as treasurer until his retirement in 1991.”

In 1993, the corn producers gave Schneckenburger a certificate of appreciation “for his selfless dedication.” 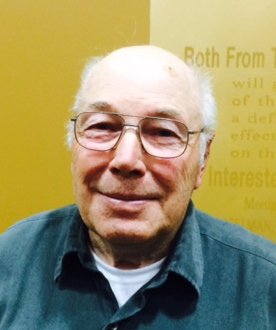 “Norm Tinkler with his wife Doris and family operate a dairy and cash crop operation just west of Winchester Springs. In addition to his own farm, Norm managed a Pride Seeds dealership for many years and also does custom work.

“Norm has been a director for Dundas Soil and Crop Improvement Association for many years, including holding the position of President in 1990-1991.

“In 1989, DSCIA recognized him for his accomplishments by giving him the Farmer of the Year Award. The award is presented to outstanding farmers in Dundas County. These farmers exhibit leadership and innovation in crop production and/or animal husbandry, while being active in their farm related organizations. These activities can vary from education of the youth and public, to helping fellow farmers adopt new technologies, to being environmentally sustainable.”