Frank Heerkens and the wood-pellet boiler at On the Bend Sugar Shack, where sap from Kemptville Agriforestry Centre is being turned into syrup for the first time in years. Zandbergen photo, Nation Valley News 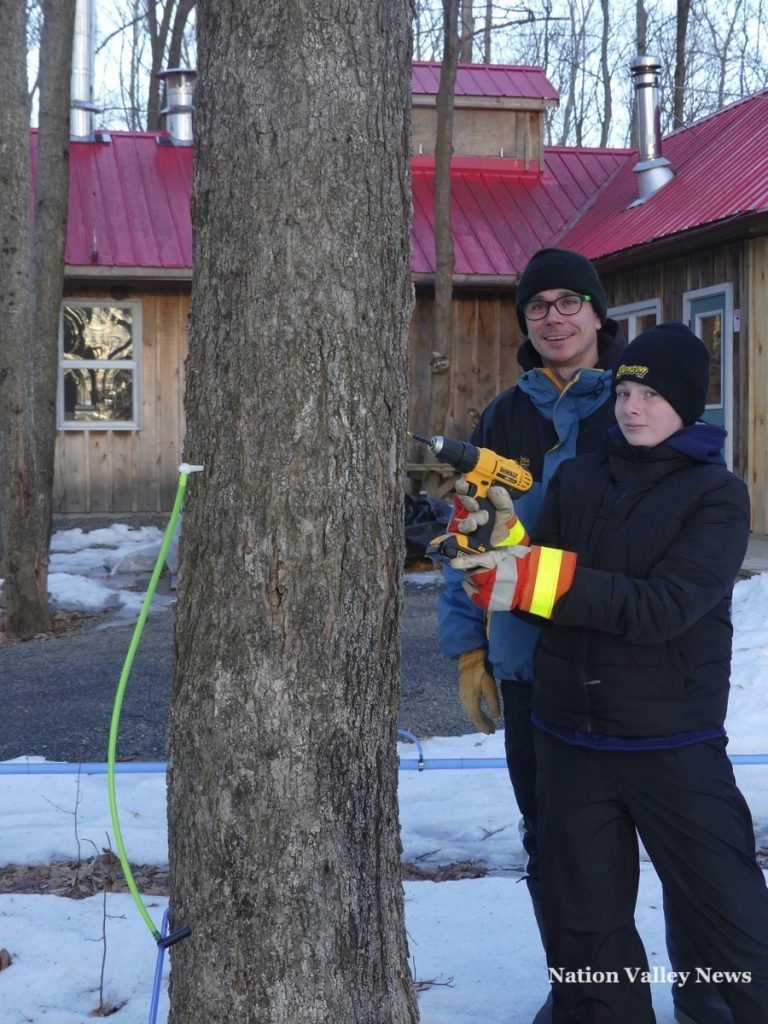 Trevor Gallinger, son of On the Bend Sugar Shack co-owner Gary Gallinger, and Madison Chretien, 13, granddaughter of co-owner Frank Heerkens, on the final day of drilling taps, in late February, at the South Dundas operation that is also taking in sap from Kemptville’s Agriforestry Centre. Zandbergen photo, Nation Valley News 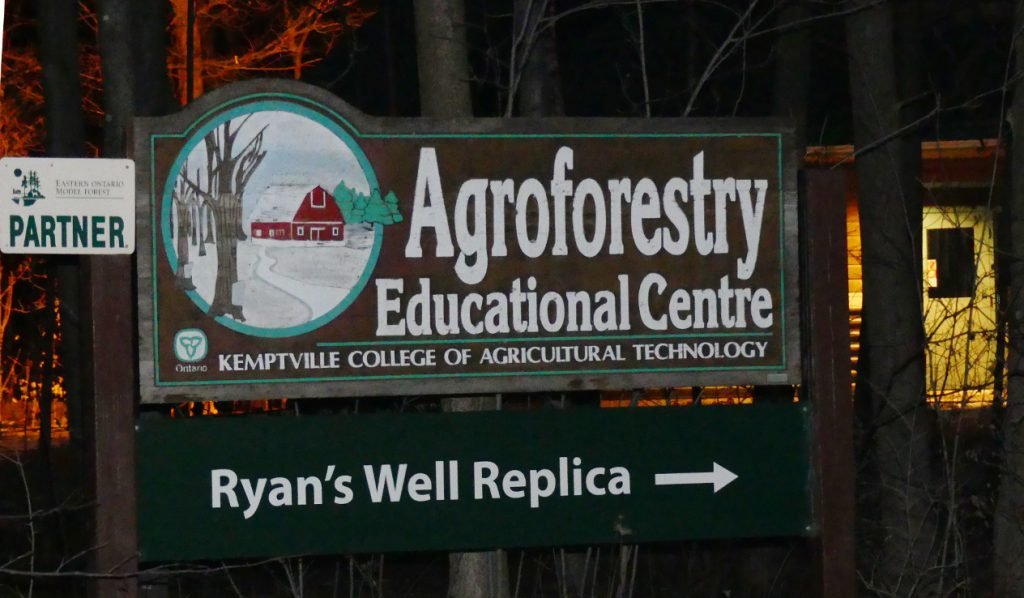 The sign outside the idled Agroforestry Educational Centre in Kemptville — whose sap is being drawn to South Dundas. Zandbergen photo, Nation Valley News 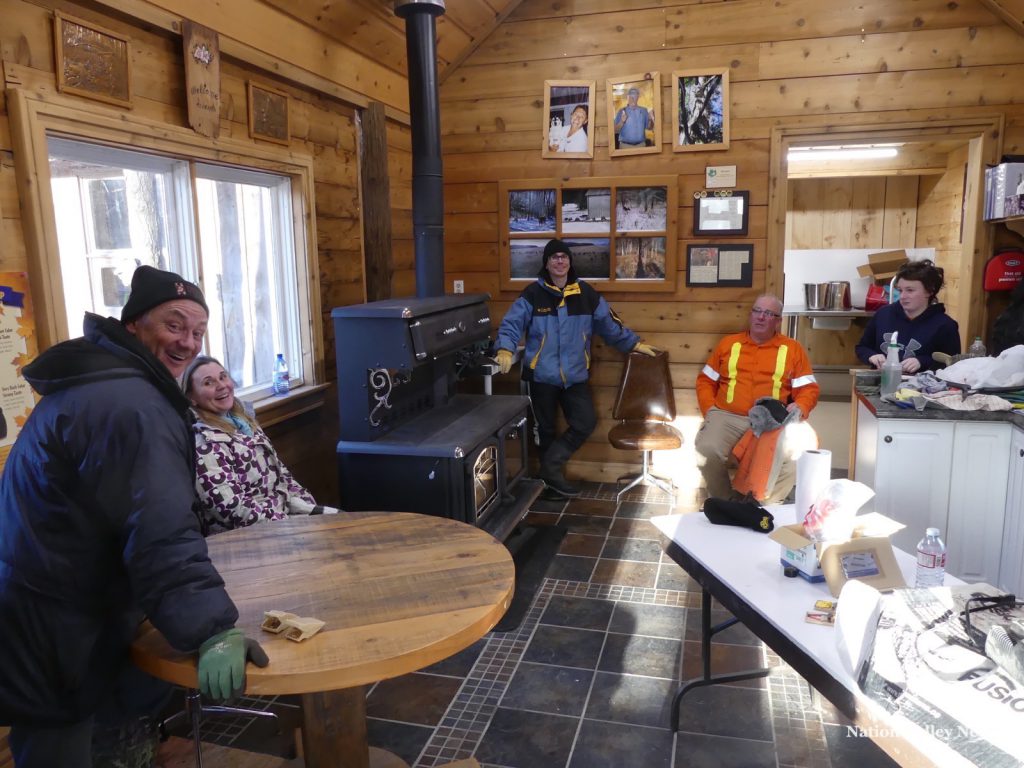 CHESTERVILLE — A modest agricultural revival is quietly underway at the former University of Guelph campus in Kemptville — but it’s a sweet one.

Idled by the ag school’s controversial pull-out from the Kemptville Campus, the sugarbush at the former college’s Agroforestry Educational Centre is being tapped again to produce maple syrup for the first time in three years.

The pancake house and boiling operations at the Bedell Rd. facility remain in mothballs. But the vacuum lines are back up and drawing sap from the trees.

Chesterville-area businessman Frank Heerkens hauls the natural elixir to his ‘On the Bend Sugar Shack’ operation 50 km away, aboard 1,000-litre plastic ‘totes’ affixed to a trailer.  In the northeast corner of South Dundas, he and partners Gary and Sheri Gallinger turn the former Kemptville Campus sap into syrup within a hulking chrome boiler that would be the pride of a Peterbilt dealership.

“We’ve got 900 taps in there,” confirmed Heerkens of the Kemptville operation.

Consequently, they’ve almost doubled their syrup output as a result of the new arrangement.

While unusual in Ontario, transporting sap offsite to another operator’s boiler is quite common in Vermont and Quebec, he says, where very large producers may serve as centralized processing facilities for smaller neighbours in their region.

Though on a smaller scale, Heerkens’ nicely appointed sugar shack clearly has the capacity to handle much more than the 1,000 taps at On the Bend. In addition to that shiny truck-like boiler — festooned with as much chrome as the nicest tractor trailer — the ‘shack’ houses a new, oversized reverse osmosis machine.

They’re taking the sap from Kemptville under agreement with the University of Guelph.

“There is a new agreement for a producer to collect sap there,” university spokesperson Kevin Gonsalves confirmed for Nation Valley News, adding it’s been at least three years since those trees were last tapped.

Brian Barkley, a past president of the Ontario Maple Syrup Producers’ Association (OMSPA), was happy to see Heerkens bring the Kemptville sugarbush back into production. “As with every asset, it falls very quickly into disease and disrepair if you don’t use it,” said the Elma resident.

OMPSA put money into revamped equipment at the facility, he pointed out, only to see the university close it down. Ontario still lacks a proper public maple syrup production research facility, he said.

Meanwhile, the 2017 syrup season got off to an intermittent start. Some producers managed to have their equipment up in time for a brief run at the end of February. Swaths of March were lost to production pauses because of prolonged cold. But there was optimism about the coming weeks ahead.

Angela Coleman of Sand Road Sugar Campin in Moose Creek said her operation had produced about 1,000 litres of syrup by the third week of March— about 25 percent of last season’s record total output, with potentially much of the season yet to go. “We’re very optimistic,” she said, noting that even the arrival of a sudden warm spell wouldn’t immediately end production because larger trees would take days to thaw out.

The cold March has “basically reset the season back,” said Barkley, who runs Barkleyvale Farms outside Chesterville. “But we’ve seldom made large amounts of syrup in March,” he pointed out. “I can look back to years where we didn’t make anything until the last week of March … and by the second week of April, generally speaking, things are coming to a close.”

On the Bend Sugar Shack, Barkleyvale Farms and Sand Road Maple Farm are among 10 stops in Maple Weekend, which starts tomorrow.

Barkley said the weekend has helped raise public awareness about a “thriving” maple syrup production in Eastern Ontario and Stormont, Dundas and Glengarry. Many consumers aren’t aware of the number of producers making and selling syrup in their immediate vicinity.