The North Dundas Rockets hosted our annual year end banquet this past Sunday, April 2nd.  I would like to start by thanking the over 80 people who attended; the Chesterville Legion for hosting; The Young family, specifically Colleen, who went to great lengths to cook and set up, Tony Fraser for being the host of the afternoon and finally the North Dundas Community again for its phenomenal support throughout the season and our playoff run.  Going from second last place in 2015-2016 to the league finals this year is something we all should take pride in.

Bryden vanKessel receives his many awards

Bryden is a rare combination of speed, talent and commitment at our level.  The most dominant player in the league who cares about winning.  As the season wore on into the playoffs Bryden was driving back sometimes 10 hours one way to play games for us which clearly speaks to his commitment level to our team.  Having had the opportunity to coach Bryden on two different teams over the past years I can honestly say we were thrilled to have him in a Rockets uniform and are looking forward to having him back next year for another run. 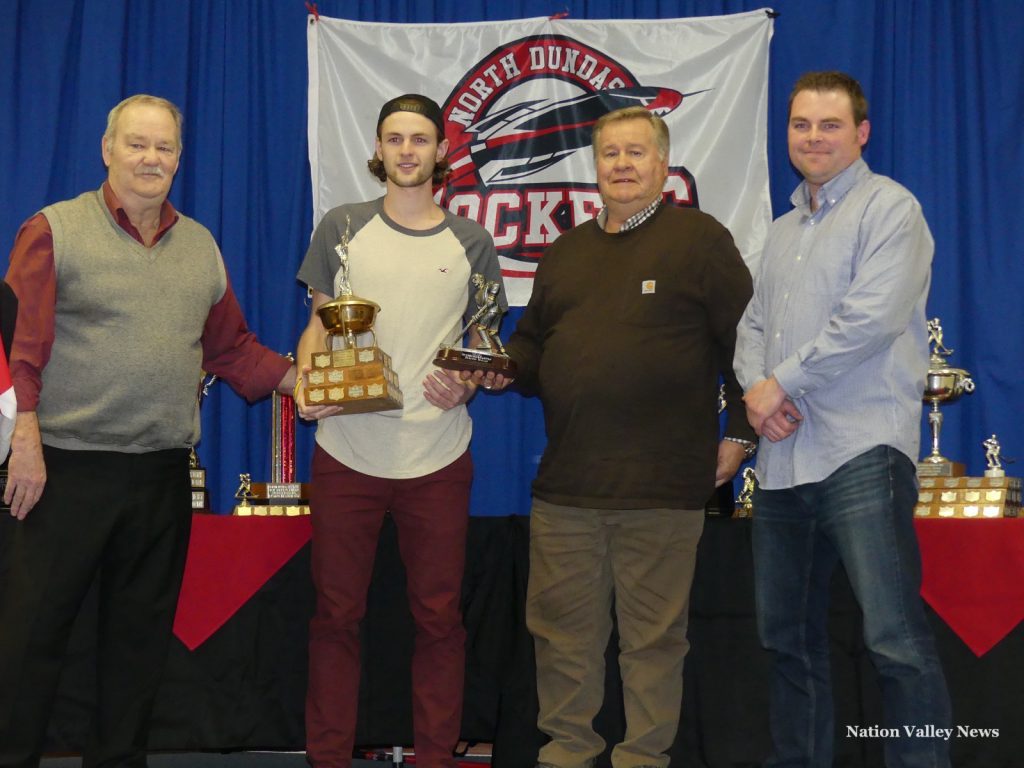 Brandon has been a pleasure to work with over the past two years, the best 200 ft forward I have had on a team at the junior level, an all around complete player.  He was our captain this year, a leader on and off the ice with a great team demeanor and commitment.  He handles himself ‘the right way’ on the ice and was rewarded for his efforts this year.  It’s his last year of junior hockey as a player, but I have a feeling junior hockey will continue for him in some capacity in the near future. 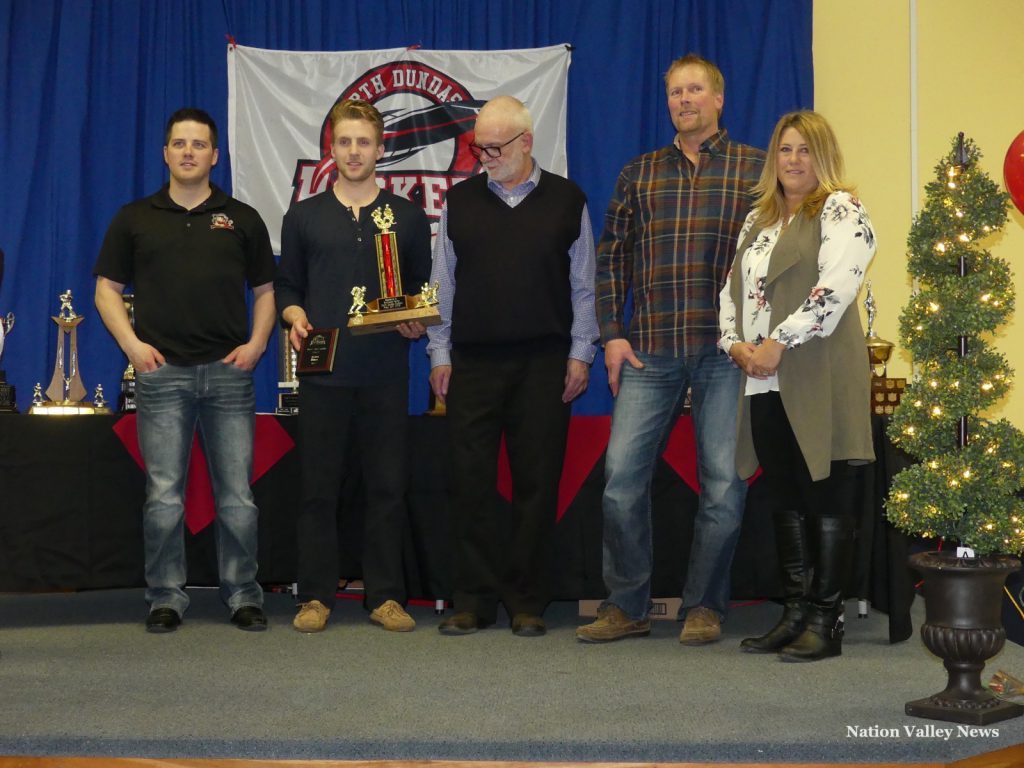 Jason came back to our team this year after spending a couple years away at school; although I was not familiar with him, rumour had it that he was a good goalie.  Turns out, in my opinion as GM, he was the best goalie in our league this year.  Consistently bombarded game in game out, played 30 games of a 32 game schedule, posted 18 wins and was the major factor in our two playoff series wins over Cumberland and Vankleek Hill.  Jason will be assuming his number 1 starting spot in nets for us next year, which automatically gives another chance at a great season. 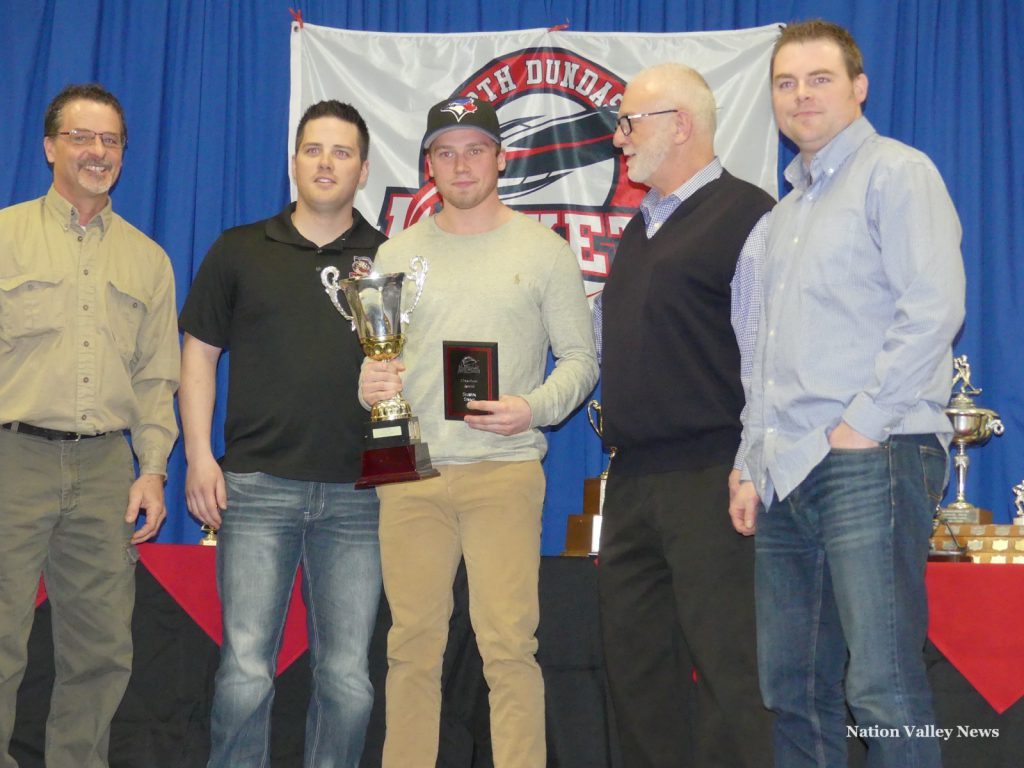 Shawn Simms gets recognized by all the coaches

Shawn came to us from the Winchester Hawks last year, another kid I was familiar with from coaching, and he simply had a hell of a year.  He put together some great scoring streaks, plays the game the way it should be played, doesn’t complain, and shows up to play hard every night or afternoon.  From an organizational standpoint Shawn is a key component of the teams character moving forward and we are looking forward to his return next year. 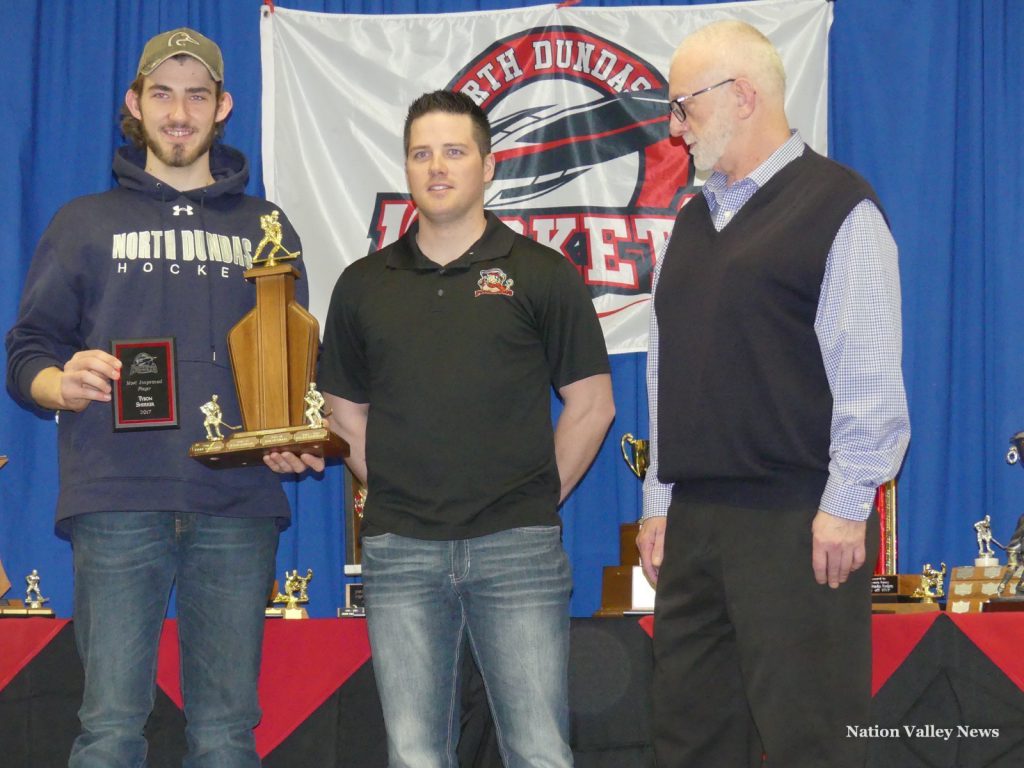 Tyson Sherrer accepts his award for most improved

This was Tyson’s first real full year of junior hockey, a big strong kid with a real big heart.  As the year progressed Tyson improved in all aspects on the ice, decision making, physicality and leadership.  He guy who would defended his teammates, never complained, and worked hard every time he was on the ice.  With his toughness and ability to skate we are looking forward to further development down the road.  A real solid year. 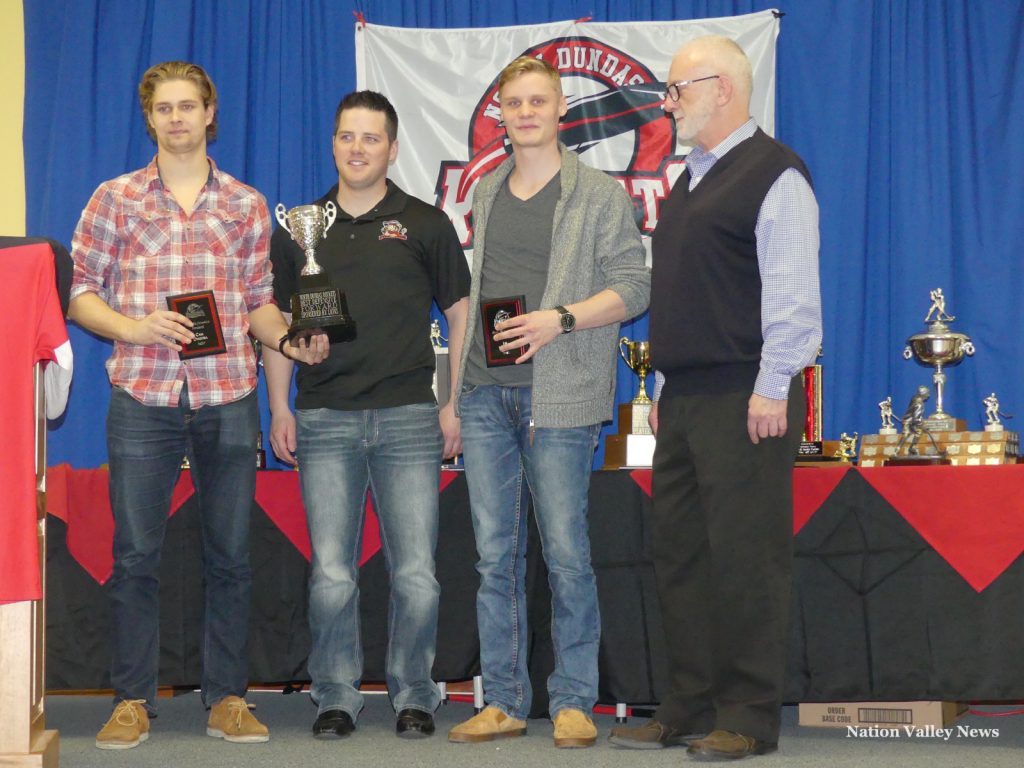 Joe and Cam came to us the second half of the season from Clinton, Ontario and fit in immediately with our team.  Small town kids who had won championships playing for the Exeter Hawks in the past.  These guys brought exactly what we were looking for in the playoffs, a couple of older guys that have won before and know what it takes to do so.  All the little things, back checking, positioning, good feet and sticks are key components of their games.  As a result of signing late in the season, this was their last year of junior hockey and we wish them the best of luck in the future in all their endeavors.

van Kessel Family Award for Volunteer and Executive of the Year:

Robyn Sadler is recognized for his many hours and efforts

I would like to thank the vanKessel family for donating this award on behalf the late Peter van Kessel Sr. who was a key builder,supporter, volunteer and fan in junior C hockey for the North Dundas area over the past 30 years.  I was humbled to receive such an honor and would like to thank the organization, Kevin Byers and Kent Young for choosing me as the recipient.  The year we had takes a lot of hard work from everyone involved not just one person; and on a personal note, it is different not seeing Pete Sr. around the arena at our games or around town, I can only hope he is proud of the year we had, and that he knows that his hard work and dedication over the years has made it possible.

League executives Ian Mcrea, Hubert Seguin and Jeff Moore were also on hand to re-present Bryden van Kessel with the League MVP and Top Defenseman awards as well as Brandon Mullin with the League’s Top Scorer Award for the 2016-2017 season.