WINCHESTER — Hoping to snuff out a proposed half-year prohibition on large open-air fires, farmers brought a burning counterproposal to local politicians in North Dundas this week.

Dundas Federation of Agriculture President Steven Byvelds delivered his organization’s critique of the measure that would disallow large brush-pile fires May 1 through Oct. 31 each year.

Council has been promoting the idea since the Fire Chiefs’ Steering Committee recommended it last month.

A number of factors have played into the proposal. Council has grown weary of summertime smoke complaints, generally corresponding with increased agricultural clear-cutting of recent years.  Large open-air fires generate 911 calls by cellphone-toting passersby and motorists. Many times, the fire proves to be legal and under the farmer’s control. But the admittedly overstretched volunteer fire service in North Dundas — especially pressed for manpower during the summer holidays — must roll trucks and respond to every call, never assuming it’s a controlled burn already known to the department.

Councillors Tony Fraser and Al Armstrong tried to sell DFA members on curtailing brush-pile fires to the six coldest months of the year during an April 5 presentation in Chesterville, but the attendees at that session came out against the proposal after the pair had left the room. 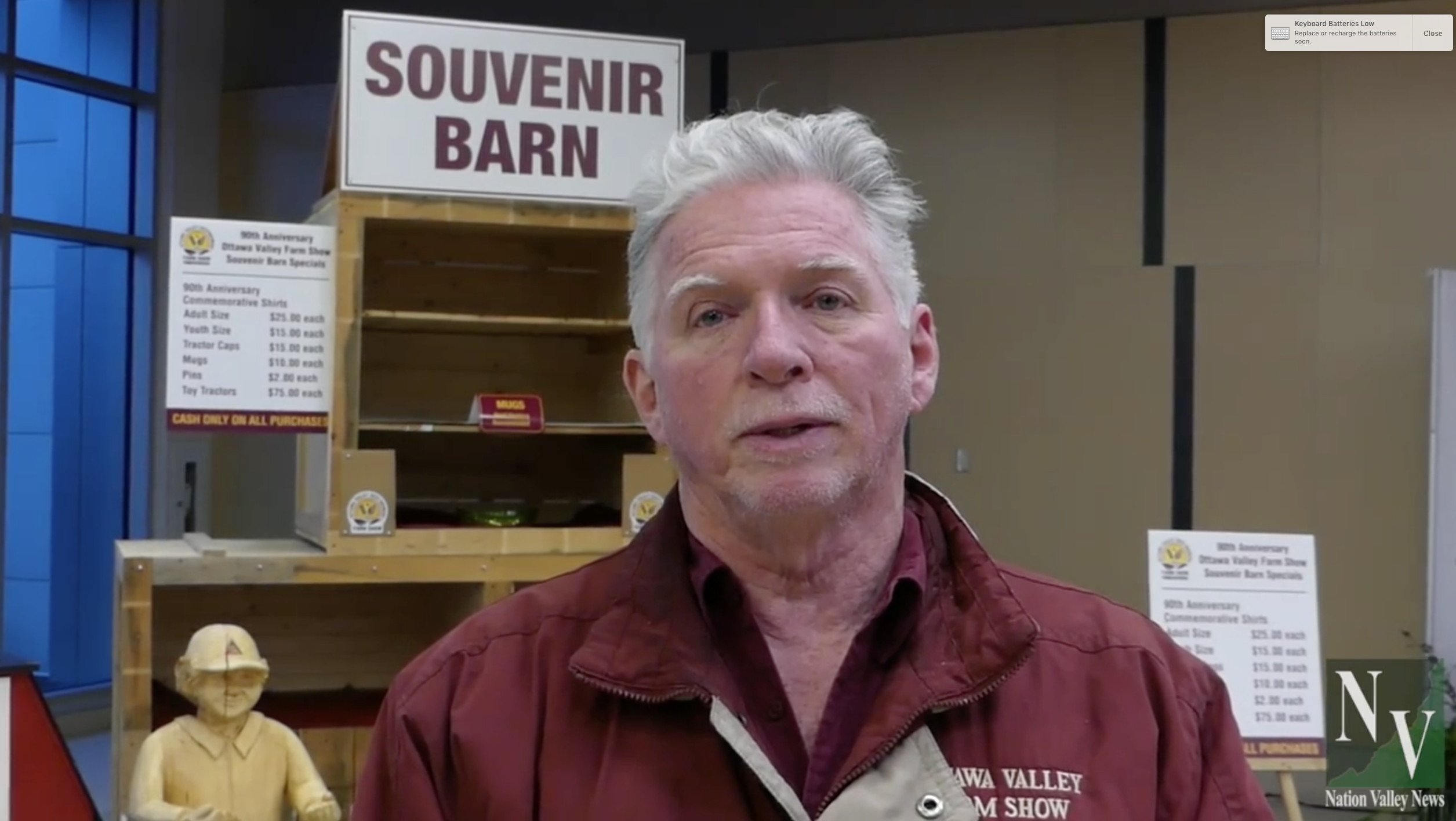 Byvelds reflected that opposition when he approached council in Winchester April 11. A former mayor of neighbouring South Dundas, he started by thanking Fraser and Armstrong for presenting the township’s concerns at the earlier meeting. “Safety is foremost on our minds, too, and we understand manpower is always at a premium,” said the new DFA president, who took over from former long-time president Jackie Kelly-Pemberton in March.

Byvelds called for year-round burning of slash, but within the bounds of a new bylaw with stricter provisions. These included mandatory drying time before setting brush piles alight, notification and distance from neighbours and maximum pile size. The township could enforce such rules with “penalties that make sense,” he said, advising “full cost recovery from those who become problems. I do believe in a ‘free’ first offence but after that the penalty needs to reflect the cost to the municipality.”

Byvelds brought forward a handful of other ideas that arose out of the DFA’s April 5 brainstorming session: reducing public confusion by erecting civic addresses for all vacant farm properties (already identified on paper by their tax-roll numbers); capping the number of daily fires by limiting the number of burn permits issued; and establishing a township Agricultural Advisory Committee.

He also asked that council at least consider rolling back the start date of the otherwise “problematic” November-through-April burning season, suggesting fires begin mid-September or October 1 instead. But he warned that any start date to a shortened season would “come with the challenge that everyone will burn at once since time will be short. This could be a large issue especially since all complaints and containment issues will come all at once.”

Winter fires “just do not work,” he asserted, “as snow and moisture will not allow for a complete burn.”

And while April is included in the proposed burning season, that month “can cause issues with grass fires if it is dry,” he pointed out.

The DFA feels “that banning all fires is not a good solution,” he concluded. “Fires need to happen, and they can, if done right.”

Armstrong, who chairs the Fire Chiefs’ Steering Committee as township fire commissioner, bristled at Byvelds’ use of the term “ban” when describing the chiefs’ proposal.

“It’s not a suggestion of ‘no’ burns, it’s a suggestion of when the burning would be allowed…. We’re not talking about a complete ban…. There’s still six months of the year when it would be a possibility of burning,” said Armstrong.

“It’s not an open fire ban, period,” the councillor repeated. “It’s an open-fire ban during the summer months, just to be a little more clear on what it is that the Steering Committee is suggesting,” added the councillor.

Armstrong later clarified for Nation Valley News that it would not apply to campfires or smaller brush-pile fires created by farmers’ more seasonal clean-up along their fields. He said the language in the proposed bylaw — which council won’t discuss again until May — will need to differentiate between regulated larger fires and smaller ones not subject to the same restrictions.

The proposal comes from the chiefs, not himself as commissioner, he emphasized. “I don’t even vote [at the Fire Chiefs’ Steering Committee],”  Armstrong explained, saying he defers to “the professionals” on such matters. 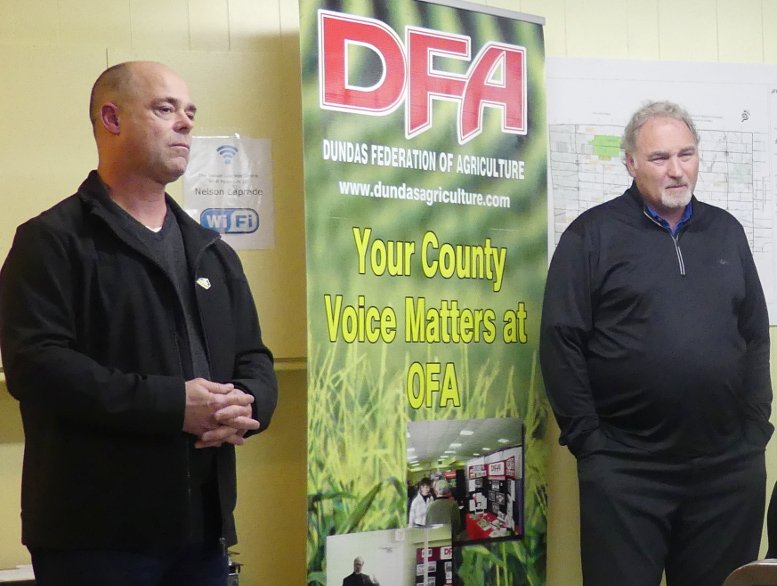 The restriction is “part of a many-pronged approach to alleviate some of the stress on the fire department,” he said, conceding the township’s supply of volunteer firefighters is challenged to deal with call volumes triggered by citizens seeing the smoke of large burns during the warmer months. “They do sacrifice, and we can’t continue expecting too much of them,” said the commissioner of the volunteer force. An increasing number of firefighters work jobs a substantial distance outside of the township, he pointed out, or are extremely busy as self-employed individuals.

In addition, he estimated the required response to a fire call costs taxpayers $2,000 per hour on what may or may not be an actual fire that needs to be fought. But they’re compelled to respond nonetheless.

Councillor Fraser, currently the acting Chief for the Winchester Station, told farmers at the April 5 session they might be surprised at the time spent verifying a legal brush-pile fire is the only fire in a neighbourhood, after firefighters have been called to a scene by someone with a cellphone who has misinterpreted what they see. The caller often gives a nearby civic address to fire dispatch in Ottawa, which may or may not be connected to the actual farmer, muddying the situation for the responding firefighters, according to Fraser.

“So we get a page for that address, and there’s nothing there. But we see your fire in the field, so we roll up to your place and tell you we’ve had a call and we suspect it’s for your fire,” he explained. The firefighters can’t just call dispatch to see if there’s a permit for the fire, then drive away assuming it was the source of the call. They have to talk with the farmer, he said, to ensure there isn’t some other fire raging in the vicinity — or a nearby car accident — requiring their attention. “We have to respond because we don’t know,” he said. “We can’t just say, ‘Aw, don’t worry about that, ‘He’s got a permit.’”

“The information we sometimes get is pretty baffling,” Fraser added, in reply to a question from a DFA member. “Because it is a passerby, and they might have gone half a kilometre down the road, and they call it in. And we have gone in search of lots of things. It doesn’t happen that often, but we do go looking — enough that it would cause you great concern.”

“We’ve had calls where there’s a shed surrounded in low-hanging smoke, and it could be four miles away that the smoke came from. But it’s somebody meaning well who gave a call,” Armstrong chimed in. “And we have two water trucks, two tankers, all these guys show up, and it has nothing to do with it. So now you have to go find it, like, where is this fire?”

A small number of brush-pile fires do get out of hand, however, and Armstrong said it’s hoped that limiting burns to the colder months will cut back on those incidents. The township also believes that wintertime burning, coinciding with closed windows, will reduce public complaints about smoke.