LONG SAULT — The local campaign to prevent the planned removal of high school grades from Rothwell-Osnabruck School had the ear of Ontario’s education minister this week as local politicians from South Stormont pressed the school’s case during a special meeting with Mitzie Hunter at Queen’s Park.

A precursor to the community’s planned formal appeal to the ministry in a bid to overturn the Upper Canada District School Board’s March 23 decision, the face-to-face meeting with Hunter lasted a little more than 45 minutes in Boardroom 212A at the Legislature, according to South Stormont Mayor Jim Bancroft.

“We had almost an hour with her, which was encouraging,” Bancroft told Nation Valley News during a break at the April 12 South Stormont Council meeting, a day after the Toronto visit. However, he conceded the delegation received “absolutely no commitment one way or the other” from the minister.

Bancroft said he repeatedly asked for Hunter’s help to save R-O. The minister’s non-committal response? “I hear you,” he said, reporting her words.

“She made lots of notes, and her right-hand person was certainly listening as well,” he said.

The mayor suggested the intervention of the minister may be the only thing to prevent the UCDSB from carrying out the plan to shift Grade 7 through 12 R-O students to Tagwi Secondary School at this point.

He said they impressed upon her that the UCDSB’s final Building for the Future report contained uncorrected errors about the school’s vacancy rate. “And we repeated that we’re going to be the only community of this size that’s not going to have a high school.”

They also got the minister to look at aerial photos of Tagwi Secondary School and R-O, he said, to contrast the stark difference in population development around the two institutions.

The community has redoubled its effort to save high school education at R-O, following trustees’ controversial 6-5 vote to chop the program as part of an attempt to address 10,000 surplus student spaces at UCDSB schools.

A new petition has garnered hundreds of names since its launch at a Save South Stormont Schools public meeting on April 4, according to the mayor. Council voted this week to waive the hall rental fee for that event.

Bancroft said documentation launching the community’s official request for a ministerial review of the R-O decision will be in Hunter’s hands by an April 23 deadline.

The countervailing push to save R-O comes as trustees approved a plan this week setting up transition teams to carry out 12 approved school closures and consolidations. 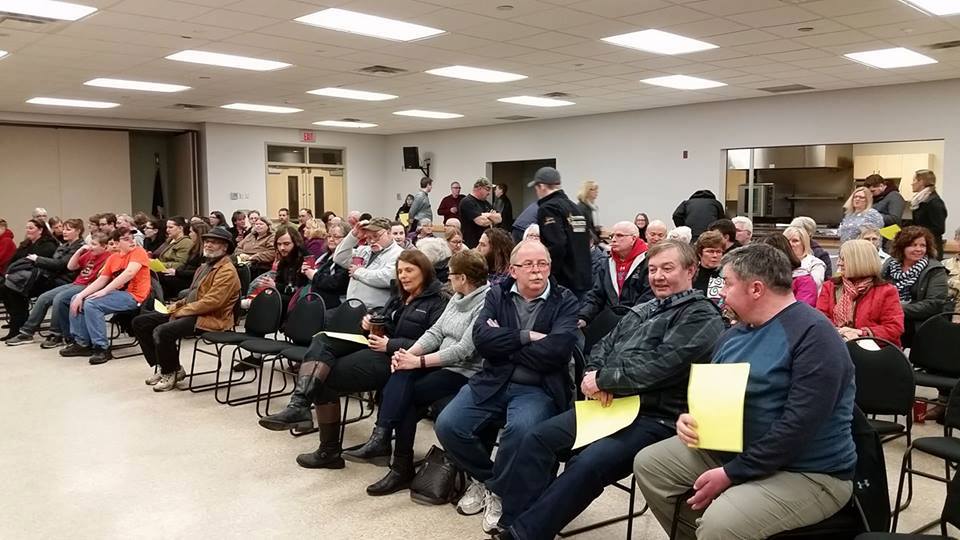 The April 4 Save South Stormont Schools meeting, where R-O supporters regrouped after the unpopular March 23 decision by the Upper Canada District School Board. Facebook courtesy photo